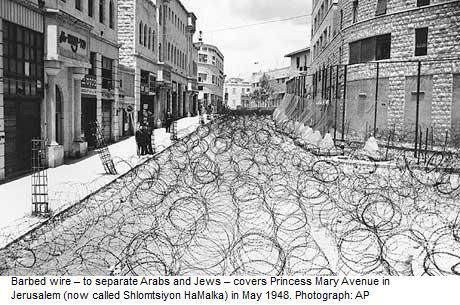 British officials predicted war – and Arab defeat – in Palestine in 1948

The British government knew from the moment it planned to withdraw its forces from Palestine more than 60 years ago that partition of the territory and the founding of the state of Israel would lead to war and defeat for the Arabs, secret documents released make clear.

The documents, which have a remarkable contemporary resonance, reveal how British officials looked on as Jewish settlers took over more and more Arab land.

In the weeks leading up to the partition of Palestine in 1948, when Britain gave up its UN mandate, Jewish terrorist groups were mounting increasing attacks on UK forces and Arab fighters, the Colonial Office papers show.

And they reveal how senior British officials were occupied in deciding how to allocate between them two Rolls-Royces and a Daimler.

The papers, released at the National Archives, show how in regular intelligence reports to London, British officials in Jerusalem described a steady build-up of tension as Britain, the US, the United Nations and Zionists moved towards the partition of Palestine.

As early as October 1946, two years before partition, UK officials warned London that Jewish opinion would oppose partition “unless the Jewish share were so enlarged as to make the scheme wholly unacceptable to Arabs”.

British officials warned the colonial secretary, George Hall: “The Jewish public … endorsed the attitude of its leaders that terrorism is a natural consequence of the general policy of His Majesty’s Government”, including turning away ships carrying “illegal” Jewish immigrants.

Moderate Jewish leaders were frightened of being called quislings, British officials told London, referring to collaborators with Nazi Germany in occupied countries. The next UK intelligence report referred to “effective pressures which Zionists in America are in a position to exert on the American administration”.

After an increase in violent attacks by the militant Zionists of the Stern group and Irgun, British officials reported later in 1946: “Arab leaders appear to be still disposed to defer active opposition so long as a chance of a political decision acceptable to Arab interests exists.” But they warned: “There is a real danger lest any further Jewish provocation may result in isolated acts of retaliation spreading inevitably to wider Arab-Jewish clashes”.

A report dated October 1947 refers to Menachem Begin, commander of Irgun, stating in a press interview that “the fight against the British invader would continue until the last one left Palestine”.

Begin was later elected prime minister of Israel and signed a peace treaty with Egypt’s president Anwar Sadat in 1979, for which the two leaders were awarded the Nobel peace prize.

By early 1948 British officials were reporting that “the Arabs have suffered a series of overwhelming defeats.” They added: “Jewish victories … have reduced Arab morale to zero and, following the cowardly example of their inept leaders, they are fleeing from the mixed areas in their thousands. It is now obvious that the only hope of regaining their position lies in the regular armies of the Arab states.”

London was warned: “Arab-Jewish violence is now diffused over virtually all of Palestine”. A few days later, British officials spoke of “internicine [sic] strife” and the “steady influx of Arab volunteers” from neighbouring countries.

The papers show that two years earlier, British intelligence officials were reporting “disturbing indications of a revival of political interest and activity among the rank and file of Palestinian Arabs … The decision to admit Cyprus deportees [Jews deported to camps on the island] against the immigration quotas, the impression that concessions have been made by His Majesty’s Government in deference to Jewish pressure and terrorism … have been instrumental in arousing Arab public feeling.”

Syria, then as now but for very different reasons, was a centre of concern for western powers. “Arab nationalism is moving towards another crisis. This is especially noticeable in Syria,” said a report drawn up during the second world war for British intelligence officers and propaganda chiefs.

There was a widespread view then that Syria and Lebanon would be handed back to France once the war was over. “Syria may be the scene of the next act of the Arab Revolution,” added the report, referring to a feeling of humiliation in the Arab world.

The wartime report drawn up for British intelligence officials said Arab nationalism had a “double nature … a rational constructive movement receptive of western influence and help [and] an emotional movement of revolt against the west”.

It concluded: “The conflict between these two tendencies will be decided in the present generation. The first aim of the policy of the western powers must be to prevent the triumph of the second tendency.”

Among the classified papers released today is a report on how to share out cars among the British diplomats and intelligence officers who would remain in Jerusalem after partition. A seven-seater Rolls-Royce was described as “a big fast car”.The problem, the report says, was the UK high commissioner in Palestine, General Sir Alan Gordon Cunningham “intends to bring it home for use in the UK protem [sic]”.

Another Rolls was described as “an excellent car except that for prolonged fast touring in the country it has not quite enough power on hills”. An armoured Daimler, described as “the King’s air raid car” when it was in Britain, was said to be “slow owing to its weight”.

The state of Israel was proclaimed on 14 May 1948. The following day, the last remaining British troops withdrew and the first Arab-Israeli war began.