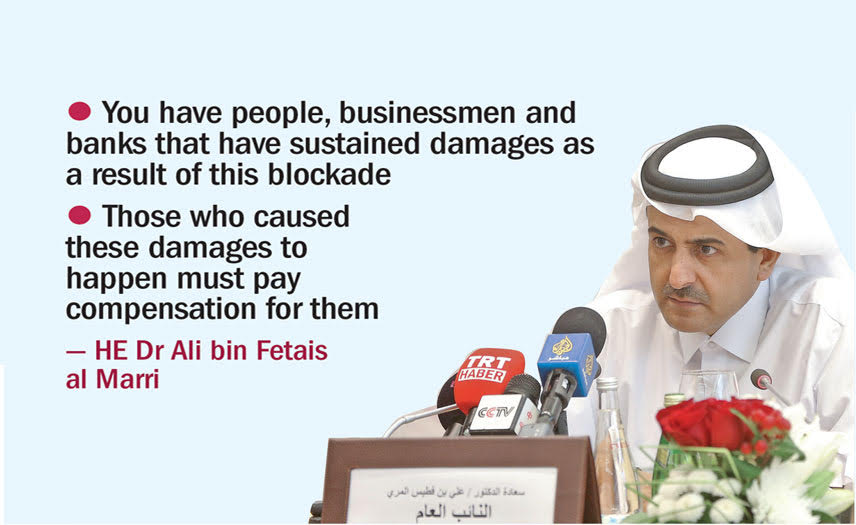 The Gulf crisis that pits a United Arab Emirates-Saudi-led alliance against Qatar is escalating in discreet but no less worrisome ways that effect major third-party commercial interests and could increase international pressure for a resolution of the dispute.

In a major shift away from Saudi and UAE restraint in attempting to force the international community and multi-nationals from taking sides in the 11-month dispute, prominent financial institutions are being sucked into the dispute that erupted last June when the alliance declared a diplomatic and economic boycott of Qatar.

Executives of JPMorgan and HSBC advised Qatar last month, according to The Wall Street Journal, that they would not be involved in the Gulf state’s$12 billion bond issuance because it could jeopardize their relationship with Saudi Arabia.

The kingdom in April rushed a $11 billion bond sale of its own, its fourth international offering, to ensure that it went to market before Qatar did.

Some bankers and financial executives have, moreover, reportedly been detained at UAE airports because they had Qatari visas in their passports before ultimately being granted entry into the country.

Saudi Arabia, in an unusual move, took the market by surprise when it launched its bond without embarking on a traditional roadshow to market the offering and sought to complete the transaction in one day. The issuance was oversubscribed almost five times.

The Saudi attempt to undermine Qatar failed given that the Gulf state’s sale was similarly oversubscribed.

“This reflects the strength of the Qatari economy and the confidence of international investors,” a Qatari official gloated.

HSBC was one of the Saudi bond’s global coordinators while JP Morgan was one its lead managers. The two banks helped arrange Qatar’s last sale in 2016 of a $9 billion bond. Neither was involved in the most recent Qatari sale which was arranged among others by Deutsche Bank, Barclays and Credit Suisse, banks in which Qatar has significant stakes.

In January, Doha Bank, Qatar’s fifth-biggest lender, was forced to reduce the size of a two-year, $575 million bank loan that it had raised in December 2015 to $400 million, when it sought a one-year extension of the facility because Chinese, Hong Kong and Japanese banks opted not to participate.

The financial reverberations of the Gulf crisis contrast with failed attempts by the UAE-Saudi alliance in the immediate aftermath of the declaration of the boycott to strongarm African nations into supporting their punitive measures against Qatar.

Omar Ghobash, the UAE’s ambassador to Russia, suggested at the time that the anti-Qatar alliance could “impose conditions on our own trading partners and say you want to work with us then you have got to make a commercial choice.”

The quiet tit-for-tat between Qatar and international banks suggests that Saudi Arabia and the UAE, frustrated that Doha has proven to be resilient enough to resist surrendering to the alliance’s demands, have decided to step up the pressure.

The UAE and Saudi Arabia accuse Qatar of supporting militants and political violence, maintaining close ties with Iran, and interfering in the domestic affairs of its neighbours – accusations Qatar denies. Accepting the alliance’s demands would effectively amount to Qatar compromising its sovereignty and ability to chart its own, independent course.

The Wall Street Journal’s disclosure of the tit-for-tat with financial institutions comes days after newly appointed US Secretary of State Mike Pompeo on his first overseas trip in his new job told Saudi leaders in Riyadh that “enough is enough” and that the Gulf crisis must be brought to an end.

Stopping the rot in its tracks and averting the potential impact of the crisis on multi-nationals is certainly not the only reason for Mr. Pompeo’s stepped-up pressure on Saudi Arabia and the UAE. The United States wants to see a united front among its Middle Eastern allies as President Donald J. Trump gears up for a possible withdrawal on May 12 from the 2015 international agreement that curbs Iran’s nuclear program.

Nevertheless, forcing financial institutions to take sides in the Gulf crisis challenges Mr. Trump’s America First approach to policy and the interests of major US corporations – a move the president is unlikely to view kindly.

If financial institutions are continuously forced to take sides, Saudi Arabia and the UAE could decide to target other economic sectors as well as Asian nations that depend on the export of labour to the Gulf.

Countries like Bangladesh and Pakistan, two of the most populous Muslim states, as well as India, home to the world’s fourth largest Muslim population, fear that Saudi Arabia could threaten to expel millions of migrant workers and expatriates in a bid to force them to join the boycott of Qatar.

Saudi Arabia has a history of using as leverage migrant workers, whose remittances constitute the backbone of foreign currency liquidity of many supplier countries and whose Gulf jobs reduce pressure on domestic labour markets.

Thousands of foreign workers in the kingdom have in recent years already lost their jobs as a result of Crown Prince Mohammed bin Salman’s efforts to replace them with Saudi nationals and financial difficulties encountered by major corporations like the Saudi Bin Laden Group and Saudi Oger.

Speaking to the BBC last June, former Bangladesh ambassador to Saudi Arabia Abdul Momen Chowdhury warned that “nothing is impossible” in how the kingdom might seek to build support for its campaign against Qatar. “If anyone obstructs what they want or does not agree with their opinions, they are never hesitant to act.” Mr. Chowdhury said.

Potential Saudi and UAE efforts to increase pressure on Qatar would reflect the fact that the two countries have boxed themselves into a corner by refusing to negotiate with the Gulf state unless it first accepts their demands.

The Gulf stalemate is reinforced by the fact that the international community has by and large refused to back the Saudi-UAE position and repeatedly called for a negotiated solution.

So far, the tit-for-tat with financial institutions has not forced any of the banks and financial majors to close offices on one side or the other of the Gulf divide.

Nonetheless, in a sign of the times, JP Morgan remains the region’s top merger and acquisition advisor, but no longer ranks among the top five banks in Qatar in terms of revenue. For the first time in nearly a decade, it doesn’t even rank among the Gulf state’s top 10.

Said a private equity firm executive in the Gulf: “If this continues, international banks will increasingly be forced to choose sides. That would take the Gulf crisis to a new and dangerous level.”