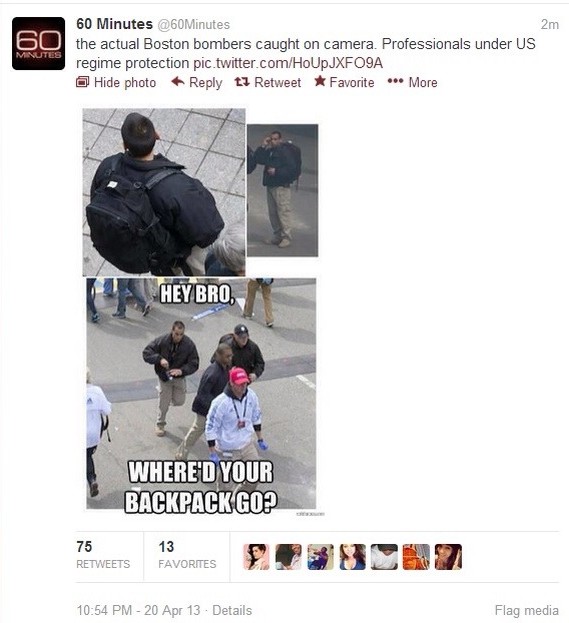 The mainstream media’s refusal to report on images showing private military operatives on the scene of the Boston bombings carrying heavy backpacks prompted hacking group the Syrian Electronic Army to take matters into their own hands by hijacking CBS 60 Minutes’ Twitter account and sending out tweets exposing unanswered questions behind this week’s attacks.

“The attack occurred while a “48 Hours” special about the Boston Marathon bombings was airing on the same network,” reports Boston.com.

The tweets sent out by the group mainly focused on the Obama administration’s support for Al-Qaeda militants in Syria, but also brought attention to an issue which has been subject to a corporate media blackout since it first emerged – the presence of numerous identically dressed men who were caught on camera immediately before and after the Boston bombings wearing black backpacks and behaving as if they were engaged in some kind of security exercise.

“The actual Boston bombers caught on camera, professionals under US regime protection,” one of the tweets stated. “The US government is hiding the real culprit of the Boston bombing,” added another.

Any proper investigation into the Boston bombings would at least have to address the question of why men carrying backpacks almost identical to those used by the accused bombers are pictured communicating on satellite phones immediately before and after the blasts.

Were the men involved in a bomb drill that was reported by eyewitnesses on the morning of the marathon? Why have police refused to acknowledge that they were running any kind of exercise? Why did authorities announce that they had arrested a suspect only for the FBI to reverse the story and cancel a press conference shortly after images emerged showing not only middle eastern men but also private employees of the security firm Craft International carrying backpacks? Why have Craft International failed to explain why their men were at the scene of the blasts? Why was a Saudi national detained as a “person of interest” in connection with the attack yet subsequently deported on “national security” grounds after President Obama held an unscheduled meeting with the Saudi Foreign Minister?

All these questions have gone unanswered by the corporate media, who acquiesced to the FBI’s demand that photos showing other potential suspects at the scene of the bombings should not be “deemed credible” and that no further inquiry was necessary.

View more of the tweets that were sent out by hackers below.