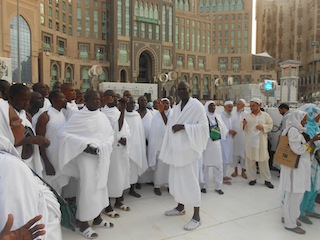 The set time is now for Hajj Islamic Pilgrimage to the Holy lands of Makkah and Madinah in Saudi Arabia. According to Islamic rites, the 12th month of the Islamic calendar, Zul Hajj as the name bears, is the month of Pilgrimage.

Hajj is among the five pillars of Islam. It is mandatory for every Muslim to go for Pilgrimage to the Holy lands so far he is able to do it.

History of pilgrimage could be dated back to around 1343, when Islam was first introduced in Hausa lands. Perhaps, 100 years before in Borno Empire. Ever since then, thousands of Islam faithful go for the Holy ritual.

Unfortunately, there is still no bilateral commission with Saudi Arabia despite our good and cordial relationship. It is estimated that at least, one million people travel to Saudi Arabia for various reasons. Thousands of Nigerian pilgrims are now in the Holy land since the official launch of the airlift in Jigawa earlier this month.

This Hajj should be different from other Hajj that Nigerians observed. In this Hajj, Nigerians should intensify prayers for Nigeria as our dear nation is facing its most serious challenges since its creation 100 years ago. Pilgrims from Nigeria should not afford to sleep during their 30 days or a little longer stay in the Holy land. They should stay awake in prayers as Nigeria’s problems are reaching their unprecedented levels.

The current blood shed going on in the Northern part of the country and fast spreading to other regions is enough reason why Nigerian pilgrims should not sleep but stand in prayer for the nation in the Holy land. Hundreds abducted, thousands have died and millions are now displaced in the North Eastern states of Borno, Yobe and Adamawa states. Nigerian pilgrims should remember this and pray vehemently for those affected and never relent in praying for peace.

Another reason why the pilgrims should pray for the country is the issue of high rate of corruption and looting of public funds. Corruption is at its apex in Nigeria. Just recent $20 billion went missing; over N600 billion of the pension fund was stolen. A serving minister bought airplane of about N10 billion; another female minister who resigned bought two cars of about N300 million and among others.

The third reason Nigerian pilgrims must remain awake in prayers is the outbreak of Ebola Virus Disease. So far, the virus has claimed the lives of about ten Nigerians. With no known cure for the virus, our pilgrims should pray to Allah to help us end this virus in Nigeria and in Africa.

The sophisticated development of bribery is another reason for them to pray vehemently for the nation. From Katsina to Sokoto, there are over 20 road blocks of Military and Paramilitary officers collecting bribes before they can allow your passage; N50 for the military and N20 or even N10 to other uniform men. This is sad and dangerous. Our security officers now compromise national security for N50 or N20. Pilgrims from those areas must remain in prayers for God intervention.

Pilgrims from Zamfara State should remember the Lead poisoning and remain awake in prayers for Allah to intervene. Not to forget the arm bandit that regularly besiege Birnin Magani Local Government and other areas in the state killing people and displacing thousands.

Pilgrims from Zamfara, Nasarawa, Jos, Kaduna and Benue State must remain awake in prayers seeking the assistance of Allah to end religious and tribal conflicts in the states. Prayer can move a mountain. There is nothing Allah cannot do. Pray for peace and you will have it.

Desert encroachment and oil spillage is fast grabbing our lands; pilgrims from the affected states should pray to Allah to halt it.

The federal government should please ensure the speedy establishment of bilateral commission and other important relationship ties with Saudi Arabia as this will help solve the problems of  Nigerian refugees in Saudi Arabia.

This pilgrimage is certainly the last before the 2015 general elections, Nigerian pilgrims should pray to Allah to give us better leaders, protect our lives and properties and give us peace and tranquillity.