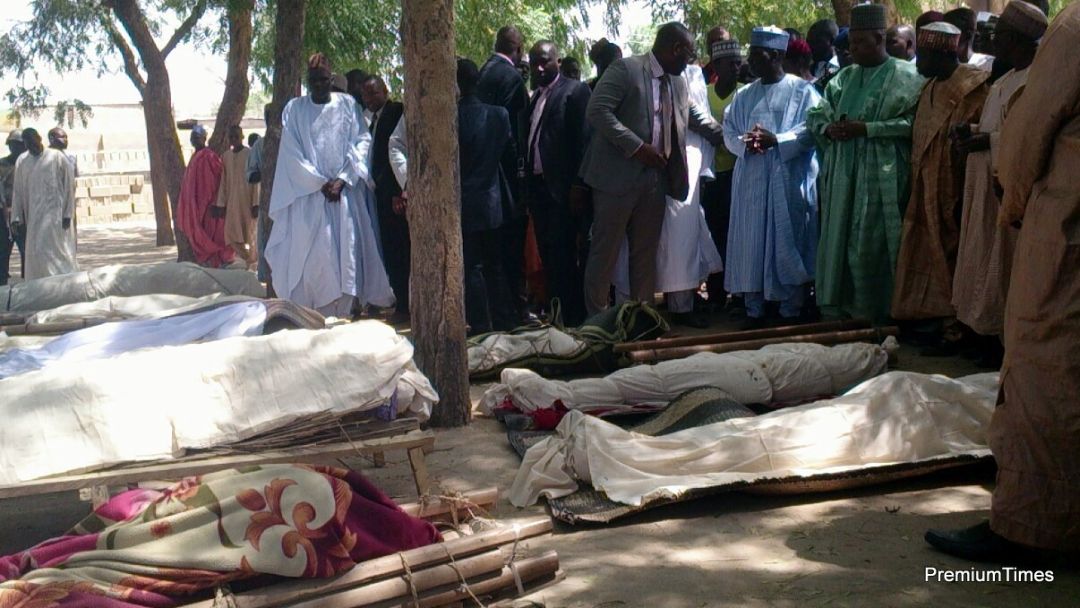 Then why is the north inviting on itself a fresh episode of intractable crises sponsored from outside this poor continent? Why is the north begging for a fresh new calamity and humanitarian tragedy? Why are we again reading everywhere we turn a promise to kill all the Shia in the north? Why are we hearing and again reading calls for bloody murder of those who perhaps see things different from the northern presumed majority? Why is the northern so-called majority again threatening a minority in its midst? Has the north not yet learned from the years of pain Nigeria suffered when the best behavior to ‘guests’ and those ‘different from us’ was set aside and there was a senseless pogrom against the Igbos?

Was the 2 million Igbo Nigerian deaths not enough for us? Have the million deaths according to locals, in the northeast and over 2 million displaced not yet satisfied us that we wish to usher on another fresh episode while the previous is not yet even technically over? Does the north not regret its failure to promptly condemn Boko Haram and wipe them out in Jihad in their birth days, but rather leaving them as a ‘problem of the Kanuris,’ with many northern governors paying them to stay out of their States? Does the eager to rise up and murdering innocents in ‘Jihad’ for some dumb, harmless beauty pageant, allegations of or ripping of pages of a book, albeit Holy; but cowardly, cowering when a real heroin-smoking enemy of the Prophet raises its head in Sambisa and abducts your daughters and rapes your mothers, north not think it is time it gets some sense and empathy?

Why I ask, did the governor of Kaduna and Nigerian army exhume the graves of the Shia Muslims? Why I ask then does the General from Buratai village where Boko Haram has taught us the ugly lesson of extremism and hate, fanatically kill hundreds of our frustrated youth in a vengeful show of excessive force and ‘because-I-can,’ to fuel more pain, strife and more potential bloodshed and breakdown of the north in Boko-Haram Baga style? Why I ask does the north extra-judiciously demolish structures of those it disagrees with or feels angst for to fester hate, sentiment and provoke disunity, disdain and disorder in the crippled north? And most importantly I ask, why do the northern youth, victims of years of trouble celebrate the extremism, celebrate the erroneous approach to social justice and conflict resolution and dance and fan the embers of war, promising fire and brimstone on those they perceive to be different from them?

Have they ever considered the true population of their type in the north? Do they really realize that the north is not as harmonious and homogenous as they think? That among their numbers, there are 20 million Almajiri children and adults, abandoned by society who may not see things as them? That there are 10 million bleeding Kanuris who may not forgive the way they were fought for no purpose by Dan Fodio in the past and abandoned during the Boko Haram pogrom in the present, and may not always partner with them? Do they not realize that even though they may feel one who is like them is at the helm of power today, tomorrow, like Yesterday, it may not be so? Do they not see that even assuming the Shia millions-strong minority did not vote for them this cycle, at least for a certainty, they did not collect their N1 billion offer from the benevolent Prince of the Sokoto Caliphate to vote against them? And think that what if the next turn the Shia Muslims and the many of us empathic of their oppression and suffering and of their denial of their constitutional rights to freedom, decide to vote enmass against the arrogant ones as a means of revenge, their plight may remain as sorry as it is today? Are they not afraid of war, that these poorest-of-Africa wish to fight a Takfiri war sponsored by Wahhabi rather comfortable house of Saud?

Does the Quran verse, “...and let not hatred of any people seduce you that ye deal not justly. Deal justly, that is nearer to your duty. Observe your duty to Allah. Lo! Allah is Informed of what ye do.” @ 5:8 not resonate in any way with the Muslims among them?

If You Live To Fight, How About A Theological Battle?

Do they not know that from a theological point as the Zaria pogrom has made me study and find out, Authentic Hadith promise two Weighty things, The Quran And Ahlul Bayt as those they hate defend and they appear to neglect? That Authentic Hadith do actually promise 12 successors, while they decide that they know better and cut it to 4? And that Authentic Hadith appear to proclaim Ali as the successor as those they hate simply say? Indeed are they fit to engage intellectually or like Dan Fodio against Shehu al-Hajj Muhammad al-Amîn ibn Muhammad al-Kânemî, where they fail to engage in theological discourse to justify a desired reason to subdue, they hope the might of ‘their’ army will help them conquer? They are quick to condemn for alleged curses (which there is actually a Khamenei fatwa against) to companions they appear to worship (while the Quran has advised caution for some), yet they support those who initiated curses at the Minbar to the nephew the very Prophet banished anyone from hurting. Do they not have reasoning? I am not saying they(we) are wrong, but perhaps you are not totally right, after-all as an example, is there any mention of a “Sunni-sect” in your Holy book? And if you do not take what I say, do you respect Dr. Zakir Naik, or Yasir Qadhi and consider what they say of unity and non-violence?

I ask, why do do they today appear to hate fellow Muslims more than they hate any other peoples? Or is this (scarily) how they hate everyone else? Or is it that they simply always must find someone to hate to death? How can you build a society by alienating not tens, or hundreds, or even thousands, but millions and their friends and fans at home and abroad!

I am sorry if I perchance hurt your feelings; but you did not think about mine, theirs or the abducted girls’ and before imperfect I or perhaps imperfect you are someday in their shoes, I say it as it is.