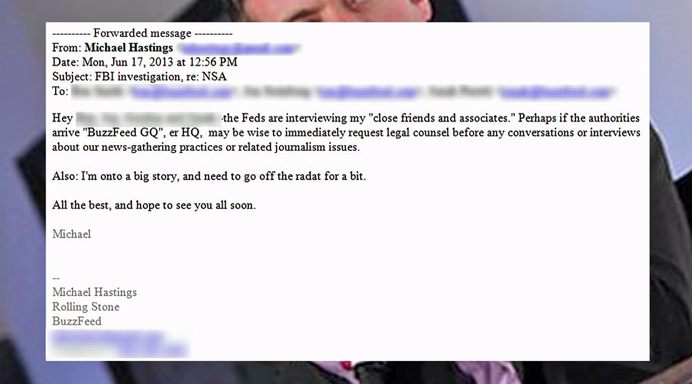 Despite FBI assertions to the contrary, journalist Michael Hastings was under investigation by the FBI. In an email sent out hours before his death, Hastings said his “close friends and associates” were being harassed by the FBI and he was going to “go off the radar for a bit,” in other words into hiding.

At 2:32 into this video, Michael Hastings says the Obama administration is at war with the press.

“Perhaps if the authorities arrive” at the news website Buzzfeed, they “may be wise to immediately request legal counsel before any conversations or interviews about our news-gathering practices or related journalism issues,” he wrote.

Buzzfeed editor Ben Smith added that Hastings had told friends and family “he was concerned that he was under investigation” for his journalism.

Wikileaks also confirmed that Hastings was under investigation by the FBI.

The establishment media is attempting to portray theories about the journalist’s death as unfounded and irresponsible conspiracies. “Since Hastings’ death early Tuesday, wild conspiracy theories have bloomed on the Internet, implying that he was murdered by powerful forces wanting to silence him,” the San Francisco Chronicle reported on Thursday, insinuating that Wikileaks is attempting to exploit the journalist’s death.

During a Reddit interview last year, Hastings said the military had repeatedly investigated him. “The Pentagon has launched three investigations into stories I’ve done over the past 18 months under the pretense of finding the wrongdoing we were exposing. But the investigations were really about creating a Pentagon approved official document to criticize journalism they don’t like,” he said.

Hastings also talked about government attempts to control the internet. “On the one hand, we’re already bombarded with so much government propaganda, it might be hard to notice,” he wrote. “But I think we’d definitely see a more direct targeting of certain communities within the U.S. with propaganda that was produced overseas. I think what we’d also see is all sorts of disturbing online and internet initiatives produced by the government. The Pentagon is already trying to do this.”

Prior to his death, Hastings was working on a story about Jill Kelly, the military socialite who received email messages from Paula Broadwell, the biographer who had an affair with former general and CIA director David Petraeus. Kelly believes the FBI leaked her name to the media to discredit her.

Earlier this month, Buzzfeed posted a final article by Hastings, “Why Do Democrats Love to Spy On Americans.”

As we noted on Thursday, Hastings was renowned for being “only interested in writing stories someone didn’t want him to write — often his subjects,” according to Buzzflash editor Ben Smith. “He knew that there are certain truths that nobody has an interest in speaking, ones that will make you both your subjects and their enemies uncomfortable. They’re stories that don’t get told because nobody in power has much of an interest in telling them.”