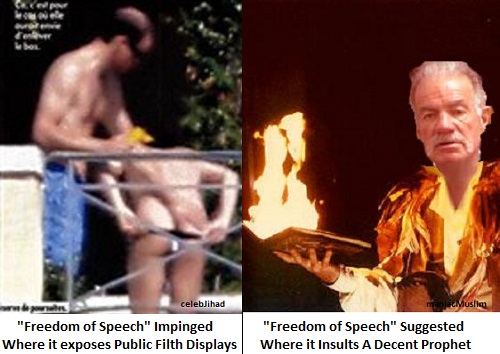 NewsRescue- As the magazine that published publicly taken photos of the future queen of England, Kate Middleton gets hammered fines for its ‘freedom of speech’. See CNN:

The court ordered Closer magazine to hand over the original photos to the royal family within 24 hours of the ruling and to pay them 2,000 euros (about $2,600).

And a French prosecutor opened a preliminary criminal investigation into the incident, the Nanterre prosecutor’s office said Tuesday.

The magazine must pay a further 10,000 euros a day if it is late in handing over the photos.

Our yesterday article pulls more sway. “Coincidentally” these two events happening at the same time in the western world, display the disparity in dealing with items of varying interest and respect to the western world, and how the so-called ‘freedom of speech’ is a fantasy and non existent.

Kate Middleton’s public displays of filth were reprehensible on her part. By all means, she in addition to the photographer should be rebuked by our standards. NewsRescue ordinarily would never publish such images, the only reason they are partially up right now is as a tough decision in clearly presenting the context of the present debate on freedom of speech and freedom to debase.

Should Hate Speech and Acts Against Islam Be A Crime? 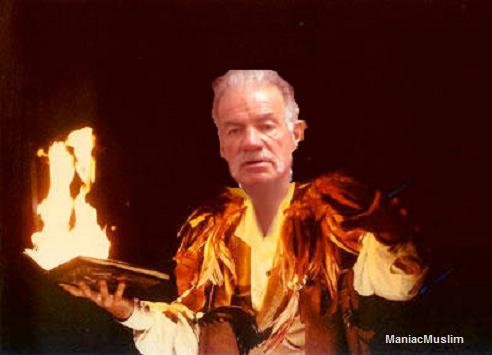 NewsRescue [Opinion]- In July 2010, Terry Jones, the pastor of the Christian Dove World Outreach Center in Gainesville, Florida, U.S., announced he would burn 200 Qurans on the 2010 anniversary of the September 11 attacks. On March 20, 2011, Terry Jones held a “trial of the Quran” in his Gainesville church. Finding the scriptures guilty of “crimes against humanity,” he burned it in the church sanctuary. Protesters in the northern Afghanistan city of Mazar-i-Sharif and elsewhere attacked the United Nations Assistance Mission, killing at least 30 people, including at least seven United Nations workers, and injuring at least 150 people.Jones disclaimed any responsibility. Norwegian, Swedish, Nepalese and Romanian nationals were among the UN workers killed. American news analysts criticized and blamed Hamid Karzai, president of Afghanistan, for drawing attention to the Quran burning.[wikipedia]

The United States legal system did not charge or prosecute pastor Terry Jones for any crime in the incitement of hate and deaths.

Sometime in July 2012, a Christian Coptic group with lead agent Nakoula Basseley Nakoula, who operated under an alias, Sam Bascile, made and promoted a movie that gravely insulted prophet Mohammed(P), the Muslim most dignified and emulated personality. Other Coptic Christians in his gang with also Terry Jones discussed ways to promote this hate movie in order to provoke global reactions and intolerance against Islam.

After the movie failed to gain traction on Youtube, where it was released, an extremist Coptic Christian US-Egyptian citizen whose Egyptian citizenship had been revoked allegedly due to his inciting hate and anti-Islamic sentiment in Egypt, Morris Sadek on Sept. 5th,  posted an Arabic version of the movie on his website and in conjunction with other fanatics emailed the video to numerous Arab media addresses. His website also hosts a front-page image of him standing by his partner, pastor Terry Jones. The movie hit its mark, Muslims got infuriated by it and the fact that the movie was associated to a gang of known, repeat offender fanatic Christians, Terry Jones and his ilk, with a known history of permitted acts of hate speech against Muslims in the US.

Sept 11: Riots broke out in Egypt, Libya and across over 21 countries including Sidney, Australia. The new Benghazi leadership-associated terrorists took advantage of the chaos and lax in security fostered by the riots and staged a sustained attack on the US consulate in Benghazi, killing two officers. These terrorists apparently with classified information from direct sources in the government, trailed escaping US officers to a hidden ‘safe house’, and conducted another sophisticated and sustained attack on the safe house killing two more US officers. In total Ambassador Stevens and 3 other US diplomats were murdered in the attack.

As a result of riots across the world dozens of people lost their life in the chaos and from police firings against protesters.

The question is- should US citizens who deliberately produce inciting hate speech movies or who do related acts, be charged and prosecuted? Should Terry Jones not have been incarcerated in the very beginning when he proposed a ‘burn Quran day’, and would this not have prevented this movie release and all deaths and sentiment associated? Does ‘freedom of speech’, also mean ‘freedom of hate speech’? Or is such an understanding and application of this so-called ‘freedom’, only applicable when the hate speech is directed towards Islam? Does freedom of speech mean freedom of the beast?

If we examine the way Holocaust deniers are treated in most European nations we do see a precedent for such aggressive acts of law. Verily the reason why the Jewish Holocaust denial is treated with such aggressive legal repudiation is not because such denials or queries can change the events of the past, but rather because of a Jewish worry about the future. ‘Never again’, is the popular phrase used to accompany memories of the Holocaust. Jews aggressively pursue ‘justice’ against Holocaust deniers purportedly to prevent hate and the death of Jews in the future.

Can the same not be attributed to Islam hate speech promoters, since it has been well demonstrated that these events lead to global hate and the loss of lives of Muslims and non Muslims?

British historian David Irving has been found guilty in Vienna of denying the Holocaust of European Jewry and sentenced to three years in prison.

He had pleaded guilty to the charge, based on a speech and interview he gave in Austria in 1989.

“I made a mistake when I said there were no gas chambers at Auschwitz,” he told the court in the Austrian capital.

Irving’s lawyer said he considered the verdict “a little too stringent”.

There are many more examples of instances where hate speech is not tolerated in western societies. These include- referring to blacks as ‘Niggers’, or ‘Nappy heads’, disrespect of the gay community, including referring to gays as ‘faggots’, and a host of other actions that could lead to arrests and other repercussions.

In the global war against terrorism, several families including those of US citizens, have been wiped out in US launched drone attacks, due not to actual acts of terrorism, but ‘merely’ for allegedly inciting violence against American interests.

Indeed the president of Iran and the people of Iran are targeted, sanctioned and an Alqaeda insurgency is sponsored against them, as also is a war pending upon them, invariably due to ‘mere’ statements requesting an impartial investigation of the actual events of the Nazi Holocaust by the president.

Hezbollah leader Nasrallah in Lebanon yesterday following the Pope’s visit called for a week of protests against the US promotion of such hate movies, across Lebanon. He stated that he delayed the call in recognition of the Pope’s visit, till after the Pope left.

Is it time the US recognized the danger of hate speech against Islam and instituted new policy to punish such instigating acts that clearly provoke Muslim-Western tension, sentiment and death? Would such a cheap to institute, sensible policy not protect life much more than billions spent in war with millions of lives lost via that route that yet fails to prevent and protect life, does? Or do we prefer war and blood?

A Nigerian commentator critiqued president Obama and Hilary Clinton for their being known to rush aggressively in the global defense of homosexual privileges, with harsh statements and threats of sanctions toward African leaders and priests who promote anti Gay sentiment in their countries, yet their failure to respond to similar anti-Muslim sentiments manufactured and propagated at home.

Do we say, ‘never again’ or we wait for the next radical fanatic to make the next hate release?