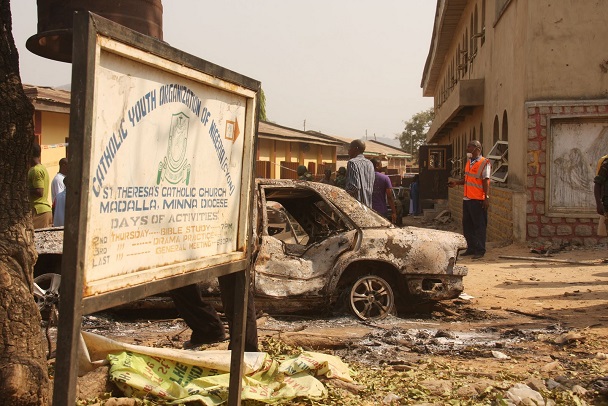 Boko Haram was sponsored to initially get sympathy for President Jonathan. Now it has backfired.

I am a Christian and let me tell you this. My church service starts by 9 am and it is just 20 minutes drive from my house. Now, it takes me at least one hour because of road blocks.

My children and wife have to step down for soldiers to search their bags whether they have guns or not. And this was the same Christian we voted for.

He has made church services impossible for us. He has made economic survival impossible. As a person, we have not seen jobs created for more than two years. They do not award contracts. They withdraw money from the CBN or from NNPC and they share it. The economy has collapsed.

This Christian president has killed Christianity. Forget the fact that he is going on church tourism. We are aware that he has destroyed the economy of the North. I do not know about the South, but in the North, we are so impoverished. If Jonathan returns in 2015, every northerner will have to be crawling to survive…

Anybody blaming northern governors of not doing enough is mischievous, stupid or naïve.  Let me tell you. The whole of the budget of north-eastern states go into security. The Federal Government does nothing. All the Hilux buses used by security agents in the region are bought by the governors. They also pay them allowances. That is part of our problem. State governors do not control the police or the military.

When Nyako was being impeached, all the members of the panel had three soldiers guarding them. Meanwhile, there was no security around Nyako’s house except his orderly….

Before when I leave Kaduna by 7am I will arrive my hometown in Adamawa state by 2pm, but now I always arrive by 10pm because of so many checkpoints that have not solved anything…

…. Forces of army and Boko Haram are decimating voting population in the region. They have occupied the land so that the people will not be able to vote. We have reasons to believe that the biggest beneficiary of Boko Haram and the destabilisation of the North-East is the PDP. They are the major beneficiary.”