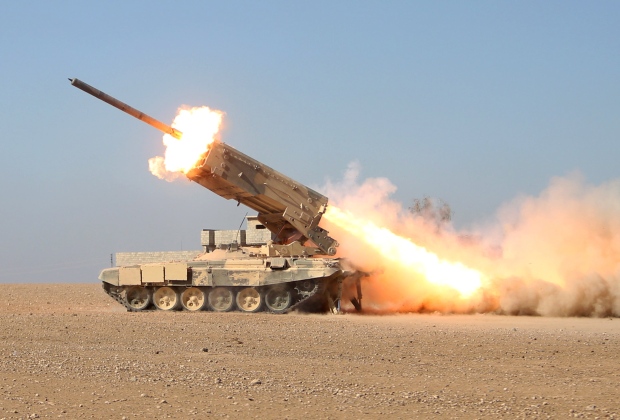 Since the Sept 11, 2001 terrorist attacks in the United States, military operations in the Islamic world have seen no end.

Afghanistan and Iraq were invaded. Some three million Muslims lost their lives. Libya was bombed for months and, ultimately, its government collapsed.

Today, the people of a once prosperous country can hardly find food. Syria has been suffering bombardment every day for the past five years. More than 600,000 people lost their lives, and six million were forced to leave their homes and lands.

Yemen has been dragged into a Shia-Sunni conflict. When the street skirmishes in Iran under the banner of the Green Revolution, the failed coup attempt in Turkey, the successful putsch in Egypt, the barely prevented Shia-Sunni civil war in Bahrain and the tensions between Saudi Arabia and Iran that escalated to the brink of all-out-war are also taken into consideration, it is easy to see the danger the Islamic world is facing.

The military operation recently launched in Mosul has raised this danger to a higher level. An armed force consisting largely of Shia militiamen launching an operation on a Sunni city of one million may light the fuse of a sectarian war that could spread to the entire region.

With its several millennia of history, the Middle East has been the cradle of civilisations. It is the centre of three great religions and home to scores of nations. Considering any Middle Eastern city independently of its history is a major mistake. With its 4,500 years of history, Mosul is an ancient city. It has been 1,400 years since the city embraced Islam. It was annexed by the Seljuk Empire 1,000 years ago, and it became an Ottoman territory 500 years ago. From that time until the British occupation in 1918, it was the capital of the Ottoman Empire’s Mosul Province.

The present day territories of the Middle East are artificial borders drawn by Britain. These borders set heavily mined frontiers and barbed wire fences between people who had lived together for centuries. Mosul’s population consists of Turks and Kurds. Mosul Province spreads over a 90,000sq km area, including the lands of the current Northern Iraqi Kurdish administration.

Mosul came into British imperialism’s sphere of interest after the discovery of its oil fields, and following the World War 1, it was invaded in defiance of the Armistice of Mudros. No conclusion could be reached regarding the Mosul issue in the Lausanne Treaty, which established the borders of the then newly founded Turkish Republic.

There are two articles in the Treaty of Ankara signed in 1926 that have an effect on today’s circumstances: When signing the treaty, the Turkish State put an annotation onto these two issues. Consisting of Turks and Kurds, the people of Mosul would become a minority in an Arabic Iraqi state. For that reason, the protection of minority rights was among Turkey’s conditions to sign the treaty. Moreover, according to this treaty, in the case of Iraq’s territorial integrity being compromised, Turkey would retain the right to appeal to the United Nations and call for a referendum for the Mosul region to determine its own future.

Today, the main policy of the Turkish state is to protect the rights of all peoples in the region, including the Turks, Kurds and Sunni Arabs, who settled in the area later. Furthermore, the communist separatist organisation the PKK (Kurdistan Workers’ Party) is active in the region. Turkish intelligence has information that the Iraqi Army that attacked Mosul included 3,500 PKK militants.

The Turkish government anticipates that a government founded under the cooperation of the PKK and Shia militia forces in a post-operation environment in Mosul will drag the region out of the frying pan into the fire, which is not an unjustified presumption at all. Turkey wants to have a say in the matter in order to prevent any such fait accompli.

The Shia militias have carried out wide-scale massacres in the previously captured Sunni cities such as Fallujah and Tikrit. A part of the Sunni population, who had organised to defend themselves against the massacres, later laid the foundations of the Islamic State.

The Iraqi Civil War, which has claimed 1.5 million lives, is the result of the mistaken policies of the US and British-led coalition. The region has been pushed into bloody sectarian wars. Today, it is still fraught with daily suicide bombings, and recurrent assassinations and civilian massacres. Despite its overwhelming military superiority, the coalition consisting of 85 nations is still a long way from bringing peace to the region. Many states have apparently put their own economic interests before the lives of innocent Iraqi people.

Seven aircraft carriers, about one hundred warships and tens of thousands of coalition troops are deployed in the waters of the Mediterranean, merely 500km west of Mosul. The missiles launched and warplanes taking off from these ships are bombing Syria and Iraq incessantly. No concrete plan for peace exists in the region. For that reason, through its own initiative, Turkey is taking measures to prevent further civilian deaths. The region is in need of Turkey’s common sense and historical experience.

Because of the Syrian Civil War, three million Syrians have taken refuge in Turkey. Today, there are Syrian guests in all the cities of Turkey. Hundreds of thousands of Aleppians are expected to set out to Turkey following the fall of Aleppo, which is located a mere 50km away from Turkish lands. Mosul is also facing a similar danger. The city centre of Mosul is only a 100km distance from Turkey.

In the event that the conflicts drag on and massacres continue in Mosul, the Turkish lands will once more be the only place for civilians in Mosul and the nearby city of Tal Afar to take refuge in. Turkey aspires to receive its fellow brothers and sisters with open arms.

With the Mosul operation, an attempt is under way to create an atmosphere of conflict between the governments of Iraq and Turkey. The fact is, however, that Iraq and Turkey are two friendly Muslim countries in the region. Mosul remains a subject of dispute between Turkey and the Shia Iraqi government, and thus, it leading to a sectarian war has now become a ubiquitous claim. However, not evaluating matters with a sectarian policy, Turkey is the protector of all the oppressed peoples, regardless of their faith or sect.

Based on the aforementioned artificial argument, the second phase of the plan will aim to justify the need for the continuous presence of the coalition forces in Mosul. Moreover, Mosul is planned to become an autonomous region under international supervision. The existence of such an autonomous and weak entity at the very heart of the Middle East will accomplish little else except lead to a war that will last another century.

The way to thwart this plan is through the alliance of the peoples of the region. Russia, Turkey, Iran, Iraq, Syria and Saudi Arabia should meet on minimum common grounds and close ranks.