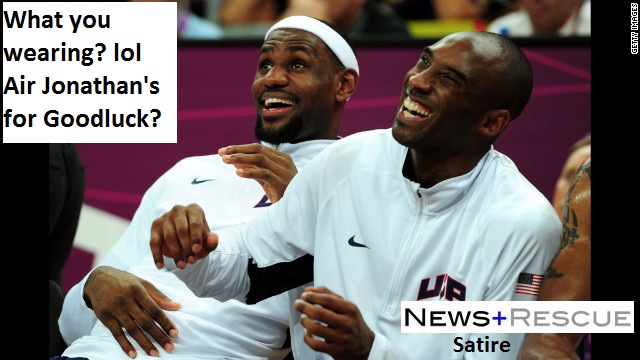 The U.S. men’s Olympic basketball team beat Nigeria 156-73 Thursday night, an epic blowout that answered the Americans’ detractors and sent a clear message to let them be.

After two opening games that provoked criticism of their slow starts and outside shooting, the Americans rewrote the record books.

They led by 26 in the first quarter, had an Olympic-record 78 points in the first half and Carmelo Anthony scored 37 points, breaking the U.S. single-game scoring record in less than three quarters.

We must include though, despite the loss, that this Nigerian point guard, was a one man army: Going up: Lebron James (left) makes one of his man dunks Star player: Russell Westbrook goes in for a dunk during the game, which helped quash any misgivings about the Americans’ performance in their prior two games

Incredibly, they eclipsed the 100-point mark before the third quarter ended.

‘When we get hot, it’s a big problem,’ Kobe Bryant said.

‘So you have all these guys on one team and then all get hot on the same night, it’s tough.’

The Americans had surpassed the previous Olympic record of 138 points set by Brazil against Egypt in 1988.

When the record was announced to the mesmerized crowd, all the players seated on the U.S. bench got up and walked single file past Krzyzewski, slapping hands with him and his staff. Victory: The Americans, led by star Kobe Bryant, smashed the previous record by winning with an 83-point margin of victory ‘It was just one of them nights where as a unit we had it going,’ Anthony said. ‘It could have been anybody out on the court playing against us.’

The Americans even one-upped the 1992 Dream Team, as Thursday’s  83-point margin of victory was the largest in U.S. national team history, eclipsing the 79-point spread when Michael Jordan, Magic Johnson and company beat Cuba 136-57 in their first game.

Prior to the opening of this year’s games, many- including President Obama- speculated on whether or whether or not the Dream Team was superior to this year’s crew, but tonight’s win seems to have shattered such speculation along with a slew of records.

Along with Anthony, NBA superstars Bryant and Russell Westbrook also made significant contributions to the team’s tally. Kevin Love and Kevin Durant put up double-digits as well. Breakout star: Though Anthony is known for his skills in the NBA, his performance helped give him a greater international presence

The Americans have won their first three games with ease, but now things are expected to get a lot tougher as they approach next week’s medal round.

After starting so sluggishly in blowout wins over France and Tunisia, the U.S. came flying out of the gates, led by Bryant.

The team seemed intent on breaking Nigeria’s spirit, and when that was accomplished with ease, they made a profound statement with their marksmanship.

Coach Krzyzewski gave his players the day off on Wednesday, a chance to relax and enjoy the games. American team spirit seemed to be on the agenda as Anthony and James Harden went to see boxing while Durant watched beach volleyball. Happy hands: The players appeared pleased with themselves throughout the game
Link: http://www.dailymail.co.uk/news/article-2183001/Olympics-2012-USA-break-records-basketball-winning-LARGEST-MARGIN-ever.html#ixzz22TREDmt9