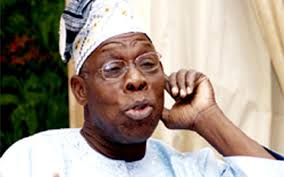 Former President Olusegun Obasanjo has blamed the rot in the country’s power sector on on the administrations that succeeded him, including the present under the leadership of President Goodluck Jonthan.

Mr. Obasanjo, who spoke at the ‘First Green Legacy Moment with Chief Olusegun Obasanjo on Leadership and Human Security in Africa’ in Abeokuta., Ogun State, said the foundation for the little supply of electricity the country was currently enjoying was laid by his administration.

According to him, successive administrations after his rule as military head of state between 1976 and 1979 failed to do anything in the sector in terms of power generation and distribution till he returned to power in 1999 as elected president.

Before his exit in 2007, the former President said his administration’s estimate was that the country needed to generate an average of 2,000 megawatts (MW) annually to ensure stability in electricity supply.

He said after he handed over power to the late former President Umaru Yar’Adua, no significant achievement was recorded in the power sector till he died, adding that the situation has deteriorated since President Goodluck Jonathan took over in May, 2010

“Leaders in the country lack the political will to confront national challenges,” Mr. Obasanjo said,

He said any leader worth his salt should know that power is very important, and his understanding of what constitutes development was the driver of all developments, be it social, economic, and even political.

“When I was military head of state, I developed the Jebba Dam, I developed Shiroro, I started Egbin. Shagari came and completed Egbin and commissioned Jebba and Shiroro.

“Between Shagari in 1983, until I came back in 1999, there was no single dime invested in power generation. If anything, the ones that were there were allowed to go down.”

A country like Nigeria, he said, must be adding not less than 2,000 MW of electricity every year if it must move on the path of sustained national development.

“If you will remember, when I came back in 1999, my first Minister of Power was late Bola Ige. I won’t say Bola didn’t know what he was doing, and he said publicly that he would fix the power problems in six months.

“After one year, Bola Ige couldn’t fathom what was wrong with power. It was riddled with corruption. Then we had no money. People have forgotten that in 1999/2000, the price of crude oil was $9 per barrel. So, I wanted the oil companies, Mobil, Total and they wouldn’t go.

“When we started having money, we started the National Integrated Power Plant (NIPP). When we said the money we had should be invested in power, my successor didn’t understand; he stopped it.

“If for almost 20 years we did not achieve anything in power generation, then we may not be able to get it again,” Mr. Obasanjo said.

Citing South Africa as an example of how a country’s power sector should operate, the former President said with a population of about 55 million, the country is generating an average of 45,000 MW of electricty through various sources, while Nigeria with about 180 million people could not generate 4, 000 MW.

He said for the country to claim to be an industrialising economy, it must be generating much more than South Africa, say 100,000 MW.

Even if the country got to that point South Africa is today, Mr. Obasanjo wondered how many years it would take if only 2,000 MW of electricity generation was added to its generation capacity every year.

“For us to get to 100,000 MW, I leave the mathematics to you. It sounds very discouraging, but that is the reality,” he said