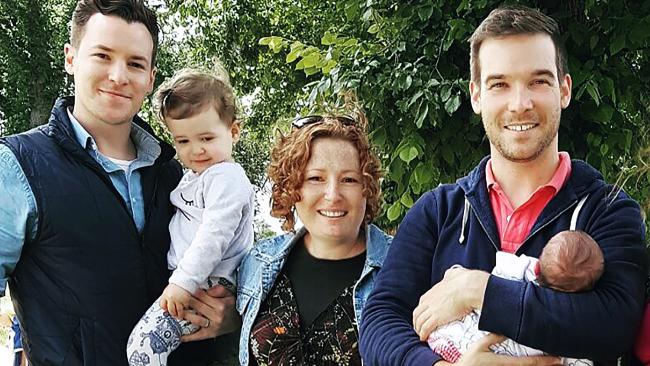 For a second time, a sister carried the baby of her homosexual brother to borth his second child.

Rhiannon Stevens, 35, from Melbourne, first offered to become a surrogate for younger brother Clinton when he “came out” 14 years ago.

After meeting his partner Callum, 33, the pair tied the knot in 2012 and began to pursue their dream of becoming parents.

But with adoption and international surrogacy proving difficult for the couple, Rhiannon, a mum of three, stepped in to help.

Using a donor egg and the couple’s sperm, Rhiannon became pregnant with their eldest daughter Zara, two, after a successful embryo transfer in 2014.

Now she’s also given birth to their second daughter, Aiden, who was born just three weeks ago, making the couple proud parents for the second time.

Rhiannon said: “I’ve always said that when the time came, I’d help Clinton to have a child.

“It felt like the most natural thing in the world to offer to be his and Callum’s surrogate. I’ve never been concerned about having any difficulty handing the baby over to them at the end of the process.

“After Zara was born, it only took me three months to offer to go again. Read full on news.com.au

Featured image: Rhiannon (centre) has made her brother’s dreams come true, becoming a surrogate twice for him and his partner. Picture: Caters News