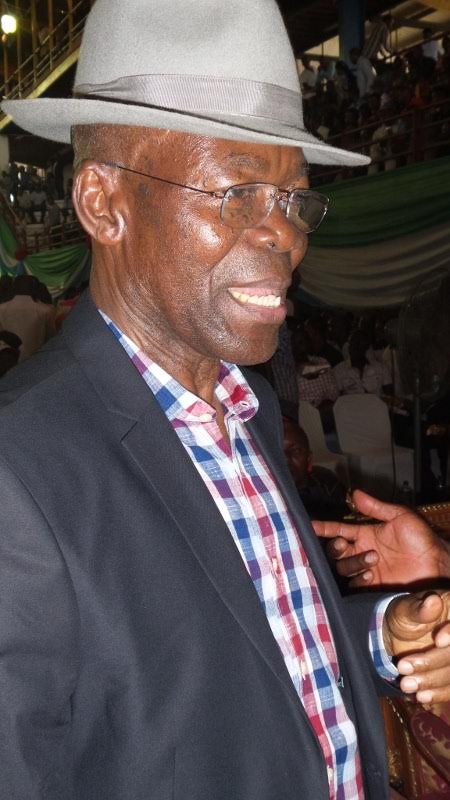 In my efforts to present and highlight the capabilities of the candidates presented by All Progressives Congress (APC) for the February,6th, 2016 re-run elections, permit me this time to present before you a man described in some quarters as the Leader of leaders and embodiment of what selfless services entails. HON. ANDREW IGBONULE UCHENDU was a 1992 recipient of the Federal Government National Productivity Merit Award, the highest honour that can be conferred on any worker in the public service in Nigeria, he was in 1994 drafted into politics by the Ogbakor Ikwerre Cultural Organisation. He represented Emohua, Ikwerre and Obio/Akpor LGAs at the 1994/1995 National Constitutional Conference.

One of the best members of the House of Representatives, Hon. Uchendu has moved six crucial motions. These include the motions on Ogbakiri crises, Rehabilitation of the East/West Expressway, Establishment of the Oloibiri Oil Museum, Youth Unemployment and Youth Restiveness in Nigeria, Insecurity in the Niger Delta, and the Invasion of the Rivers State House of Assembly by Hoodlums. He has, in addition, sponsored three fundamental Bills in the House. They are the Standard Tendering Procedure for the Award of Contracts in the Public Service (popularly known as Due Process), the National Youth Development Programme, and the Amendment to the Petroleum Technology Development Fund Act.

ANDREW IGBONULE UCHENDU was born more than sixty three years ago to the Royal family of Uchendu Osi in Mgbuitanwo, Emohua. He obtained his First School leaving Certificate in 1962, West African School Certificate (Grade one) in 1971 and attended the Hope Waddell Training Institute, Calabar, where he acquired his Higher School Certificate (HSC) in 1973.

In 1973, he was admitted into the prestigious University of Ibadan, where he graduated with B. Sc (Hons) Second Class (Upper Division) in Agricultural Economics.

He worked in so many Organizations including the Rivers State Ministry of Commerce and Industry, Nigerian Agricultural and Cooperative Bank Ltd, Kaduna and the Niger Delta Basin Development Authority. In 1985, he applied to be the Secretary to the Board of Risonpalm Ltd. After a very rigorous interview, he was appointed the General Manager/Chief Executive Officer in March, 1985. In 1989, based upon his performance, he was elevated to the position of Managing Director/Chief Executive Officer, and thus became the first Managing Director of a Rivers State-owned Company. During his tenure in Risonpalm, the Company made profits in seven consecutive years. In consideration of this excellent performance, the Federal Government conferred on him the 1992 National Productivity Merit Award. This award is the highest honour that can be conferred on any Worker in the Public Service in Nigeria. Andrew Uchendu disengaged from the services of Risonpalm in September, 1993.

In 1994, the Ogbakor Ikwerre Cultural Organization drafted him into politics, thus becoming the first Ikwerre man to be so honoured by his people. He represented Emohua, Ikwerre and Obio/Akpor LGAs in the 1994/1995 National Constitutional Conference. He fought with other Compatriots in Ikwerre to ensure that the Ikwerre Ethnic Nationality was not split into two separate proposed States during the Conference. He has since then been in active politics. From 2003 to 28th May, 2015, he represented the Ikwerre/Emohua Federal Constituency. He is now the APC Flag bearer for the Rivers East Senatorial District for the 2015 General Elections.

During his tenure as a Member of the House of Representatives, Hon. Andrew Uchendu moved about six motions namely, Ogbakiri crises, Rehabilitation of the East/West Expressway, the Establishment of the Oloibiri Oil Museum, Youth Unemployment and Youth Restiveness in Nigeria, Insecurity in the Niger Delta and the invasion of the Rivers State House of Assembly by Hoodlums. This last motion led to the take-over of the Legislative functions of the House by the National Assembly. It is worthy of note to mention that the resolution taken by the House on the crises stemmed the imminent mayhem and bloodletting that would have taken place.

He sponsored three fundamental Bills in the House. They are: the Standard Tendering Procedure for the Award of Contracts in the Public Service, (popularly known as Due Process), the National Youth Development Programme and the Amendment to the Petroleum Technology Development Fund Act. In 2007 – 2011 he served as the Chairman of the South-South Parliamentary Caucus and is presently the Chairman, House Committee on Public Service Matters.

In the course of his tenure as a Member of House of Representatives, Uchendu attracted a number of Federal and State Projects, namely;

Primary Schools at Mgbueto in Emohua, Ipo and Omademe in Ikwerre LGA

Distribution of Secondary School furniture and books for Emohua and Ubima.

Influenced the Construction of the East/West-Elibrada-Oduoha-East/West Road.

Skill acquisition for over 30 Youths

Financial support to 300 indigent Citizens of my Constituency.

In addition, he has facilitated the employment of over 15 Constituents into the Federal Public Service and Parastatals.

During the period, Rt. Hon. Andrew Uchendu was in the service of Risonpalm Ltd, he obtained the Masters of Business Administration (MBA) in Management from the University of Port Harcourt in 1987. And in the course of his years in the House of Representatives, he attended a number of Leadership Development Programs at the Universities of Florida, Oxford and Harvard in the United States of America.

As a grass roots Politician, Uchendu is always in touch with his people. He is an active member of his Age Group, Ikwerre Development Association (IDA) and Ogbakor Ikwerre Cultural Organization. As a result of his services to the Community, he was conferred with the Chieftaincy Title of Ochi Aliri II of Emohua and only recently, he was initiated into (Ohna), the highest Traditional Council in Emohua Kingdom.

It is in consideration of all these that Rt. (Hon.) Andrew Uchendu was conferred with yet another Honour in 2008, the Officer of the Order of the Niger (OON).

He is married with five children. Rt. Hon. Andrew Uchendu is a man of the people, if he is in the Senate, you are there. Please give him your vote.

Hon. Andrew Uchendu is not only an embodiment of selfless services to humanity but also a promoter of empowerment for anybody that comes across him. There is no stopping this epitome of leadership on his march to the upper chamber of parliament, the Senate.

Eze Chukwuemeka Eze is a Media Consultant based in Port Harcourt