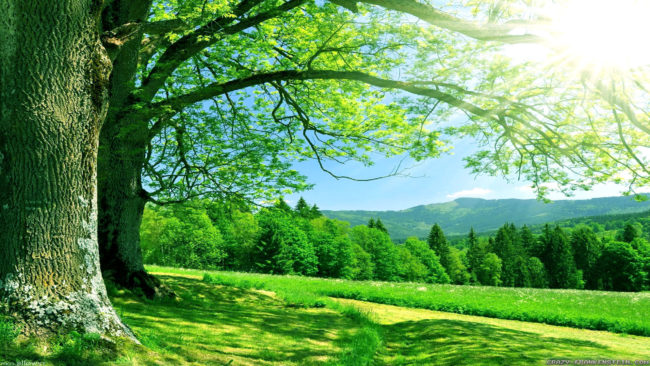 If you were asked to guess the number of all trees in the world, what would your answer be? 10 million? 250 million? 250 billion? No, none of them is the answer. According to the latest researches, there are a total of 3.1 trillion trees in our world. This is quite a big number… In fact, you have to add 11 zeros next to the number of 3.1 to get this number.

And now think about the number of leaves on all these trees. An enormous number comes up. The leaves in all these trees are working ceaselessly to maintain the oxygen – carbon dioxide balance in the atmosphere. To give you an example of how sensitive this balance is:

If there were more oxygen in the atmosphere than its current level, burning reactions would occur faster, and rocks and metals would be eroded much more quickly. Therefore, the earth would erode away rapidly, posing a major threat for life.

If we had a little less oxygen, breathing would become difficult, less ozone gas would be produced. Changes in the amount of ozone would also prove lethal for all life. Less ozone would cause the ultraviolet rays of the sun to hit the Earth more severely, effectively destroying all living things.

If there were less carbon dioxide, the amount of plants on the land and in the sea would be reduced, so fewer nutrients would be produced for animals. And there would be less bicarbonate in the oceans, resulting in increased acidity.

The increase of carbon dioxide in the atmosphere would accelerate the corrosion of the continents, leading to a harmful alkali environment in the oceans. On the other hand, as the greenhouse effect increases, the surface heat of the Earth would rise and life would perish.

NASA published a video that revealed this magnificent process that trees carry out.  The ratio of carbon dioxide, shown in red and orange in the video, is very high in the winter months, while it becomes very low in the summer.

Carbon dioxide is at its highest levels in the winter

Carbon dioxide is at its lowest levels in the summer

According to a research featured in the Nature journal, the trees, the numbers of which exceeds the stars in the Milky Way, cleans the air by starting to photosynthesize through their trillions of leaves. So how does this wonderful process take place?

All these happen with the help of small, lung-like structures called stoma. The stoma, which means ‘mouth’ in Greek, opens like a mouth to absorb air. The leaf contains so many of these small respiratory tubes that there are hundreds to thousands of stomata in just 1 millimeter square of the leaf.

Now let’s reimagine: 3.1 trillion trees, trillion times a trillion number of leaves on all these trees, and quadrillions of stomata on these leaves… Placed within a small leaf, these structures, the number of which we cannot even begin to imagine, cleans the air just like a filter, allowing us to keep breathing comfortably.

Every innovation we discover through science leads us to contemplate on the magnificent systems established on Earth.

As God informs us in the verse, “Does He Who created not then know?” (Surat al-Mulk, 14), God knows all that He has created in the universe down to the finest detail, and He pervades all living things. For God created each of them with all of their details. He also determined precisely the number of all the things he created, organic or inorganic. Certainly, man will never posses or be capable of such superb knowledge, and it only pertains to God, the Lord of the Heavens and the Earth.

It would be a process that would take days for us, feeble humans, to try to determine the number of leaves even on a single tree. Whereas our Almighty Lord knows the number of the leaves of all the trees in the world, and the number of the stomata, chloroplasts, thin veins and all other countless details in those leaves that we cannot even guess. God does not only have a command of their numbers, but also all their functions. These miraculous details, which are far beyond our comprehension, are the manifest proof of the existence of God Almighty, Who created them.

No matter which system we examine in the world, we see that everything is created in due measure for life to exist. And for all the beauty and blessings God bestowed upon us, what we should do is to be constantly thankful of the Almighty Lord. God informs us of this fact in the verses of the Qur’an as follows:

He has given you everything you have asked Him for. If you tried to number God’s blessings, you could never count them. Man is indeed wrongdoing, ungrateful. (Surah Abraham, 34)

God shows favor to mankind but most of them are not thankful. (Surat an-Naml, 73)