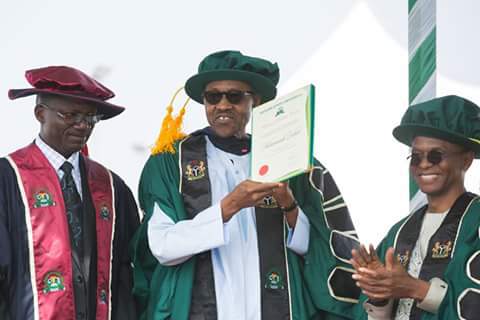 President ‘Dr.’ Muhammadu Buhari’s certificate has been described as a show of shame  and capable of bringing ridicule to the Nigerian Educational sector and certificate recognition globally.

According to facts stated by the President of the National Association of Nigerian Students (NANS) in a press statement, the association noted that the Kaduna State University is unaccredited by the apex NUC for the purpose;  “KASU is not among the 22 universities accredited by NUC to award honorary degree”, and that the school has never graduated a doctorate degree holder “KASU was established 10 years ago, and has never graduated a PhD student” while harping on the illegality of the award stating that “Section 2.0 subsection (a) of the Council of VCs Keffi declaration 2012, prohibits the award of honorary degrees to persons holding political offices.”

“It is quite unfortunate that at a time we are clamoring for a overhaul and repositioning of our educational sector, our leaders are doing the opposite by their actions and inactions.” 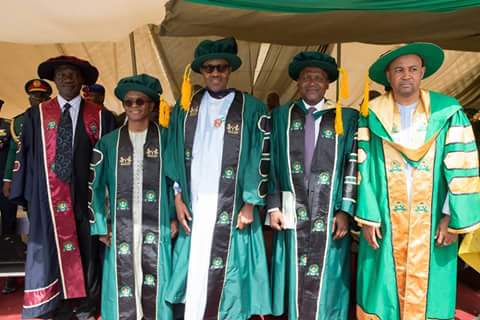 They also pointed out President Muhammadu Buhari who is yet to clear the air on his certificate saga, still went ahead to accept a fraudulent honorary degree from a university that is not authorized by National Universities Commission (NUC) to do so.

NANS declared the honorary doctorate degree conferred on President Buhari as illegal and non sequitur and called for the President to relinquish the fraudulent degree. NANS also called the NUC to sanction Kaduna State University while demanding that President Buhari faces his primary responsibility which is to “focus on governance because, our country is faced with terrorism, economic hardship, religious crises and political tension.”

It is quite unfortunate that at a time we are clamouring for a overhaul and repositioning of our educational sector, our leaders are doing the opposite by their actions and inactions.

The show of shame that took place in Kaduna State University (KASU) on 12 December, 2015, is capable of making foreign Universities and corporate organizations to further undermine and disregard degrees obtained from Nigerian schools.

We expect our leaders to be our role models by living exemplary life. How can one explain that, President Muhammadu Buhari who has not even cleared the air on his certificate saga, still went ahead to accept a fraudulent honorary degree from a university that is not authorized by National Universities Commission (NUC) to do so.

We make bold to state that, the honorary doctorate degree conferred on President Buhari is illegal and non sequitur because.

1) KASU is not among the 22 universities accredited by NUC to award honorary degree.

2) KASU was established 10 years ago, and has never graduated a PhD student.

3) Section 2.0 subsection (a) of the Council of VCs Keffi declaration 2012, prohibits the award of honorary degrees to persons holding political offices.

We therefore demand the following:

1) That President Muhammadu Buhari should honourably relinquish the fraudulent degree.

2) That NUC should with immediate effect sanction KASU for contravening its rules and regulations.

4) That President Buhari should desist from procuring fraudulent degrees and focus on governance because, our country is faced with terrorism, economic hardship, religious crises and political tension.

The president’s action is shocking for three reasons. First, his receiving an honorary doctorate degree, from any Nigerian University, while holding and elected public office is immoral, illegal and a crass violation of the existing regulation guiding the award of honoris causa in Nigeria’s University System. Section 2.0 subsection (a) of the famous Keffi Declaration which was enacted on the 24th September, 2012 by the Association of Vice Chancellors of Nigerian Universities (AVCNU) stated that:

“AVCNU member-universities hereby make it a policy not to honour with honorary degree anybody holding political office (elected or appointed) while such officers are still in service.”President Buhari violated this rule and the president is an honourable man, apology to Shakespeare in his histo-drama book, Julius Caeser.

In 2012, worried by the spate of irregularities and the erosion of academic culture and university tradition especially in the indiscriminate award of honorary degrees in the university system, the vice chancellors of Nigeria’s federal, state and private universities met at the Nasarawa State University, Keffi and resolved, collectively, that the age-long best practices of university culture be restored and maintained. It was the case that politicians, public office holders and all manner of money-bags and favour-flaunters will be conniving with governing councils, vice chancellors or visitors to state universities all in the bid to cajole or hoodwink the university into awarding an undeserving honorary degree. It was so rampant that the credibility of any honoris causa by any Nigerian university was suspect. The Nigeria’s academic community was relieved when the Keffi Declaration on “Sustaining Academic Tradition in Nigerian Universities, Including Guidelines for the Award of Honorary Degrees” was made. It was even more refreshing seeing that all the federal universities, all the state universities and all the private universities at that time have signed the declaration.

But the action of President Buhari of accepting honoris causa, in complete violation of the Keffi Declaration, has done one of the greatest damages to the university system since the enactment of the declaration in 2012. The president has just killed the Keffi Declaration and therefore open the floodgate of irregularities and moral corruption in the award of honorary degrees. Will the president refuse to accept another honoris causas from other universities? No. All the remaining 140 universities will now line up with their ceremonial academic robes ready to decorate the president with honorary degrees. It will be a moral dilemma for the president to refuse to accept after receiving one from a sister-university. And not only that, the president cannot stop his cabinet members, other public officer holders, and including civil servants from haggling-and-bargaining to ‘buy’ honorary degrees and even stand on the same podium with the president to be decorated. The era of immoral impunity in the award of honoris causa has effectively returned. And it was declared open by the action of Mr President.

Second, and even more disturbing is the fact that Kaduna State University is not competent to award honorary doctorate degree to anybody. Information available on the National Universities Commission website indicates that there are only 22 out of 40 state universities with approval to run masters and PhD programs. KASU is not one them. How can you have an honorary doctorate graduands when you don’t have the regular program with regular students pursuing doctorate studies? More so, the Keffi Declaration, section 2.0 subsection (e) stated explicitly that:

“A university shall not award honorary degrees if it has not graduated any PhD or has no postgraduate school or program”Because the president is an honourable man, I dare say that his idea of change is about changing the rule, it will be safe to say that he received a 419 degree that is not recognised by the NUC, a government institution under his watch.

The question is how many people graduated with PhDs at the 12th December convocation when President Buhari was decorated by KASU? Have KASU ever graduate a PhD since its establishment? When did they get the approval from the NUC to commence the PhD program? How could KASU award what it does not have? Why should NUC keep mute at this illegality and gross abuse of regulation? If the information they published in their website is correct, why should they allow KASU to award illegal honorary degree even to the resident of the Federation? It is amazing how politicians are always at the forefront of rubbishing our academic traditions and values.

It is very clear that the Visitor to KASU who is the Governor of Kaduna State is at the forefront of this manipulative scheme to rubbish the university system and smear the good name of the president of the country. Or why did he dissolved the governing council of the university simply because they allegedly drew his attention to the illegality and immorality of awarding honoris causa to a serving elected public officer? And the VC who was appointed by Governor Yakowa was rattled to his nerves with an array of queries to get him to accept political interference in the running of the university. How else, given the fact that section 2.0 subsection (c) of the Keffi Declaration states, in parts, that:

“…the award of honorary degree shall not be tied to wealth consideration or political alignment…”Who will doubt that after sacking the governing council and sufficiently intimidating the vice chancellor of the university, the APC governor as the visitor to the university, is not bullying his way into forcing the university to award illegal degrees to an APC President and a business mogul exclusively for political and material reasons?

My third reason is even more scary. Is the Minister of Education so incompetent as not to draw the attention of the President to all these violations? Why wouldn’t  the minister of education draw the attention of the president to the Keffi Declaration? And to the NUC guidelines on approved universities with graduate courses? Or better still shouldn’t the honourable minister make the moral common sense argument of not accepting a gift from an institution under ones superintendence? Or is it the case that the president, who ruled the country for over three months without ministers, is still living with that hang-over and is taking decisions without consulting the relevant ministers? If the minister of education is kept in the dark on the KASU honoris causa brouhaha, then our country is in trouble. It means the president will be relying on informal and unofficial (most of the time, misleading) suggestions to run the country. If the minister is in the picture and his opinion sought by the president and he misled the president into going to accept and illegal honorary degree, then some punitive action must be meted on the minister. If on the other hand, the minister was consulted and he advised the president against accepting the illegal degree and his advice was jettisoned by the president, then something is fundamental wrong – it means there is a crisis of confidence between the president and his ministers. And the earlier that crisis is resolved the better for our country.

It is important to note that PDP, in spite of its numerous ills had adhered to the Keffi Declaration. Former president Goodluck Jonathan, to his credit – (oh God, remembering PDP and Jonathan again) withstood all the pressures and declined many of such offers.

For me, President Muhammadu Buhari can still save the Keffi Declaration, save himself from further embarrassment and save the university system in this regard by doing two things: one, cause his handlers to issue a public statement returning the illegal and undeserved honorary degree back to the awarding university and stating his commitment to respect and protect the Keffi declaration; two, investigate and punish any persons that have hands in misleading him into this embarrassing misstep. Fighting corruption is not just about stolen wealth. It is about respect for regulations. It is about staying on the moral high-grounds. Over to you “Sai Mai Gaskiya.”  Dr. Mohammed Jibo ImranSanta Clara CountyCity of San Jose, CA