I feel real pain within and very depressed, not just because of excesses of these terrorists marauding as cattle rearers but the fact that I and AJ shared same political ideologies and believed in the PMB change mantra.

My biggest worry is PMB`s nonchalant and lackadaisical position on the menace of these dreaded terrorist group, I will not want to ascribe his silence on this scourge to his sympathy for for this felons on ethnic affiliations , then there is serious cause for worry if I and AJ have been hoodwinked? 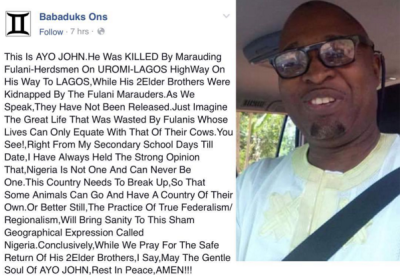 The family and friends of a young Nigerian who was allegedly murdered by marauding Fulani herdsmen along the Uromi-Lagos Expressway, are yet to come to terms with the killing of the young man who, according to friends, was a pillar on whom his family had strong support.

According to a Twitter user with the handle Babaduks Ons, the man, Ayo John, was on his way to Lagos from Edo State with his two older brothers when the herdsmen struck and after their acts of terror, John was murdered in cold blood while his brothers were kidnapped and are yet to be seen after many days.