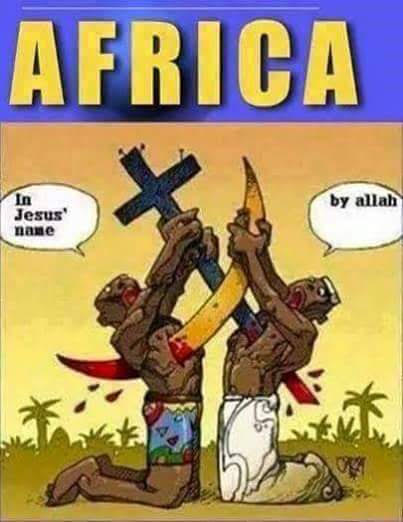 NewsRescue
“O Malik, know that people are either your brother in faith or your equal in humanity.” -Imam Ali (as)
The above quotation is an excerpt from that famous historical documents that Imam Ali (as) wrote to his famous General, Malik al-Ashtar, when he appointed him the Governor of Egypt. In Islam, the Darwin theory of evolution have no place. Like all Monotheistic religions of Christianity and Judaism, Muslims believed that all humanity descended from Adam and Eve. The implication of this is that there is a brother relationship among all humans since their genealogical chain will meet at a certain point.
But unfortunately people are not taught this commonality, people are taught and brainwashed that they are only Muslims and Christians, and that to be a “good” Muslim one must hate Christians and to be a “good” Christians one must hate Muslims. For the sake of religious harmony and peaceful coexistence, it is important to find the root cause of this problems and proper solutions to them.
Islam and Christianity are the two dominant religions on the African continent though the African traditional religions exist but they are dying out due to the preponderance of these two. Unfortunately in some countries the relationship between adherents of these two religions call for concern. In Central African Republic (CAR), there is almost a full blown war between Christians and Muslims. Muslims and Christians are at each other throat, killing each other for the only reason that you are a Christian and I am a Muslim.
And in the former united Sudan, the Americans and Israelis used that faultline of religion to divide that country into Muslim-dominated North and South Sudan. Today South Sudan is an independent country with most citizens followers of Christianity and African religions.
In Nigeria there are intermittent inter-religious conflicts between Muslims and Christians mostly in Northern Nigeria that had resulted in the loss of valuable lives on both sides. Innocent people were killed, homes destroyed,  women raped and valuable properties destroyed.
It is important to note that the New World Order that comprises Western imperialism and Global Zionism is behind all the inter-religious hate and killings on the African continent. And they do all these to facilitate their plunder and control of the rich African resources. The NWO thrives on the doctrine of “Divide & Conquer”, as the easiest way to defeat an enemy is to divide the ranks of that enemy. What the NWO fear most is unity of the oppressed because unity brings strength to the oppressed.
And the New World Order have two regimes created by the British Empire to further it’s imperialist and colonialist agenda. Those two regimes are the Saudi and the Israeli regimes. These two regimes are the wings of the NWO to further their imperialist agenda around the world. For African Muslims the NWO uses the Wahhabism of the Saudi regime while for African Christians the NWO uses the Zionism of the Israeli regime.
It is a fact of history that Nigeria started experiencing inter-religious conflicts only with the advent of Saudi-funded Wahhabism in Northern Nigeria. That poisonous ideology promotes extremism, intolerance and terrorism. The main reason why the Muslim and Christian communities of South-Western Nigeria live peacefully with each other today is that Wahhabism do not have any foothold in Southern Nigeria. Today Wahhabism have infiltrated and contaminated Sunni Islam in Northern Nigeria and other parts of the Islamic world and that is why hate and terrorism is now threatening the existence of some Muslim countries. Wahhabism is the ideology that inspired ISIS, AlQaeda, BokoHaram and all murderous terrorist groups that are killing innocent people in the name of Islam.
Most African Christians think Israelis are “super-Christians” that they are the “Chosen people of God”, and that supporting the Israeli regime despite all its heinous crimes and atrocities is a religious obligation. Due to ignorance these African Christians did not know that Israelis are not even Christians and do not believe in Jesus (as). In fact there is no place in the world where Jesus is mocked and ridiculed like in Israel. Israelis considered Jesus a “bastard” and his pure mother Mary (as) a “prostitute”. But the clever Israelis exploit this ignorance of African Christians to promote the agenda of NWO of division and Islamophobia among African Christians.
Finally, To challenge and defeat this evil agenda of the New World Order to always divide the oppressed by exploiting fault lines, practical steps should be taken by both Muslim and Christian leaders to enhance religious harmony, mutual respect and peaceful coexistence. It is inline with this that the Islamic Movement of Nigeria under the leadership of Sheikh Ibrahim Zakzaky have made it a point of duty to invite Christian leaders to its programs and to attend Christian programs when invited. Such moves will promote trust and mutual understanding among Muslims and Christians.
#FreeZakzaky
#GodProtectZakzaky
Harun Elbinawi
elbinawi.wordpress.com
[email protected]