Just Rescued! (NewsRescue) Now popularly referred to in Iran as- ‘The Gucci bag revolution‘, this article by the Boston Globe in 2006 gives a full and detailed report on a plan and program that very well brought on the current series of turbulent events in Iran. Story also in- NYTimes; CBSNews; CFR.org 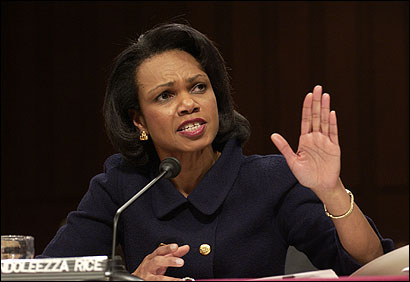 WASHINGTON — Secretary of State Condoleezza Rice asked Congress yesterday to fund a sweeping initiative to promote democracy inside Iran that would expand satellite broadcasts to enable Washington to ”engage” directly with the Iranian people. The initiative also would lift US restrictions to allow US funding for Iranian trade unions, political dissidents, and nongovernmental organizations.

The new request, which was made yesterday at a Senate Foreign Relations Committee hearing on Bush’s foreign affairs budget, would increase spending on democracy programs for Iran this year from $10 million to $85 million.

Rice announced the initiative as Washington steps up pressure on the hard-line regime in Tehran over its nuclear program, which Washington suspects is geared toward producing a nuclear weapon.

Violent protests by Mousavi youth the day after elections {Aljazeera}

”We find it in our interest now . . . to see if we can’t engage the Iranian population,” Rice told the senators. ”In some ways, you could argue that they need it even more now because they are being isolated by their own regime.”

Senators did not respond to the request, but both Republicans and Democrats peppered Rice with tough questions about the administration’s policy of supporting democracy at a time when Islamic hardliners have won elections across the Middle East.

The initiative could be a boon to a New Haven human rights group, the Iran Human Rights Documentation Center, which last year received about one-third of the $3.5 million that the State Department spent on promoting democracy in Iran.

Yesterday, a senior State Department official briefing the press on the new effort acknowledged that it will be dangerous for Iranian groups to accept funding from the United States and that activists could be killed or imprisoned for doing so.

The official said the lion’s share of the democracy money would therefore go to groups outside Iran that maintain discreet contacts inside the country, but that the State Department was prepared to have direct contact and funding links with eligible groups inside Iran. She said much of the work would go on in secret to protect the identities of Iranian activists.

”We don’t have blinders on,” she said. ”We don’t want to hurt the people we are trying to help.”

State Department officials at yesterday’s briefing stopped short of calling for regime change in Iran, but talked of a desire to foment internal drives for massive political change, similar to movements in Ukraine and the former Soviet republic of Georgia, where US funds paid for media and civil society outreach. But they said they would not support opposition groups, a limitation that would disqualify many Iranian exile organizations.

Women praised as the face of these deadly riots, were the repulsed face of the cartoon riots not long ago

Ramesh Setehrrad, president of the National Committee of Women for a Democratic Iran, an advocacy group in Washington, said the administration would have a hard time finding organizations to fund if it rejected the political opposition in exile, most of which is associated with the Mujaheddeen Khalq, which the State Department considers a terrorist organization, or with monarchists associated with the late shah, Mohammed Reza Pahlavi.

”There is nothing left as far as the opposition is concerned,” Setehrrad said. She called the move a ”step in the right direction,” but said it would be inadequate until Washington decided to openly support the political opposition. Rice’s initiative by itself ”will not bring the regime down and will not weaken the regime’s grip on power,” she said.

Rice’s initiative also met skepticism from regional specialists who said that the US democracy initiative could cause some in Iran to feel the United States is meddling in its internal affairs, and inflame nationalist feelings that are already bolstering popular support for Tehran’s nuclear program.

Rice’s package for democracy would provide an extra$50 million to broadcast programming into Iran in the hopes that a significant number of Iranians will be able to get it via satellite dishes, which are common despite being banned.

Some of the money would go to expand the Persian-language service of Radio Farda, a joint venture between Voice of America, Radio Free Europe, and Radio Liberty, which now runs only four hours per day.

State Department officials have traveled to Los Angeles, home to a large Iranian community and nearly two dozen Persian-language television stations, to vet other groups that could broadcast in Persian, officials said yesterday.

Riot arrests are not unusual- (USA) Reverend Al Sharpton, murdered Sean Bell’s fiancee and about 200 others arrested in New York during a protest of the ‘not guilty’ verdict of police that killed Bell in cold blood. {image: MahoganyGirl}

An additional $15 million in funds would go to US organizations that would support Iranian labor unions and civic activities, and to fund Iranian groups.

The money represents a significant jump from last year, when the State Department set aside only $3.5 million for democracy promotion in Iran, a small portion of the $48 million that the administration earmarked for its democracy fund. Of that, $1 million went to support the Iran Human Rights Documentation Center.

That center was formed to help create a historical record of human rights abuses in Iran since the 1979 revolution. The group’s board of directors includes Owen Fiss, a Yale University professor, and Reza Afshari, a history professor at Pace University in New York.

The new proposal for Iran is far more ambitious, but its impact may be unclear.

Alireza Morovati, CEO of KRSI, a Persian-language radio station, said it is impossible to know how many listeners he has in Iran. 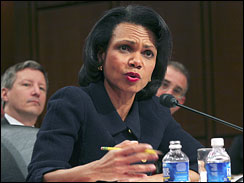 regime. He said his station has never received, and has never asked for, US funding in its 17 years of existence.

Yesterday, both Republican and Democratic senators alike grilled Rice on the administration’s track record of promoting democracy in the Middle East, after the election of Islamic extremists in Egypt, Iran, and the Palestinian territories.

Barbara Boxer, a Democrat from California, had a testy exchange with Rice in which she asked:

”Do you agree that nations throughout the world are electing more negative candidates who run against America?”

Report on US propaganda broadcasts into Iran

Ingredients for stirring up an uprising:

…and you get an uprising any day.

US police with batons run after peaceful housing demonstrators in Boca, 2008. Several were injured. {Img: TimeInc}

FreeRepublic: BOCA RATON — A crowd of more than 500 people waiting for hours this morning for housing voucher applications were dispersed by police in riot gear at the Boca Raton Housing Authority when the applications ran out sooner than expected.

The action prompted complaints that officers used excessive tactics and housing authority officials were incompetent in their planning.

Two people were arrested and six to eight people hospitalized for exhaustion during the ordeal.

Hundreds of people, mostly mothers who had spent more than eight hours in line, were forced to leave the property at 2333 W. Glades Road by 30 Boca Raton Police officers, including SWAT team members, who walked toward the crowd in unison holding their police shields up about 10:30 a.m.

“Leave or face arrest,” police officers shouted at the crowd as they urged them out of the housing authority parking lot. People were made to leave the vicinity altogether, with officers forcing them to cross the street and move toward their cars.

Riots in Iran; terrorist bomb blast at most holy mausoleum

‘Thousands from Israel twittering as Iranians’