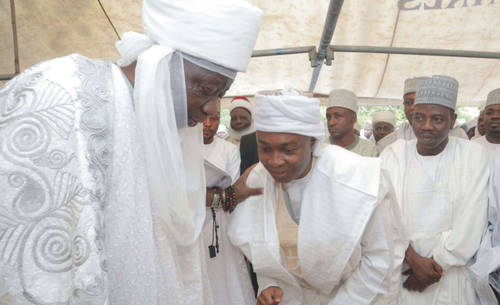 Increasingly, the Emir of Ilorin, Alhaji Ibrahim Sulu-Gambari, is becoming a tool in the hands of the Senate President, Dr. Bukola Saraki, SaharaReporters sources in Kwara State say.

A recent victim of the onslaught is Alhaji Ibrahim Oniye, Makaman Ilorin, who was suspended by Governor Ahmed as Chairman of Kwara State Parent-Teachers Association.

The suspension of Oniye, who was also barred by the Emir from stepping into his palace, did not come as a shock to many people in the state.

The man, although blind, is a reputed straight talker, who is not afraid to speak the truth to those in authority.  His fearless nature was said to be one of the attributes that endeared him to the late Emir Aliyu Abdulkadir, the 10th Emir of Ilorin, who appointed him the first Makaman of the Ilorin Emirate in 1993.

Our sources say what got Oniye into trouble was his decision to tell Alhaji Sulu-Gambari that more people in Kwara are angry with Saraki and are actually cursing him.  Oniye was said to have told the Emir that those cursing Saraki are mainly the poor, who see the Senate President as one who has taken what belongs to them and continues to do so through Governor Ahmed, who is seen as a stooge.

Alhaji Oniye was said to have made this observation known to the Emir at a meeting called by the latter to find out why huge financial outlays on prayers by Saraki failed to stop the Supreme Court from halting the Code of Conduct Tribunal (CCT) from going ahead with the Senate President’s prosecution.

In attendance at the meeting were prominent Muslim clerics and Ilorin title holders, who preferred to deodorize the real situation until Oniye spoke and told the meeting about the anger of Kwarans with Saraki.

The treatment of Oniye by the palace and the governor has sparked disquiet in the state and invited scrutiny of the Emir.

SaharaReporters sources said that as word leaked that Alhaji Oniye had been suspended and that his PTA chairmanship would be taken away, the political establishment in Ilorin reversed the decision. By the time SaharaReporters reached Alhaji Oniye, it was apparent he had ready-made answers.  Carefully picking his words, he denied he had not been suspended and blamed the news on those that might be jealous of his many titles and prestigious position within the Ilorin Emirate.

He also said he was never removed as the PTA chairman at the state level.  He stressed that as he had never been “queried or indicted” for any malfeasance, he couldn’t have been removed.

Asked if he had spoken up for teachers whose salaries had remained unpaid in the state, he waxed philosophical saying he is the “father of all” and then asked rhetorically if there are no unpaid teachers in Osun, Bauchi, Kano and other places.

When SaharaReporters pressed Alhaji Oniye regarding the Saraki trial in Abuja, he gave interesting answers.  First, he said it was his duty not to allow the image of Ilorin to be dragged in the mud by the trial since Saraki was Ilorin’s son, and later, that he would advise people not to jubilate over Saraki’s predicament unless he is pronounced guilty by the tribunal. When our reporter read this portion of his statement to him he asked that it be taken out completely saying he had no comment on Saraki because he doesn’t want to be dragged into politics.

SaharaReporters then asked Alhaji Oniye about the reason he worshipped at a local Mosque last Friday as opposed to the Central Mosque where he has always worshipped. On this question he was slightly upset, saying it was stupid of anyone to read meaning into that, claiming that since the Emir went to Ira for the anniversary of the Oba of Ira without taking him along, he was not under any obligation to worship at the Central Mosque.

The Emir is currently viewed as simply carrying out the wishes of Saraki and nothing else. Sources in Ilorin said issues in the emirate hardly get the Emir’s attention unless they have the potential to enhance Saraki’s fortunes.

Also sucked into the Saraki scheme is the Ilorin Emirate Descendants Progressive Union (IEDPU) led by Alhaji Abdulhameed Adi. The IEDPU showed its true character when it went to present a Qur’an and Alkayba to Saraki in the Senate shortly after his indictment.

The union, at the prompting of the Senate President, scrapped its Ilorin branch, which comprised younger, better-educated and radical members. The branch had been opposed to Saraki’s stranglehold on the affairs of the state.

Members of the branch decided to go to court, a move that was leaked to the Emir, who called them to a meeting. On arrival at the palace, the Emir informed them that the most important issue was how to ensure that Saraki does not lose the Senate Presidency. He followed that up with an order that they should return to their homes and pray for Saraki.

Those at the meeting expressed shock at how the Emir had begun conflating Ilorin well-being with Saraki’s.

The bigger shock was witnessed last week when Saraki visited Ilorin. The Emir left the palace and followed Saraki to his residence, telling those obviously surprised by his abominable conduct that he was escorting his ‘son’ home.

Currently, it is said that the Emir rarely attends meetings of Northern Emirs. He is said to be fully occupied running errands for Saraki, leaving many displeased with the way the Emir conducts himself in the community.

Many, however, link the Emir’s servile conduct to a rumored prophecy that the 11th Emir would be deposed. The current is the 11th Emir and he is said to believe that it is the Saraki family that can stop the predicted deposition.

In the meantime, sources say copious sums of money are being spent on marabouts and traditional diviners to ensure that Saraki escapes justice.

Many marabouts are said to have been sent on trips to Saudi Arabia to pray for him. Locally, some others were contracted to say special prayers on Sobi Hill in Ilorin. They were said to have been told to come down and immediately slaughter a camel. They, however, met a dead camel when they came down from the hill, which was viewed as an indication that the prayers said had no effect.

Traditional diviners are said to have been hired for Saraki by the Emir of Okuta, in Baruten Local Government Area. Saraki is said to have promised to elevate the traditional ruler to the status of a First Class Emir. Three weeks ago, three diviners were brought in from the neighboring Republic of Benin.

All these activities are being funded with state resources, which are controlled by Saraki, with Governor Ahmed said to be no more than a mannequin.  Through state resources, judicial officials, security operatives, media practitioners and politicians are being bribed.

The unsurprising consequence is that the state is unable to pay its workers or meet basic obligations.