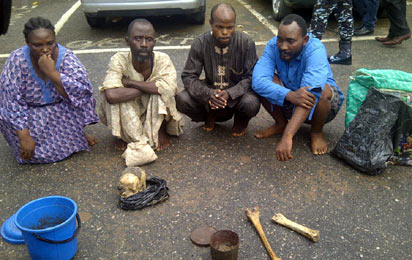 The suspect, Sukuratu Salami, who was paraded alongside a cemetery guard and two others,were arrested by operatives of the Special Anti-Robbery Squad, SARS, in Joju area of Sango Ota, with a human head, intestines, bones, kidney and other human parts.

Salami, who admitted to have been into human parts business for a year, said she started as a herbs dealer.

Greed
Narrating how she ventured into the business, the mother of three said: “A herbalist approached me last year and demanded for human parts. When he told me how much they buy the parts, I was tempted.

“I approached one Tantoloun, who works in a grave yard. He sold a skull for N10,000 and I sold it in return for N20,000. Greed made me to continue until I was arrested.

“I buy pieces of bones for N2,000, liver and intestines for N1,000 each and resell for N5,000 or more depending on the buyer’s bargaining power.

“I am not a killer. I have never killed anyone. I only request for decomposed human parts. I needed the money to feed my three children of ages 30, 27 and 23 respectively.

“Those who patronize me are herbalists and trado-medical practitioners. The parts are used to prepare concoction for sick children. So far, I have only sold 10 human skulls.”

She promised never to go back to the illicit business again if left off the hook.

On his part, the cemetery guard, Rasheed Tantoloun, from Oyo State, said he usually dig dead bodies out of their graves with the aid of one Ibrahim, whom he hired.

He alleged that his employer instructed them to exhume dead bodies that have stayed long in order to get spaces for fresh ones.

He said: “Anytime old corpses are exhumed, we usually collect the parts and sell to ready buyers who are usually agbo sellers (herbs dealers).

“My salary is N5,000 a month but since I started doing the business, I made three times more than the amount. We also dug corpses buried without caskets.”

Another suspect, Waheed Ibrahim, an Arabic teacher, said he was paid N3,000 for exhuming dead bodies.

According to him, “we usually tamper with dead bodies buried without caskets and those whose relatives never showed up after burial. My job is to exhume and dismember the bodies and at the end of which I would be paid N3,000.”

How they were arrested
The suspects reportedly met their waterloo after operatives of SARS, who got wind of their alleged dealings, posed as buyers.

The state Police Commissioner, Umar Manko, who paraded the suspects, said the command took interest in the case following the mysterious disappearance of persons.

According to him, “detectives led by the SARS commander, Abba Kyari, posed as buyers and bought a human head from Salami at N120,000.

“After arresting the suspects, Salami’s house was searched during which a human head, liver, intestines and other parts were found. We picked interest in this case because of the disappearances of people. With their arrest, we hope that we’ll get to the root of these disappearances.

“We discovered that most of these bodies are fresh. It is criminal to deal in human parts. A few weeks back, Soka Forest was discovered in Ibadan. As you can see, this crime happens all over.”