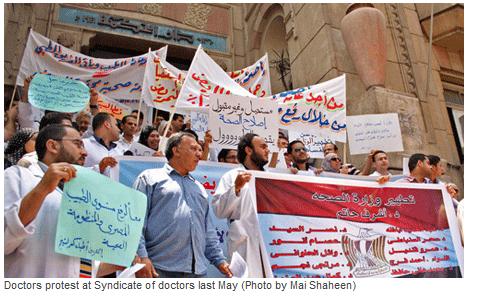 NewsRescue- Hunger! it’s all about the hunger. There is a global famine. NewsRescue has been reporting on this. It’s hitting harder and harder. And when you view the Tunisian riots, the Egyptian riots. The hunger is what’s behind it. 25% of Egyptians live below the poverty line. 20% of Egyptians suffer from hunger. This report shows that hunger itself as a disease state, leads to stunted growth and other neonatal and infant problems, that cost Egypt $3.7 billion every year.

Egyptian physicians have been on strike due to low wages. It is difficult to image that medical doctors in Egypt earn less than $100/month. It costs at least $200 to survive/month in Egypt, yet their medical professionals are paid so little. In Europe and north America, the average physician salary is $113,000 per year. Even in Africa, in a sub Saharan nation like Ghana, the medical doctors salary is about $1,500 per month.

Egypt witnessing three major protest driven government overthrows, from that of Mubarak, to the quick push for Tantawi to handover, and then the Morsi ouster. This all happened and keeps on in a population with 25% youth and hunger.

Here’s a read on the hunger in Egypt, published July 2nd:

About 17% of the population, 13.7 million people, suffer from hunger. This is an increase from 14% in 2009. These findings are from a study released by the UN World Food Programme (WFP), Egypt’s government and the International Food Policy research Institute (IFPRI).

The study also shows that infant malnutrition is escalating. When malnutrition strikes children at an early age, it causes lasting physical and mental damage. A generation can become stunted in growth and mind.

WFP Egypt Country Director GianPietro Bordignon says, “This increase in food insecurity, malnutrition and poverty rates has not happened overnight, during this year or even during the past year. People’s inability to have adequate and nutritious food is largely attributed to rising poverty rates and a succession of crises from 2005 – including the avian influenza epidemic in 2006, the food, fuel and financial crises of 2007-09 and a challenging macroeconomic context in recent years.”

The greater Cairo area alone has 3.5 million hungry people. Solutions to hunger include reforming the food subsidy system and using the savings to increase funding for nutrition interventions.

IFPRI Research Fellow Clemens Breisinger says, “Egypt will experience a triple win: fiscal savings, reaching the most vulnerable, and improved nutrition if the current subsidy system is restructured. The current system is not targeted to those who need it the most.”

William Lambers is the author of Ending World Hunger: School Lunches for Kids Around the World. His other books include The Roadmap to End Global Hunger, The Road to Peace and The Spirit of the Marshall Plan: Taking Action Against World Hunger.- ThinkAfricaPress .