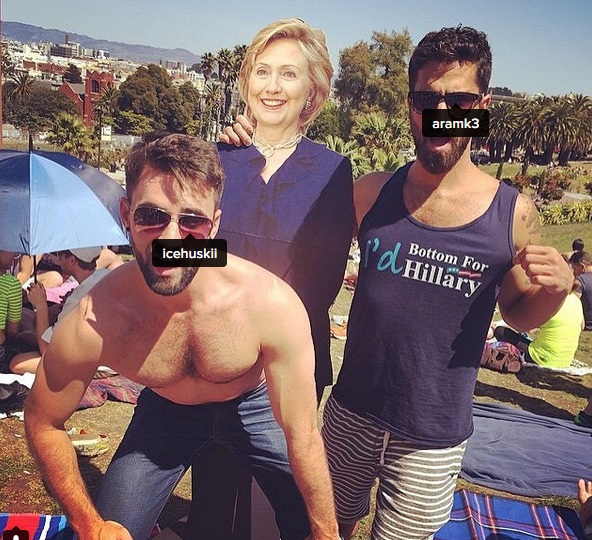 Parental Guidance Is Required For This Note

The above title is going to be the new Pastoral Nuptial pronouncements in Churches all over the United States of America; because June 24, 2015 will now go down in world history as the day the Supreme Court of the most powerful nation on Earth endorsed  and approved the ‘sodomic’ absurdity of  Gay Rights.

With that monumental Ruling, it is now Legal in every State in the US for a man to marry another man and for a woman marry another woman. Well, it is okay for the people of the United States of America. President Barak Obama believes it is a further strengthening of the Freedom, or the values and ideals America stands for. He says it will make the US more free. Hilary Clinton, the Democratic Presidential Candidate for the 2016 Elections said ‘Love has triumphed at the highest Court in the Land…’ The Republican Presidential Candidates on other hand are sharply divided on the subject matter. While some are vocal about their objection to such an abominable Law, others, who are not so excited by it, are cautious in their opinion because of the Vote capital inherent in voicing their true feeling about the Ruling. But guess what, this issue would definitely be a factor in the 2016 US Elections. It worked for Obama in the last Elections that won him his second Term. But the next Democratic Presidential candidate be lucky playing the pro-Gay card. I can see the ‘strategic majority of  normal’ human and conservative Americans saying ‘yes, we grudgingly accepted the anomaly of having our kids marrying their own sex, while we pray for God to deliver them from this despicable evil that has taken over their sanity…but making it a Law! That is a joke taken too far!

Let us call a spade by its name: what is right is right and what is wrong is wrong. What is bad is bad, while what is good is good. It is wrong for a man to be having sex with another man. It is wrong for a woman to be making Love to another woman. It is a bad for a man to tell another man ‘I want to marry you…’How will he say it? Better still how do they propose to each other I wonder. ‘Will you be my wife? (That is the man proposing to another man). Or, how does the woman propose to her fellow woman? ‘Will you be my husband or what? (the woman proposing to another woman). It is crazy! Pure madness!!. How do they have children? For those who go into these ungodly unions with children from a previous but universally acceptable straight relationships, how do they bring up their children under such absurdity?

On one of Wendy Williams Show, I watched a Gay gentleman struggled with the issue of the procreative elements in Gay Marriages. He said in his case (and I want to believe in most Gay cases), they had to pass their sperm, like a relay baton, from one female Egg Donor to the another, for one funny reason bordering on anonymity or something like that to arrive at the final surrogate mother of their Baby. His explanation was so embarrassingly clumsy, tacky and cumbersome that Wendy, trying to save her Viewers from the gory details decided to forget about asking him how the Baby would be breast-fed. Otherwise, some members of her Live Studio Audience would just throw up and they may have to pause the Tv Show to clean up the mess before resuming the broadcast.

On CNN, I watched a presiding Reverend Father marry  two women ‘I now pronounce you, wife and wife…’ It was a brief clip that stopped at that quote. But I can imagine what he would have said next ‘Wife, you may now kiss your wife…’ Can you imagine how that sounds! On one episode of the Cheaters (an American true life Reality Program that exposes unfaithful Partners in relationships), a Lesbian who discovers her partner cheating on her with another woman was so traumatized that the tragedy made her switch back to a normal man-woman relationship. Her argument : She thought having a relationship with her fellow woman would give her greater guarantee from the infidelity that is the norm in man-woman Love affairs. But she was wrong. According to her, a Cheater is a Cheater.

Anyway, that is their problem in America. But then it is also becoming our problem here in Africa and especially in Nigeria. The one good thing the 7th National Assembly achieved was knocking out the Bill endorsing that madness in our country. For most of us in Nigeria, the popular view about Gay people in Nigeria is that, except for a few cases, those who engage in it, unlike their Western counterparts, do so for pecuniary and fetish reasons. This view is particularly strong with the men most of whom are suspected to be in it for money and other demonic ritual purposes. This Gay tendency is more common among the young Ladies, most of whom certain quarters believe are in it out of frustration from the normal relationships or peer pressure. Thankfully, over 99% of the over 170 million Nigerians believe that this tendency is an abomination from the pit of hell.

I do not know which Nigerian Parent, old and young, illiterate and educated, the unexposed and the enlightened, would smile and tell their daughters ‘when are you going to take us to meet the Parent of your proposed wife?’ Or ask their sons as the case may be…’ok, so what does your proposed husband do for a Living?’ It just does not sound right or healthy in the ears and definitely does not sit well with the heart.

Well, the days of Gay Marriages are upon us and America, by that Ruling, is telling us to live with it. The next thing we may be seeing in weeks or months to come may be Foreign Donor Agencies that would flock our Land with millions of dollars funding NGOs in Nigeria to promote Gay Marriages. Before you know it, like it became fashionable (at some point to be HIV/AIDS positive), it would soon be the in-thing to be Gay. Most likely, they are going to start with some of  the gullible, but underpaid or hungry Nollywood Artistes. I do not know how Nigerians would react to a Gay movie from Nigeria and you know our people in that neck of the woods are  masters of mediocre  movies. They know how to promote sensitive  messages in unpleasant manner. By the way I watched, with great pity for the Black American community, as the Producers of Empire clumsily tried to sell the Gay card to their fellow brothers as demonstrated in the character of Jamal, the son of Luscious Lyons, the African American music mogul and billionaire. You see, I would not be surprised if the White Funders of Hollywood would insist that their Black American movies must have major pro-Gay Plots and scenes as we see in the Jamal rump with his father’s Tv Documentary Producer. They always need the Blacks to promote their games and goals because Blacks give life and spice to social stuff and turn them into pop culture. Check out Magic Johnson (HIV/AIDS), Michael Jackson (Music), Mohammed Ali (Boxing) Tiger Woods (Golf) and so forth. Anyway, this is a subject for some other time but suffice to say that the Gay issue may soon take on the same concept.

Before you know it, normal Nigerian families burdened by the harsh realities of Life would have no choice but to succumb to the temptation of giving their daughters or sons away to one powerful woman or man in the society, as the case may be-just to survive. It is as simple and dangerous as that. But I trust our Cultural Hardliners, so many of those abominable relationships would be ‘blessed with potent curses’. I am sure they would be generous with those curses as wedding gifts to the ‘misguided Couples’ trying to twist their heads and age old Customs.

Recall that when Terrorism started, we, in Nigeria, used to say ‘God forbids such madness would come to Nigeria’ Well, it came to Nigeria and how sloppy did we deal with it!. The new headache coming to face us in the nearest future is the Gay Campaign. This is a clarion call for all well meaning people in our Land to prepare ourselves. Parents should step up the monitoring of their Wards and the company they keep. Neighbors should become more aware of any such influences in their neighborhood. Watch out! Africa, as usual, would be  the Testing Ground for this abomination in time to come.

Europe is yet to come out as bold as the Americans have but I suspect some may soon begin to up the ante of this repulsive conversation. Of course, Asia would hear none of it just Middle East would behead any such man or woman that stand up for such sacrilege. Russia would be outraged to as much as get a hint of it in their Land. As a matter of fact, the Gay Right is the first in the series of  malady we will be seeing because in today’s America, there is the evolving gender trend called the Transgender i.e.  those who change their gender identity from male to female and vice versa. That is besides the weird ones marrying Animals as in dogs, cats, they call their Pets…Is it not sickening just thinking about it!

All said, I empathized with both the Affected and Infected by this madness and I believe they need our prayers. It is about the sacredness of God’s Order and the challenge of it by Man…Some mad Man. It is like a man saying he feels okay going for shopping stark naked just because he just feels it makes him free as a human being…and so we should accept him like that. In Africa, particularly Nigeria, where I come from, they tell the idiot that his sanity is gradually leaving his sense of normal logic and reasoning. Before he runs into the market place to look for it and become a full blown madman, his family will whip it out of him lest he disgraces them with his mental case. In Africa, we believe the madman does no he is mad and so he does not feel shame. It is his family that carries the disgrace and shame arising from his insanity.

My Prayer is that God should not allow some of those smart Policy Think-Tank Eggheads in the US to tie this new malady to Democracy, Free Speech and Freedom of Expression in order to equip them with the excuse to destabilize the little peace and sanity we are just beginning to enjoy in Africa especially in Nigeria under the Mohammadu Buhari Administration. I am sure the old man would have a heart attack should he discover that any of his beautiful and well-brought up children have Gay tendencies. Allah forbids!