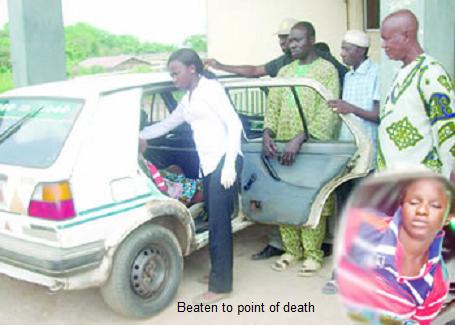 THERE was pandemonium in the early hours of Monday at the railway area of Omi-Adio community, in Ido Local Government Area of Ibadan, Oyo State, when a man known as Adeleke Adeniye, a resident of the area beat his pregnant wife to death.

Information gathered by Nigerian Tribune from the co-tenants and residents of the area revealed that Adeleke, a trained automobile mechanic but who now works as a commercial lorry driver started making trouble with his late wife, known as Mujidat Adeniye, around 10.30 p.m. on Sunday evening, but nobody could actually ascertain the cause of their disagreement.

According to a co-tenant who preferred anonymity, the voice of the couple became amplified around 11.45 p.m. on Sunday evening and that attracted the attention of every tenant and those in the neighbourhood, “but we decided to mind our businesses because we felt it was just a mere domestic crisis which they could both reconcile on their own,” he stated.

The tenants further told the Nigerian Tribune that they became apprehensive in the early hours of the following day when the crisis between the couple still persisted and became intense.

“At this juncture, we could not hold our peace and we had to intervene. On getting to the door of their apartment, it was locked and when the voice of Mujidat, the mother of two became very loud, begging for help and attention, we had to force the door open with a pestle but we met Adeleke’s wife who was four months pregnant lying helplessly on the floor,” added the anonymous tenant.

Nigerian Tribune further learnt that the husband had escaped arrest by the residents and tenants of the area and the pregnant wife was rushed to Alafia-Hospital at Apata, but the body was rejected and was later transferred to the University Teaching Hospital (UCH), Oritamefa, Ibadan.

Mujidat did not get medical attention at UCH before she gave up the ghost and the lifeless body of the mother of three had been deposited at the mortuary of the State Hospital, Adeoyo, Ring road , Ibadan, while the case had already been reported at the Apata Police Station for further investigation.

According to Nigerian Tribune’s investigations, the deceased’s father, 57-year-old Mr Rufus Tijani of Apata-Ganga Area, Ibadan claimed to have settled a quarrel for the couple only once in their over 10-years of marriage and that that was about seven years ago.

The deceased’s mother, Mrs Kudirat Tijani, who is also over 50 years of age is already aware of the incident. The deceased, a trader, grew up at Odo-Ona area of Ibadan and is her parents’ first child.

Information at Nigerian Tribune’s disposal revealed that Mr Adeniye’s mother is overseas with three of his brothers, while Tolu, his younger sister, who work in Lagos is the couple’s confidant.

After it was discovered that Mujidat had given up, family members called Adeniye on his mobile number, 08033504926, and asked him to bring N50,000 for the treatment of his wife. He was said to have told them that he was on his way.

Taking too long to arrive, a call was put through to him again and he was said to have told family members to stop deceiving him because he knew that his wife was dead.

They said he told them not to worry because he would die where his corpse would be easily located and that he had already informed members of both families.

Noise at the background was suggestive that he was at a motor park.

Mujidat’s father was of the opinion that it was Adeniye who killed his daughter and that that was why he is on the run.

He, however, told our reporter that the Ogun State indigene did not marry his daughter legally. He said they only introduced themselves to him and started living together.

In a telephone interview with the Oyo State Police Public Relations Officer, DSP Bisi Ilobanafor, she confirmed that the story is true and that the man is on the run.

The PPRO, expatiating further on the issue, said that the couple’s disagreement was said to have been caused by the fact that the wife saw a lady in her husband’s car at about 6.00 p.m. on the day in question.

She was said to have asked her husband who the lady was and the husband flared up, leading to their quarrel.

DSP Ilobanafor urged Mr Adeniye to show up and report himself to the police instead of running away.

“For how long can he run? More so that the police have started investigating the story and he has two children to cater for. He should just show up and say his own side of the story. Let him come and tell us what actually happened,” she added.