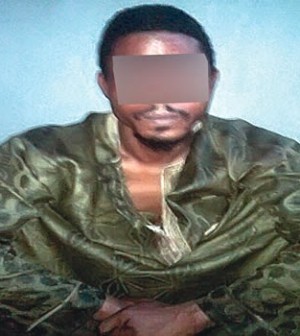 Barely one week after corpses and virtually dead victims were uncovered in a kidnappers den in Ibadan, Oyo State capital, a man described as a Muslim cleric, Isa Salaudeen, was, allegedly, caught slaughtering a woman, identified as Chiwendu Nkwocha, in his room at Ori Eru, Idikan area of the city.

But, before he slaughtered his victim, the cry of the woman reportedly attracted neighbours who came to her aid.

The suspect was said to have cut deep into the neck of the woman who was rushed to the University College Hospital (UCH), Ibadan.
Eyewitnesses narrated that it was the persistent call for help from the victim that prompted them to run to the scene.

The suspect was said to have pretended performing evil exorcism on her when he suddenly took up a knife and started cutting her neck.
The first knife the attacker used, as Sunday Vanguard gathered, was blunt and the suspect replaced it with a dagger.

But, before much harm could be done, help came the way of the woman.
An eye witness said, “People heard the lady’s shouts from inside the house and kicked the door open only to find that the “Alfa” had pinned her to the floor and was already cutting her neck. The “Alfa” ran out of the house when the first person broke in. The woman’s neck was already cut.

The head would have been totally cut off if help hadn’t come”.
A resident of the area, Taiwo Agunlofi, said angry youths in the area caught the suspect after trying to escape.

“Were it not for timely intervention, the Muslim cleric would have been lynched by angry youths,” he added.

It was further learnt that the victim was brought to Salaudeen by her boyfriend for “spiritual cleansing”. Oyo State Police Public Relations Officer, SP Olabisi Ilobanafor, confirmed the incident, saying the suspect was already in custody and had made useful statements.