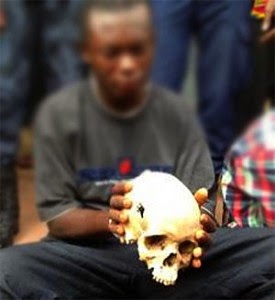 The Oyo State capital, Ibadan, has been in the news for all the wrong reasons in the last one week and the gory stories continue to unravel. First it was the discovery of a horror forest where human bodies and skeletons were discovered in a community. Few days after that discovery, a man who disguised himself as a mad man was arrested with human tongues and other body part.

The latest that is coming from the ancient city is that a man who disguised as a Pastor has been nabbed after he was discovered to be in possession of a human skull. The preacher, dressed in white garment and going about preaching at the top of his voice and receiving money from people, was arrested at Agbowo Junction.A man approached the fake Pastor to pray for him but during the prayer the man observed something inside his bag. After the prayer, the man made as if he wanted to give the Pastor some money but he immediately grab his bag and while dragging the bag, to the surprise of everyone, a human skull drop… 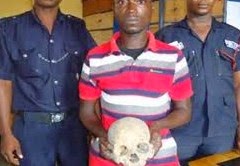 A mob, having been attracted by the shocking discovery, descended on the fake Pastor and beat him to a pulp as others who had begged the Pastor to pray for them watch with shock.
But for the intervention of policemen attached to the Kajorepo Police Division, the fake preacher would have been beaten to death and even set ablaze. He is now in police cell, answering questions about his activities.
—

The fake lunatic caught in Ibadan engaged in nasty crimes

He was caught under a bridge with 25 human tongues! 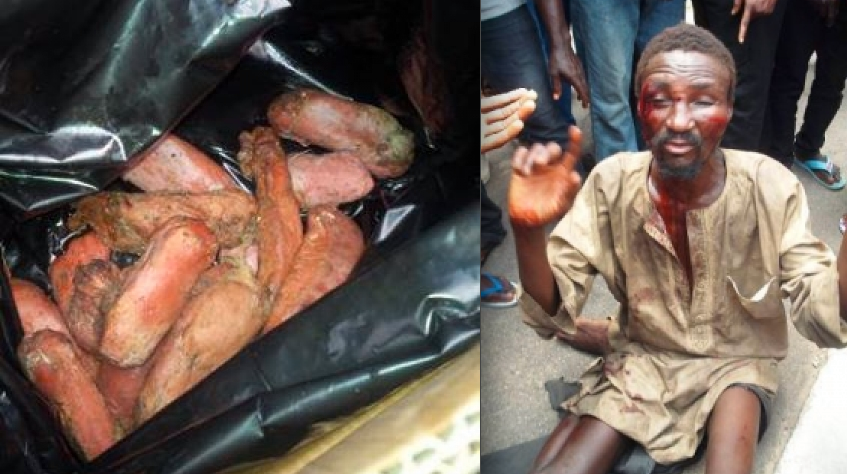 Barely three days that a kidnapper’s den was discovered in Ibadan, four tongues were found on a ritualist and a man who disguised as a madman.
Our correspondent gathered that the horrible event was discovered as everyone in state have become alerting and “self guards”.
The nabed ritualist was said to be a middle aged man.
Apart from the tongue, other items found on him were women bras, pants and bones.
see photos below: 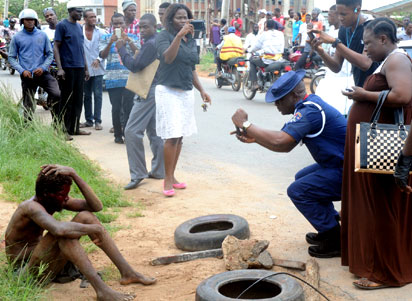 The ritualist was caught at Ring Road on Tuesday, while the people of Ibadan are yet to recover from the shocking revelation of the forest of horror where hundred of innocent citizens have lost their lives to kidnappers.
A source told our correspondent that “The nabbed ritualist who has been staying by the side of the pedestrian bridge at Oni and Son bus stop have been perpetuating the evil acts for some months now.”
An eye witness who spoke under anonymity disclosed that luck ran against the middle aged man “when some resident of the area who have been suspecting his movement discovered his notorious act and decided to deal with the support of police.
“While searching him, papers were among the items found under the bridge where he kept his loot and dangerous weapon.”
“Also various bras and pants of different sizes were found with female clothes who are believed to be his victim. Human bones and tongue were also found at the scene,” another eyewitness said.
A resident of Ibadan,  Ade Kanmbi wrote, “Operation Attack Any Mad Man, Woman” begins in Ibadan following the arrest this morning, of two suspected ritualists who feigned mental derangement. One of was caught with human tongues.”
The following image is of a disturbing nature. Viewer discretion is advised. 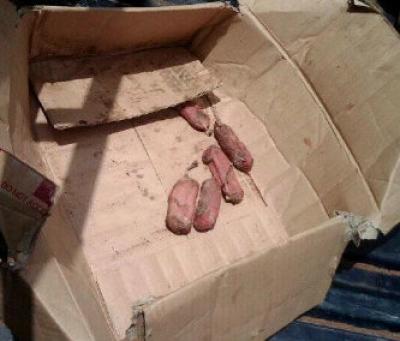