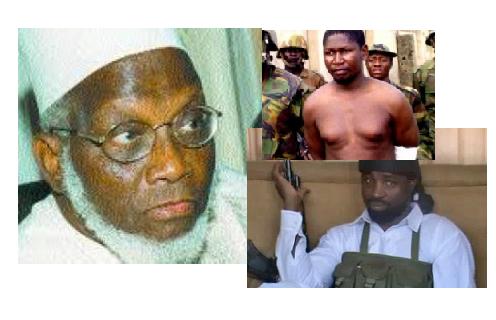 NewsRescue– The Founder and president of the Supreme Council of Shariah Law in Nigeria(SCSN), Dr. Ibrahim Datti Ahmad, in a shocking revelation, written and published by the Guardian newspaper on September 3rd, was credited with being solely responsible for the major deadly youth riots in Northern Nigeria, that have claimed the lives of hundreds of Christians and Muslims. In the publication, he can be seen as invariably responsible for Boko Haram’s emergence, a group it is reported that he has never spoken against and was chosen mediator on who’s behalf.

Boko Haram has accepted responsibility for serious carnage in North Nigeria, including the deaths of hundreds of Christians and Muslims. The group has worsened the living conditions in the north, scaring away investors and farmers, making life in North Nigeria very difficult. Recently, Buhari a former Nigerian president, begged Nigeria’s government to address and contain the terror in the North which is crippling the Northern economy and creating much hardship.

The Datti revelations, which are written with much personal detail, appearing to be an autobiography, came in response to calls by several Muslim groups, including and prominently, the “MuslimsAgainstTerror” brotherhood, for Ibrahim Datti to call off the Boko Haram cult and terror campaign, as the only Nigerian who apparently has that capacity. Datti Ahmad “stormed” out of Boko Haram negotiations with the government in March, due to what he called, government betrayal- their revealing his involvement to the public.

The man behind most Northern bloody riots

In the long article “written by” the Guardian’s editors, with support of an alleged Datti best friend and associate, the National Chairman of the Peoples Salvation Party (PSP), Dr. Junaid Mohammed, Dr. Ibrahim Ahmad Datti was touted for his being behind deadly intolerance riots in 2002 after a media publication regarding an intended beauty pageant in Nigeria.

Datti was also cheered in the publication for inspiring Northern riots in 2001 in which several hundred innocent Christians were reportedly killed. This it was written he did in response to the killing of Muslims in Nigeria’s south.

Reading the article, the doctor from University of Ibadan can be seen as proud of an ideology of which Boko Haram is an obvious off-shoot.

Related: Datti threatens war if sovereign conference is not invoked

“…Even one Dr. Datti Ahmed of the Supreme Council for Sharia in Nigeria, has on behalf of his organization threatened to unleash war if the president failed to convoke the conference. ..” 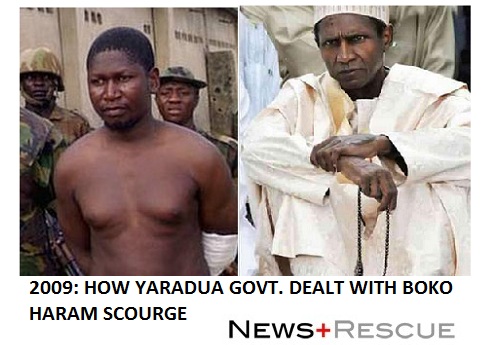 Datti Ahmad is known to have been an associate and mentor of the later Muhammad Yusuf, the founding leader of Boko Haram, who was extra-judicially killed by the Yaradua government along with over 700 of the terror cults members in a hard government hand-action in 2009.

Datti’s positions and “trophies”, according to a Muslim commentator, Malam Shehu Usman of Katsina state, are controversial, against Islam’s fundamental policies of protecting innocent life and obviously very dangerous. In his words, “According to our Holy Quran, only perpetrators of crimes should be sought for justice and not just any body, let’s say- our neighbor of another faith. Should we go after him or her due to the crimes of say… a media somewhere, or somebody in another state or country? This is haram …forbidden, a sin. We Muslims are the protectors of the innocent. The prophet of Islam anabiy Muhammad sal-alawalaihiwasalam, did not kill Jews in Medina for the actions of Jews elsewhere…they were safe in Medina. There are the proper ways of defending Islam without being transgressors. People must not continue to think and act this way, it is very scary, like thuggish way of thinking.”

Below are important excerpts from the article; we highlighted certain striking aspects:

Over the years, Ahmad has shown that he can go to any length to defend Islam. In August 2001, he said that the SCSN would seek reprisals against the killing of northerners in the South. And when in October 2001, hundreds of southern Christians were killed in Kano, by Muslim rioters, it was alleged that Ahmed inspired them. 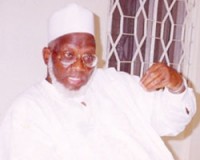 In 2002, in the wake of a Miss World pageant billed to hold in Abuja, a newspaper, in a bid to drum support for the pageant, made a comment that was deemed disrespectful to the Prophet Mohammed. Ahmad, alongside others, called on the Muslims Ummah to rise and defend the Islamic Faith.A bloody riot broke out thereafter in Kano and Kaduna; lives and properties were lost.

The medical practitioner is one that never shies away from any fight aimed at protecting his Muslim brothers, no matter the controversy.

–Still in 2003, Ahmad said: “The council (SCSN) harboured strong reservations on the safety of our population not least because of our recent experience in the Pfizer scandal, when our people were used as guinea pigs with the approval of the Federal Ministry of Health and that of all the relevant United Nation agencies.”

His claims led to the suspension of the polio campaign. Other Muslim clerics elsewhere like in India and Pakistan followed Ahmad’s lead.

It is difficult to say that Sheikh Ahmad doesn’t care for the interest of his Muslim brothers because he is dedicated to making their lives better. At the height of the debate over the necessity of Jaiz Islamic Bank in the polity, it was not necessarily the arguments of the Governor of the Central Bank of Nigeria (CBN), Malam Sanusi Lamido Sanusi, that settled matters for the bank. The matter was settled when Sheikh Ahmad threatened that Muslims were ready to go to war if anybody stood on the way of the proposed non-interest banking. Since then, the voices of the opposition to the non-interest banking have faded.

Ahmad courted controversy when in 2004 after the Nigerian “Taliban” under the leadership of Aminu Tashen-Ilimi killed policemen in their insurgency, Ahmad said of them: “These are very sophisticated youth. They are not just the trash. I can understand why they did it. I’m not in a position to say whether I support it or not, but they must have their reasons.” (Ref: http://www.zoominfo.com/#!search/profile/person?personId=136457752&targetid=profile )

To date, Ahmad still leads the Supreme Council of Sharia Law and many allege that he appears to tacitly support acts of terrorism carried out by Islamists.

The dialogue with Boko Haram has stirred the kind of controversy that has dogged Datti Ahmad’s paths.  In an interview with The Guardian, the Special Adviser to the President (Media and Publicity) Dr Reuben Abati said that even the spokespersons of the Boko Haram have admitted, that the group has mutated. “So it is not unusual that you will find a situation whereby a variant of the mutation may express a view that sounds like it’s contradicting the other,” he added.

This observation prevailed as some members of the group denied any dialogue with government through Ahmad and that they even didn’t know him. Meanwhile another group, probably the leadership of the “real Boko Haram,” confirmed a dialogue with the Federal Government.

Ahmad had on behalf of the SCSN proposed to President Jonathan to work out a confidential initiative for the Federal Government to dialogue with Boko Haram. The President’s Principal Private Secretary, Ambassador Hassan Tukur was ordered to coordinate Ahmad’s group, but the latter soon claimed that Tukur sabotaged the confidentiality of the process. The Ambassador denied the allegation.

Soon after, the Sheikh, unhappy with government officials, who failed to keep their own part of the bargain, stormed out of the deal.  However, Sheikh Ahmad, who is known to be a man of few words might, with the renewed effort by the Northern Governors’ Forum (NGF), still be the man to broker peace between the Federal Government and members of the Boko Haram.

In quitting the talks, Ahmad in a statement he signed, accused the government of insincerity and of leaking details of the talks to the media.

Several groups of Muslims have prevailed on Sheikh Ahmed to continue to lead the negotiation in order to end the insurgency.

A group, “Muslims Against Terror Brotherhood” in a statement stated: “Enough has been enough. Boko Haram has done nothing to further your objectives and your Sharia plan for Nigeria. Indeed Boko Haram has only painted our noble Deen in poor light.

“You founded the Supreme Council for Sharia in Nigeria with the noble aim of implementing Sharia law. This has been implemented to great degree in the Northern states. This was done without shedding of blood and taking of innocent lives, all praise due to Allah.

“The North has been reported as the best states for doing business in Nigeria, due to the peace and tranquility that existed, up until the Boko Haram menace came up and started the killings, frustrating Christians and Muslims and making the entire Northern environment into hell fire.”

Another group stated: “Dear Dr. Ahmad, we are very worried by the trend of events. You were negotiating a truce, but you walked out of it. You left the talks as you put it because of conditions, which you set. And you frustrated efforts at bringing peace and saving lives of Muslims and Christians. You complained that the talks were made public. Do you think the noble prophet in whose memory we behave as Muslims, will walk away from talks that can save life because his role is made public? What are you hiding?    You do not want the world to know that you made peace? Or is it that you do not want the world to know that you had a role in the genesis of Boko Haram?”  Read full article

The Presidency and the Conference of Nigeria Political Parties (CNPP) have in separate statements condemned the threat of war by a group of Muslim organisations led by Dr. Ibrahim Datti Ahmed. The group had on Tuesday after a meeting in Kaduna condemned the killing of Muslims in Yelwa, Plateau State and said if the Federal Government failed to convoke a Sovereign National Confe-rence, it will resort to war.

They vowed that the only thing that will avert the anarchy is for the Federal Government to convene a Sovereign National Conference immediately to enable the various nationalities decide on the fate of the nation. Ahmed told newsmen: “Call a sovereign national conference if you want to save the country, call a sovereign national conference, let’s sit round a table and let’s discuss whether we will continue living together or to separate, everybody goes his way. “If an overwhelming number of Nigerians want us to separate, we separate. But how do we want to separate? We can sit down around table or we fight a war. We will not submit to injustice, that’s why we are told to do Jihad. Jihad doesn’t mean attacking people without cause. It means don’t submit to an unjust person; fight him. If you die you go to paradise, if he dies he goes to hell. So what do you lose?” Culled: http://www.nigeriamasterweb.com/HeatInNigeria4.html