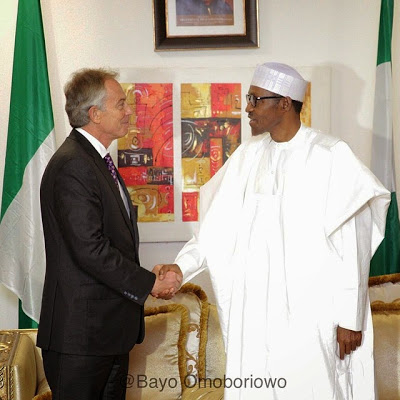 Blair also asked the leadership of the All Progressives Congress, APC, to switch from its opposition status and assume the posture of head of an organisation, stressing that the days of persuasion and agitations were over.

He further stated that Buhari and the APC must be true to their words at all times, saying the action of the incoming government within the first 100 days in office would determine the kind of goodwill it would eventually have.

Blair spoke at a two-day policy dialogue themed “Implementing Change: From Vision to Reality,” organised by the Policy, Research and Strategy Directorate of the APC Presidential Campaign Council in Abuja, yesterday.

Represented by Mr. Peter Benjamin Mandelson, a former Secretary of State for Trade and Industry in Blair’s government, the former prime minister also asked Buhari to ensure that the revenue of the Federal Government was kept in a comprehensive account.

He also warned against politics of region especially against the zones seen to have not voted for the APC.

He said: “You, Mr. Vice President-elect and Mr. President-elect, Buhari, I must say you have the expectations and the ambitions of 173 million Nigerians in your hands. You have the hopes of an entire continent as well as the eyes of the entire world focused on your efforts. But I tell you, people are excited about what is about to happen in Nigeria. They really feel a sense of expectation of faith and hope.

“What you do in the first 100 days is important and symbolic and can also have tremendously positive repercussion for the government and throughout the country. You have a limited window of opportunity to make an impact as a government. Looking at Nigeria, I would say your vulnerability is corruption and that is not new to you, particularly around the oil sector.

“People in this country seem to be able to do things with impunity and beyond the reach of the rule of law or proper accountability and the judicial system. You can crack the NNPC nut or you can make a start on it in the first 100 days and if you do so, you would have built a very strong foundation for what you have to do in the next four years and beyond.

“I think ensuring that all government revenue goes into a single government account will be a good start. Those revenues from your natural resource are so vital for the country and for your future. I think that will send a very strong message. We did the same thing when we came in in 1997 when we gave the Bank of England its independence and that gave us an instant reputation for fiscal prudence.

“This was what we called big tent politics during Tony Blair era. If Nigeria is to transform and evolve towards a politics of performance, it is very important to get away from the politics of ethnicity, religion, politics of patronage and cronyism.”