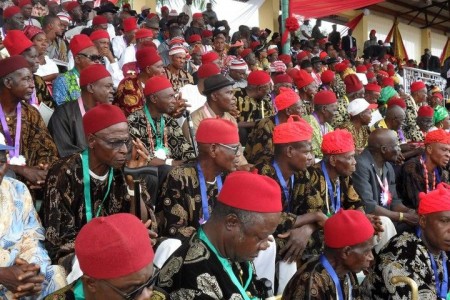 UNESCO, in 2012, predicted the extinction of the language

The participants at a symposium to commemorate Mother Tongue Day, on Friday, urged the Igbos to take pride in speaking their language to save it from extinction.

Speaking during the event organised by Umuada Igbo in Enugu, the President-General of the group, Kate Ezeofor, urged parents, teachers, care-givers and other stakeholders to communicate with their children in their native language.

“Mother Tongue Day is a day set aside by the United Nations to mark the promotion of indigenous languages in homes, schools, churches, markets, media and the society at large. In essence, it has to begin at home,” she said. “So, we, the Umuada Igbo, took it upon ourselves to create the awareness to enlighten the Igbo on the need to promote the writing and speaking of Igbo language.”

Mrs. Ezeofor said this was necessary so that the Igbo language would not go extinct as predicted by the UN Educational Scientific and Cultural Organisation, UNESCO in 2012. The organisation had said that the language may go extinct in the next 50 years.

She said that with the theme of this year’s event, Asusu Igbo Amaka, (the Igbo language is beautiful), the Igbos should see their language as their identity, which they should be proud of.

The Chairman of the occasion and a former Vice Chancellor of the University of Nigeria, Nsukka, Ginigeme Mbanefo, said the Igbos should join hands to fight against the extinction of the language.

The Zonal Director of the Federal Radio Corporation of Nigeria, FRCN, Chigozie Obialor, who was represented by Chibueze Alumona, also condemned a situation where parents and teachers punished children for speaking Igbo.

The founder of Rock Family Church, Obi Onubuogu, decried the rate at which the Igbo were relegating their language, customs and culture.

“All Igbo words, language and culture which are not fetish and do not oppress the rights and privileges of another person are supported by Christianity. People should not hide under the guise of religion to write off our language and culture. We must all join hands to ensure that Igbo language will not die,” he said.

The event which is fourth in the series was conducted in Igbo language.

Umuada Igbo is an umbrella body of Igbo daughters in the seven Igbo-speaking states.