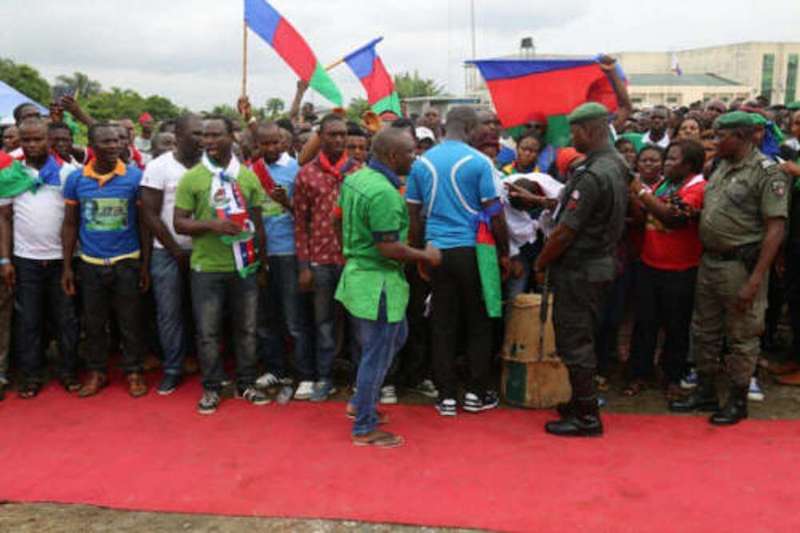 The Ijaw Youth Council (IYC) worldwide has thrown its weight behind calls for devolution of powers and the restructuring of the country, saying the current faulty federal system cannot continue to exist.

President of the IYC, Barr. Oweilaemi Pereotubo made their position known at a press conference in Yenagoa, Bayelsa State.

According to him, the IYC is no longer comfortable with the ownership and control of “our land and resources by others through the instrumentality of undemocratic Nigerian State legislations such as the Land Use Decree of 1978, the Petroleum Decrees of 1969 and 1991, the National Inland Waterways Authority Decree No. 13 of 1997, etc.”.

They therefore call on the federal government, particularly the national assembly to revisit the laws of resource ownership and the overall restructuring of the Nigeria state.

The IYC also frowned at the refusal of International O‎il Companies to relocate their headquarters to the Niger Delta despite a presidential pronouncement to that effect by the Acting President,  Prof. Yemi Osinbajo.

‎”We are pained by this. Moreso, the grounds for their refusal for relocation to the Niger delta is unclear and untenable. We want to state it categorically that irrespective of some of the few security challenges, this region is the safest in the country today. There is nowhere in the country that there are no pockets of criminal activities but unlike the forgone past, our states here are safe and very conducive for business and other activities”.

“We are once again calling on the companies to as a matter of urgency return to our area for the interest of all stakeholders. We cannot continue to pay the price of having our land suffer from oil exploration activities while other states benefit from the taxes that are due us”.

Oweilaemi while expressing the willingness of the IYC to work with security agencies to ensure that every bad egg is flushed out in the Ijaw Nation said the over militarization of the area is not the best but rather the federal government should begin the rapid industrialization of the Niger Delta.

He explained that as Ijaw people, they do not have any criminal or questionable antecedent, so they will not condone any act of brigandage‎ but  will continue to engage their members and all the youths in the area on the need to key into the new IYC vision which includes dialogue, constructive engagement and intellectual activism.

He said “We also want to call on the military authorities to sensitize and warn their operatives to stop engaging in extra-judicial killings and mindless destruction of properties in our communities. The brazen attack of defenceless people is uncalled for and must stop immediately.

“The sin of one person or a few should not be paid by a group or an entire community. We want to see a healthy civil-military relationship henceforth.

From Nembe to Ajakpa to Ogbogbagbene to Bille to Ogbe-Ijoh, we get reports of unknown gunmen attacking military formations in riverine Ijaw communities and carting away weapons and the resultant military exercises in reaction, impacts negatively on the lives of our Ijaw communities”.

On the issue of modular refineries, the IYC commended the Federal Government for its effort in siting some of it in the Niger Delta, but rejected the proposal of siting only two of such refineries in each of the Niger Delta States.

They stated that the number is grossly inadequate in achieving the government’s advertised objective of stopping Oil theft and illegal refining in the region and added that the government’s objective could only be achieved by the creation of an environment that guarantees the inclusive participation of Ijaws and Niger Deltans in the Oil Industry and ownership of Oil Blocs.

‎Also the IYC decried the deplorable condition of most of their communities as result of oil exploration activities and stressed that it is one sad issue that must be addressed.

“Our communities cannot continue to suffer deprivation and degradation for playing host to multinational companies. The companies must be mindful of their activities and show strong commitment to preserve our land while carrying out their day to day work.

“It must also be stated clearly that from the reports we have, most of the companies have not been sincere in their Corporate Social Responsibilities. Very soon we will analyse, and if need be, call for a review of all existing Global Memorandum of Understand (GMOUs) between host communities and the companies with a view to ensuring that our people are no longer short changed” he concluded.