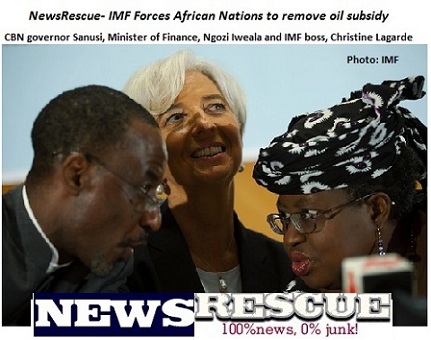 Nigeria’s Minister of Finance, Ngozi Okonjo-Iweala, has been named one of the world’s 50 greatest leaders by the American magazine, Fortune.

The magazine described Mrs. Okonjo-Iweala, as “a fearless promoter of sound economic policies” and singled her out for working hard to usher in a decade in which Nigeria’s gross domestic products trebled.
Annually, Fortune Magazine identifies men and women in various spheres of life, who, through their activities in government, business and philanthropy, have transformed lives.

In compiling the 2015 list, the magazine said it received advice from more than 24 world leaders, who adjudged the honourees from their professional domains, industries or governance as worthy of the recognition.
On the criteria required to make the roster of winners, the magazine said, “It was not enough to be brilliant, admirable or even supremely powerful”, but “to find singular leaders with vision who moved others to act as well, and who brought their followers with them on a shared quest. We looked out for effectiveness and commitment and for the courage to pioneer”.

Mrs. Okonjo-Iweala, a former Managing Director of The World Bank Group between December 2007 and August 2011, graduated from Harvard University in 1976. She holds a Ph.D in Development Economics from Massachusetts Institute of Technology.

As Nigeria’s two-time Finance Minister, Mrs. Okonjo-Iweala is credited with helping to lay the foundation for Nigeria’s economy, currently the biggest in Africa with a $510 billion GDP.

Still, the minister’s recognition came as the Nigerian economy faces one of its worst crisis in the face of sliding oil prices, with the Naira devalued by more than eight per cent after the government apparently mismanaged oil savings.

In 2012, a government fuel subsidy skyrocketed from hundreds of billion naira to N3trillion, amid extensive fraud involving officials paying billions of naira to dubious petroleum marketers who did not import or deliver petroleum products.

Three years later, no one has been punished for the theft.

Mrs. Okonjo-Iweala has also criticised for her role in the alleged missing $20 billion oil money, after she commissioned an audit firm to scrutinize government oil firm, Nigeria National Petroleum Corporation, NNPC in May 2014, but refused, alongside, the petroleum minister and Auditor General, to disclose the findings of the investigation nearly a year after.