LAGOS — Operatives of the Federal Special Anti-Robbery Squad, FSARS, Adeniji-Adele, Lagos, have arrested six suspected members of a notorious robbery gang that specialised in snatching vehicles from their owners at gunpoint in different parts of the country. 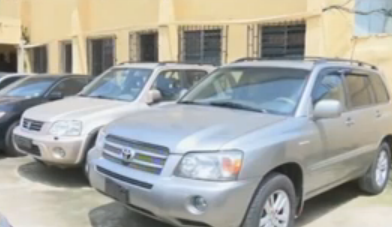 Also arrested was a chieftain of the All Progressives Congress, APC, Odeyemi Itunu, who allegedly owned one of the guns recovered from the suspects.

Recovered from the suspects were 17 stolen vehicles, including three single-barrel pistols and a cache of ammunition of different calibre.

Paraded alongside other suspects yesterday, the APC chieftain, Itunu claimed to be a personal assistant to Governor Kayode Fayemi of Ekiti State.

He admitted to have given the gun to one of the suspects identified as Omoniyi Ajewole whom he said was his political thug. But he stated emphatically that he never gave him the gun to rob with, but to protect him.

Ajewole escorts me with gun

According to him, “I have never participated in any robbery operation in my entire life. Ajewole is my political thug. He escorts me with the gun. All of us as chieftains were given slots in the state and as chieftains, we were supposed to work for the state government during the 2014 governorship elections.

“Every political party including ours, the APC, has factions. That was why I gave him the gun so that he could always protect me wherever I went. I also told him to be with me particularly as the Ekiti election approached.

“But before the elections, the Police stormed my house and arrested me. I found the gun on the ground during the 2007 elections violence in the state and had kept it for use. I am not an armed robber. I only gave Ajewole the gun to use for my protection. I cannot tell you more than that.”

Briefing newsmen on the development, the Force Public Relations Officer, Frank Mba, an Assistant Commissioner of Police, explained that the arrest was made following a petition by one of the victims that his two vehicles and other valuables were stolen at gunpoint in his Ile‑Ife home on June 27, 2013.

He said: “The matter was transferred to Federal SARS, where a team led by the Deputy Commissioner of Police, Chris Ezike, swung into action.

“After months of sustained investigation, detectives traced the stolen GSM handset to one Jacob who opened up that it was sold to him by Omoniyi Ajewole who claims to be a political thug. When Ajewole was picked up, everything that was stolen from the house in Ile‑Ife was traced to him.

“During interrogation, he confessed that the gun was given to him by a councillor. Investigation reveals that Ajewole is deeply involved in the whole process. He is not just a political thug as he claims, he is actually a member of the armed robbery gang.

“This systematic investigation led to the arrest of six suspects who have been clearly linked with not just the initial robbery incident that was reported but to series of other armed robbery incidents that have taken place in various parts of the country.

“Apart from the six robbery suspects, two receivers of some of the stolen vehicles were also arrested.

“Of these 17 recovered cars, 12 of them are Toyota products. That again explains why we will continue to advise Nigerians, particularly those who use Toyota products, to know that they must go the extra mile of safe guarding them.”

I am not a robber, but political thug— Suspect

Ajewole, 28, told journalists: “I am not a robber. I am a political thug, I work for APC. Honourable Itunu employed me last year and gave me a gun. He pays me N50,000 every month and also assists me financially in other areas.

“What I do is to guard him whenever there was any meeting between him and members of other parties and during campaigns. But I have never used the gun to rob.

“I only gave it as barter to a friend whom I collected some things from. I did not know he used it to rob. One of them was arrested and he brought the police to me.”

The receivers, Tolani Babatunde and Abubakar Umar, who are both car dealers, were arrested in Abuja.

Mba, therefore, called on politicians to play the game by the rules, warning that the police would bring the full wrath of the law on anyone or group of persons that would breach the law.

Meanwhile, a victim, a lecturer, who did not want his name in print was at Federal SARS to pick two of his vehicles that were stolen in Ile‑Ife.