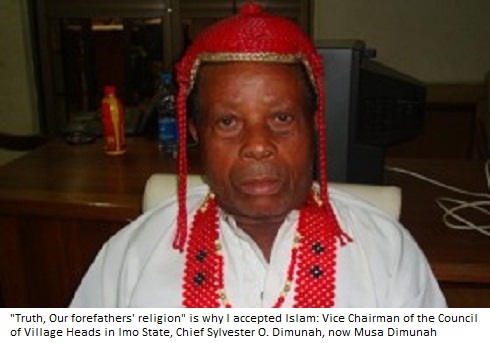 WeeklyTrust- Vice Chairman of the Council of Village Heads in Imo State, Chief Sylvester O. Dimunah, has said he accepted Islam due to the truthful nature of the religion and the steadfastness of Muslims.

Speaking when he visited Media Trust Office yesterday in Abuja, the traditional ruler whose name is now Musa Dimunah, said he was particularly influenced by the good nature of the former secretary of the council and the executive secretary of Justice Mamman Nasir Islamic Centre for Peace and Research, Malam Ibrahim BioboNlomije.

“I did not accept Islam, I only revert to the religion that our forefathers practice and the universal religion of humanity. I’m impressed by the good nature of Muslims’ love for everybody and hatred for none apart from the way they revere Allah and all the Prophets without discrimination.

“I am also impressed by the brotherhood and mutual respect for each other and other members of the community,” he said.

He also said he was not under any pressure to drop his old name for becoming a Muslim and that his children and other family members did not oppose his being a Muslim. Link: http://weeklytrust.com.ng/index.php?option=com_content&view=article&id=11799:why-i-accepted-islam-imo-traditional-ruler&catid=40:cover-stories&Itemid=26