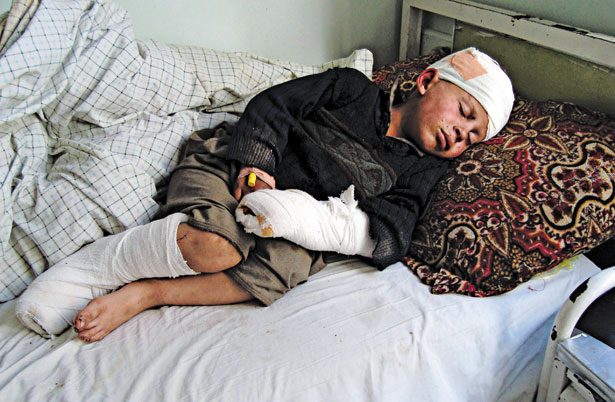 The beginning of the 20th century witnessed an odd, scary and baffling eclipse of reason. After a spark initiated a world war, nobody thought of the probability of reconciliation. The Ottoman Empire was dissolved, lands of the world were shared and the countries sought ways to exploit one another.

The WWI undoubtedly caused great harm to the states as well as to their respective inhabitants. In the mid-20th century, things did not change much. Again a single spark made those states, which were in the pursuit to share the world, fight tooth and claw. Following the massacres, atom bombs fell down on the masses. Fascist and communist leaders welcomed disasters not only upon the world but also upon their own people. The two world wars left millions dead. In the following years, they led the masses to disaster and left a legacy of corrupt ideologies that would come to instigate many wars.

The two world wars became a great source of regret for the world. Leaders who witnessed these wars took their decisions under the influence of this regret: Such destruction should never be experienced again! They tried to take control of anything and everything that could lead to a war. They established the League of Nations, which would later expand to become the United Nations. From then on, parties to a conflict would be able to convene around a table to establish peace. In order to prevent little sparks from causing great wars, they would try a path of diplomacy. In order to keep coal and steel, the raw materials for armament, under control, the European Coal and Steel Community was established. This institution would later become the EU.

NATO, which was established following the WWII and grew stronger with the outbreak of the Korean War, was an international military alliance. Yet its objective was to employ its military alliance not for war but for peace. However, this regret lasted for a very brief period of time. Before long, the necessity of peace slipped people’s minds. Imperialist ideas, competition over colonization, ambitions, egos, the arms industry, lobbies and the financial systems that have always profited from wars triggered new wars. Yet what was significant was the unmitigated desire to make war. Keeping peace was becoming more difficult, because the desire to make war was easy and definitely more profitable for some circles.

For this reason, wars started to flare up again in the 1980s. This time, the stage was not Europe but the Middle East. Nobody understood the cause or the winner of the Iran-Iraq war, which lasted for 8 years. The invasion of Kuwait by Iraq was simply a manifestation of this desire to make war. Saddam Hussein surely knew that such an attempt wouldn’t bring any favorable results. Many people thought that the 2000s would be different. However, the 21st century harbored greater desires not only for wars but for egos, interests and self-centredness. The materialist and interest-ridden mindset started to appear not only in politics but in societies. Societies digressed from their religious, spiritual and moral values. They stopped observing their traditions and fostering values of humanity.

In order to understand why wars have been preferred in such an insane manner and with so much desire, especially in the last 5-6 years, we need to analyze the radical changes in the society. The elements that lead people to become self-seeking are reflected not only in social life but also in politics, family life, relations between countries; in brief everything that we possess. The materialistic approaches cause societies to plunge into a deeper emptiness. They are also the reason for war. Nobody makes concessions in their own interests; they don’t pay any attention to those who are struggling. Indifference has become very widespread; people have begun to only feel satisfaction from a comfortable life. Very few people pay attention to the destruction of houses or neighbourhoods in other parts of the world.

We need to keep in mind that it was this mindset that started the world wars at the beginning of 1900s. Although as they followed the world wars people noticed that they had experienced a terrible nightmare, they never accused the materialist outlook, which is the reason for wars. Even though the Cold War was over and the countries established sound alliances among themselves, the reason that no intervention came into this scene, which became ever more horrible after 2011, is the selfish mindset we have been speaking of.

Currently, the UN does not make a common decision; NATO cannot intervene in these disasters; the EU is on the verge of disintegration. The Muslim world has been experiencing the brunt of this fragmentation for some time. Surely there are the arms dealers who benefit from wars and, to a great extent, this world has some leaders who work in the interest of those arms dealers. Yet the main reason for is not the arms dealers but the materialist mindset that imposes the idea that selfishness is the only path to survival. As this mindset gains ground, the desire to make war will always become more profound.

The month of Ramadan is the month of unity and solidarity. It is a blessed time when resentment comes to an end, the resentful make peace and those who have fallen apart band together. While the world is in this state, Muslims must pave the way for unity, especially during Ramadan. While the desire to make war in the world has grown stronger and people find it easier to hate than to love, we need to act instead of expect a solution from others. In this sense, the first thing to do should be to take a pioneering step toward unity.

The world might be in a state of disagreement and egoism. But as the Muslim community, we have the power to accomplish precisely the contrary. We hope that Ramadan in 2016 will be time for this unity and we can, as one, erase this horrible desire to make war from the faces and minds of the world.