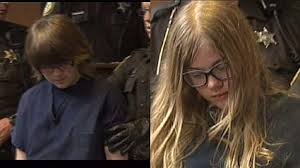 (CNN) — Two 12-year-old girls inspired by Internet horror stories are accused of luring a girl of the same age into a wooded area near Milwaukee before stabbing the victim 19 times and leaving her to crawl to her own rescue over the weekend.

The victim, a 12-year-old friend of the suspects, was in stable condition at a hospital Monday, two days after a bicyclist found her on along a road in Waukesha, city Police Chief Russell Jack said.

The suspects were arrested hours after the girl was found Saturday, and they were being held on preliminary charges of attempted first-degree intentional homicide.

The girls were identified in a criminal complaint as Morgan Geyser and Anissa Weier. read full: http://www.cnn.com/2014/06/02/justice/wisconsin-girl-stabbed/index.html?hpt=hp_t1