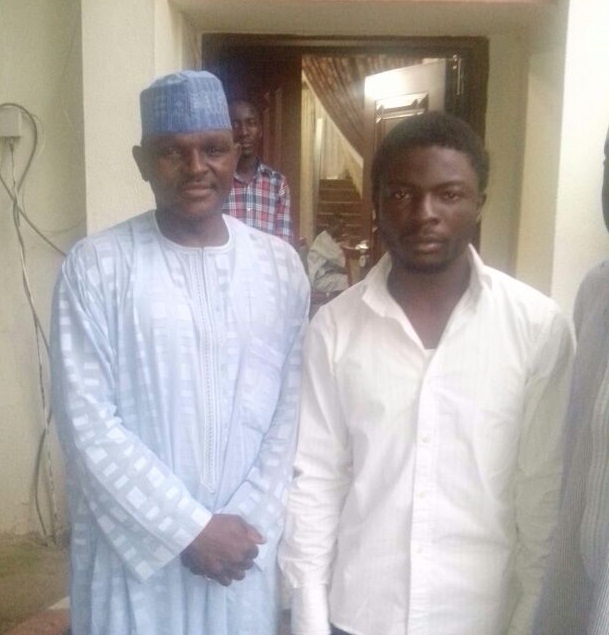 NewsRescue– My last article which was captioned “Open Letter to Al-Mustapha”; which went viral a few hours after it was posted, attracted a lot of feedback, observations and condemnations.

While some of those who read the article thought it was short and very informative, I came in for outbursts, anger and curses from others.

However, I got an email from a friend who thought I was grossly misinformed about Al-mustapha. He tried without success to convince me Al-mustapha was the best thing that ever happened since sliced bread, to no avail and in the end, accused me of being a non-conformist who wanted to stick to what he thought he knew, no matter how much anyone else tried to convince him otherwise. I laughed and told him to write a rejoinder and relay his points to the public as he did to me, and even offered to help him post it on this platform.

Many friends were scared of my meeting with Al-mustapha alone. “Why risk your life to satisfy your curiosity?” they asked; “Getting the answers I want is worth it” I replied. Many advised I made it public that I was going to see probably one of the most dangerous men during the Abacha junta. Others thought I should have a panic button incase I annoyed him so much and he decided to take action. Some were of the opinion I shouldn’t see him at all.

In the company of my good friends, Hon. Gambo Manzo and Alhaji Musa Shabiri (who are of the Arewa Youth Foundation), we stormed the Abuja residence of Major Al-mustapha. His residence seemed like a governor’s lodge, with a retinue of guards comprising men from the army, mobile policemen and plain-cloth men who looked like private security contractors, at his beck and call. For the first time in a long time, I got scared. I was almost peeing in my pants and quaked in my boots.

I was scared to the point of almost asking my friends to turn the car around and leave. Yes. I was that scared. Regardless, I was determined to see it through and after filling forms and getting frisked, we were allowed into his residence.

It wasn’t like I imagined a particular kind of accomodation the former CSO to the late head of state would be living out of, but what I saw next left my jaw hanging. The house was beautiful! A duplex with tasteful interior, bullet-proof windows and a flat-screen Tv as big as a window. And wait for it, a lot of guests who had come to pay homage to the major. The new hero of the north.

As we waited in the lounge, Al-mustapha’s wife came in beaming with smiles and warm greetings for everyone. I saw behind her facade. I saw a woman who had been sad for a long time. Who is only just getting used to being happy. I saw a woman who braved the odds and waited for her man. Ironically from what I have read, I saw a Kudirat Abiola in her. She had a house-help insert the DVD of the release of Al-mustapha and the celebrations that followed. How people cheered and waited for him at the airport. I felt goosebumps all over me. Why was a man so accused of ordering the assassination of a woman; Someone’s wife; Someone’s mother, be celebrated this much? Was there something I missed? Is there something about this man that was hidden from the rest of the country? Then I closed my eyes. The propaganda was working. It had probably worked on a lot of people.

Ten minutes later and he emerged from the inner chamber. Everyone stood up. And for some reason, I sat still. I couldn’t understand it. I just felt blood rush through my face, clenched my fists and decided against the next thought that crept through my mind. I am here to ask questions, I told myself, No more, no less. As he shook everyone’s hands, he got to me. I stood up, bowed, and shook his hands,then he ushered us into the inner chamber–My friends and I.

As we entered the room, he began speaking in the Hausa language. After everyone had introduced themselves, I introduced myself. And he said, “E kasan oo” (meaning good afternoon in Yoruba) and I smiled. A weak and feeble smile. Thereafter, he replied everyone’s questions in English. I made a mental note of that. He wanted me to understand what he was saying. My friend told him of my mission. And he asked me to feel free to ask him whatever question I wanted. A wry smile accentuated my lips..that was the blank cheque I needed. Al Mustapha was there for the taking, I mused…

Segun Dada: I have hundreds of questions for you. If I have to ask them all today, you won’t have time for anything else. Maybe you should find a more convenient time.

Al-Mustapha: Ask me the most troubling questions that you have.

Segun Dada: You were accused of ordering the assassination of Kudirat Abiola; the wife of the late MKO Abiola. Did you order her assassination or not?

Al-Mustapha: I have said this over and over again. But for the fact that this case is now at the supreme court, I won’t want to say anything definitive about it anymore. A court has proved my innocence before, I am sure the supreme court will do it again.

Segun Dada: Since your release from prison, you have been going around. From north to east to west and south. From religious leaders to traditional rulers and power brokers. What do you hope to achieve? What is your end game?

Al-Mustapha: What I have done or I am doing is expected of me. My going around is to appreciate those who were there for me during my incarceration. I have no end game whatsoever. None at all.

Segun Dada: There is a school of thought that suggests you were released for political reasons. How true is this?

Al-Mustapha: Again, I was vindicated by the court of appeal that found me not guilty. It took me 15 years to prove my innocence. There is nothing political about my release.

Segun Dada: A certain former minister of Abacha’s junta was reported by the papers to have paid the PDP chairman, Alhaji Bamanga Tukur, a visit recently to thank him and President Jonathan for their help in securing your release.

Al-Mustapha: I don’t know anything about that and I am not a party to it. I am back from incarceration and putting my entire life in order. I have also refuted this in the media.

Segun Dada: Another school of thought has said you will be President Jonathan’s running mate in 2015. How true is this?

Al-Mustapha: I assure you none of this is true. I am still in the Nigerian army. I don’t have any business with politics.

Segun Dada: The Lagos state government has taken this case to the supreme court. What do you think? Are you even remotely scared?

Al-Mustapha: I was vindicated before. Insha Allah, I will be vindicated again.

Al-Mustapha: I have not settled down properly. I assure you all of this will be put in consideration soon enough.

Segun Dada: Are you running for office in 2015?

The interview ended abruptly because of the arrival of a very important guest. Someone whom I learnt was very instrumental in the release of Al-Mustapha. G.B Momoh (SAN). A lawyer.

As I left his residence, I knew instinctively that Al-Mustapha won’t be leaving our public consciousness any time soon. He was here to stay. And it didn’t matter what anyone thought of him. He will be in our faces for a very very long time.

We can only leave judgment to God in this case. And we can only hope he delivers it in due course. The man I had just grilled made himself sound like the victim, the hunted and the victimized. I was confused. He didn’t get angry at the bluntness of my questions, or react to the disgust which filled my eyes when I first looked at him. Or the hardness of my face when we took a picture together. He smiled knowingly.

I called my mum to say I was still alive, contrary to her fears.

I am @Dolusegun on twitter, for more direct engagement.