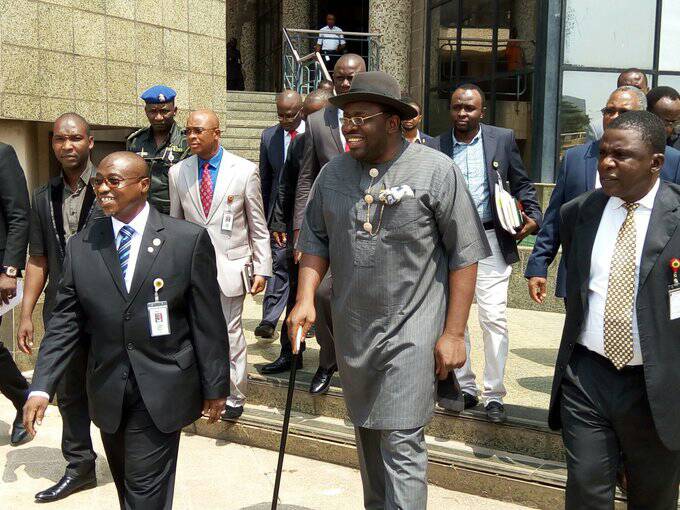 For physical and rapid development of oil producing communities in the Niger Delta, Governor Ser‎iake Dickson of Bayelsa State has called for effective collaboration between governments in the region and the Nigerian National Petroleum Corporation (NNPC) especially in ‎areas like security and the Brass LNG‎.

Dickson made the call on Thursday in Abuja when he paid a scheduled visit‎ to the Group Managing Director of the NNPC, Dr. Maikanti Baru, to discuss various areas of collaboration to drive strategic investments in Bayelsa State.

The governor in his remarks spoke of his government’s massive investment in security which has gone a long way to provide a safe haven for investors and their investment, noting that the state now rank as one of the safest in the region and Nigeria.

He called for NNPC’s support for the state’s Security Trust Fund to enable further investment in that sector and also solicited the cooperation of the NNPC for the Brass Fertilizer and Brass LNG projects, pointing out that the commencement of the two critical projects will impact positively in the economy of the state, particularly in addressing the issue of unemployment amongst the teeming youths.
While commending the GMD and its management team for their efforts since assuming office, the governor seized the opportunity to request the corporation to support its effort in the acquisition of oil operating license, stressing that the time has come for state governments to partner with the private sector to be more involved in the oil industry.

The Bayelsa State Chief Executive did not also fail to solicit the co-operation of his host on the development of its industrial park to stimulate the state’s economy using her abundant gas feedstock which can be converted to power for companies to run their operations, saying the land has been acquired and dredging is ongoing at the moment.

The NNPC Group Managing Director, in his response lauded the governor for his giant strides, particularly his massive investment in security given the need to keep the state safe in order to attract investors.

On the state’s industrial park, the NNPC helmsman  was very categorical in the corporation’s willingness to partner with the state government to also build a power plant at the industrial park.

“We will deploy our collaboration with General Electric to ensure that the plant come on stream. It is our believe that our partnership in this regard will stand out as one of the legacy projects of your government”.

Present at the meeting were, Maxwell Ebibai, Commissioner for Finance, Cyril Akika, Special Adviser on Investment, Richard Ogugu, Managing Director of Bayelsa Oil and Gas company and some senior aides of the governor‎.