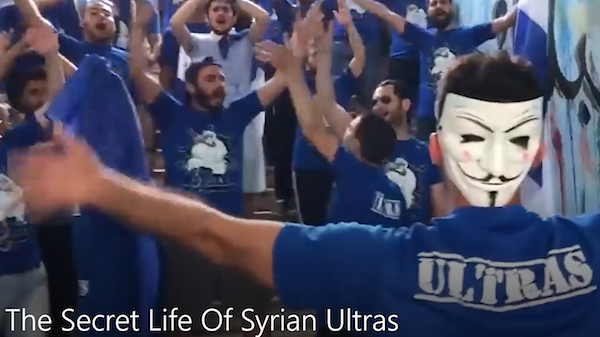 In a boost for the regime of President Syrian Bashar al-Assad, the Syrian squad’s 2-2 draw was enough for the Syrian team to maintain hopes of Syria reaching the World Cup finals for the first time in its history.

Similarly, the match in which Syrian women, some with their hair uncovered, were granted access to the stadium while Iranian women fans were barred, has sparked public debate in the Islamic republic about the viability of a ban on women attending men’s sporting events.

In doing so, the match has achieved in Syria what neither the Syrian government or the opposition have been able to accomplish: a momentary sense of unity in a country torn apart by a brutal, six-year old civil war.

Neither development is certain to produce a lasting outcome. Syria is more likely to remain splintered even if Syria progresses in its already stunning soccer performance against all odds.

By the same token, support for women’s passive sporting rights in Iran is more likely to be stymied by conservative forces strengthened by the lack of an economic trickle-down as a result of the lifting of international sanctions and the Trump administration’s efforts to undermine the two-year-old nuclear deal.

Nevertheless, the admission of presumably predominantly Syrian Muslim women fans to the match, makes defense of the Iranian ban difficult, if not impossible. The Syrians were admitted on the principle that the Iranian ban does not apply to foreign fans. In past incidents, foreign women admitted into Iranian stadiums came primarily from non-Muslim countries.

The case of the Syrians, however, undermined religious arguments in favour of the ban and projected it as one not based on gender but on nationality. Activists on social media charged that the discrimination against Iranian women was humiliating and insulting.

Adding insult to injury, authorities allowed two women members of parliament to attend the match at the request of Tayebeh Siavoshi, a reformist deputy. Parvaneh Salahshouri, another member of parliament refused the invitation.

“At a time when girls of this country have no choice but to dress as men to get into the stadium, I as a representative of these people would not like to be present in the stadium by receiving a special permit. I go in when they too can come in,” Ms. Salahshouri said.

Ms. Salahshouri was referring to repeated attempts by women to smuggle themselves into Iranian stadiums by disguising themselves as men. A dual British-Iranian national, Ghoncheh Ghavami, was imprisoned in 2014 for attempting to smuggle herself into a stadium to watch a men’s volleyball match. She has since been released.

The differentiation between Syrian and Iranian women prompted an aide to President Hassan Rouhani as well as Islamic scholars known as moderates or reformists to publicly support a lifting of the ban.

“Just as the government managed to pave the way for the presence of women at volleyball matches, the same thing can happen for soccer,” said Ayatollah Mohsen Gharavian.

Iran’s public debate and increased activism in the immediate aftermath of the World Cup qualifier builds on Iran earlier this year allowing women spectators to attend a premier international men’s volleyball tournament on the island of Kish in a rare bowing to international pressure. It constituted a rare occasion on which the Islamic republic did not backtrack on promises to international sports associations to lift its ban on women attending international men’s sporting events.

The issue of women’s passive sporting rights promises to split not only moderates and hardliners but also the Iranian sports community. Sports Minister Masoud Soltanifar suggested that the government would look at creating facilities for families in stadiums, a formula that like in Saudi Arabia would create separate public spaces for men and for families, including womenfolk. “I am confident that the fans would respect boundaries which need to be respected,” Mr. Soltanifar said.

In an unprecedented move, Peyman Yousefi, a sports anchor on state-run television, said on air minutes before the qualifier that he was disappointed that women had not been allowed to enter the stadium. Earlier, the Iranian Football Association said that it had no plan for allowing women to attend the qualifier after a website for the first time was selling tickets for women as well as for men.

If the role of soccer in war-torn Syria and women’s rights in Iran have anything in common, it is the struggle for unfettered access to stadiums. Nonetheless, if the political ripples of the Iranian-Syrian soccer encounter have any legs, it’s more likely to be the case in Iran than Syria. The qualifier has taken the debate on women’s sporting rights to a new level by pushing it beyond an issue promoted primarily by activists into the political realm.

In Syria, memories of lost ones and the brutality of the Assad regime were never far even as many opponents of the Mr. Al-Assad cheered the Syrian national team, aware that the president would use the match to his political advantage.

Beyond the deep scars of the brutal civil war, militant Syrian fans are however already organizing to counter government moves to politically control the sport. The fans untied this summer to successfully reject an attempt by authorities to identify members of the country’s various groups of ultras, hardcore, often politicized fans.

“They wanted to control them who are going inside the stadium and who’s going out and why. The six ultras groups that are active in Syria now decided not to give them what they want. It is part of our right as ultras and as football fans to be there,” said Nadim Rai, a supporter of Syrian club Hutteen SC.

“In my place in the stadium and you are in another place, I hate you and you hate me. But one hand is strong, but two hands, they are more stronger. So, why we not all stay together, make something, not just football but make something to help our country?” added Rami, a fan of Al Karama SC.