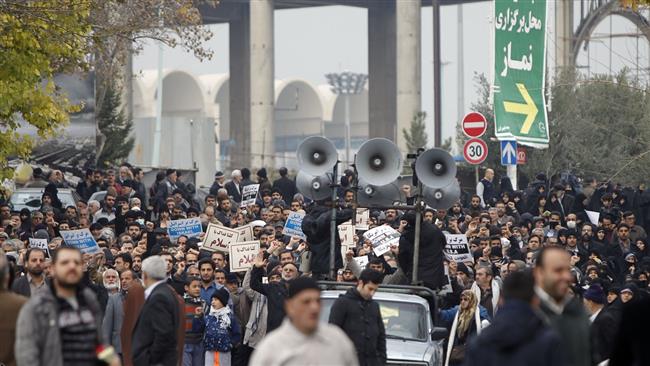 Iranians have staged demonstrations in the capital, Tehran, and several other major cities across the country to condemn Nigerian military’s bloody crackdown on the Shia Muslim community in the African country.

Tehran saw people taking to the streets in droves after the Friday Prayers to show support for the Shia Muslims in Nigeria.

The protesters chanted slogans and carried placards in condemnation of the international community’s silence on the massacring of the oppressed Nigerian Muslims.

Local media said on December 12 that more than a dozen people were killed after clashes erupted between the Nigerian army and Shia Muslims in the northern city of Zaria in Kaduna State.

The clashes broke out when Nigerian soldiers opened fire on the people attending a religious ceremony at Hussainiyyah Baqeeyatullah, a religious center belonging to the Islamic Movement of Nigeria (IMN). The Nigerian military accused the Shias of trying to stop the passing convoy of Nigeria’s Chief of Army Staff Lieutenant General Tukur Yusuf Buratai.

The military accused the Shias of attempting to assassinate Buratai – a charge Ibrahim al-Zakzaky, the IMN leader, denied at the time.

One day later, Zakzaky was arrested during a raid by the army on his residence and the buildings connected to the Shia community in Zaria. Local sources say hundreds of people trying to protect the cleric were killed.

On Friday, Spokesman for the Islamic Movement of Nigeria Ibrahim Musa told Press TV that Nigerian officials are still withholding information about the whereabouts of top Muslim cleric Sheikh.

Meanwhile, a senior Iranian cleric on Friday condemned the recent bloody terrorist attacks against Shia Muslims in Nigeria and said the Nigerian government is playing into the hands of the Israeli regime and Takfiri groups.

Speaking during a sermon to worshipers at the weekly Friday Prayers in Tehran, Ayatollah Ahmad Khatami added that the horrendous crime that the Nigerian army committed was beyond description.

He dismissed as a “lie” the Nigerian government’s claim that Muslims had blocked the army’s convoy.

Khatami condemned the killing of hundreds of innocent people and burying them in mass graves in Nigeria and said the Nigerian government must know that it is playing into the hands of the Zionists and Daesh Takfiris by committing such crimes.

The Iranian cleric urged the Nigerian government to stop committing such criminal acts against Shia Muslims.

The IHRC chairman, Massoud Shadjareh, has also confirmed that more than 1,000 people were systematically killed in the Nigerian army’s brutal raid on Shia Muslims.