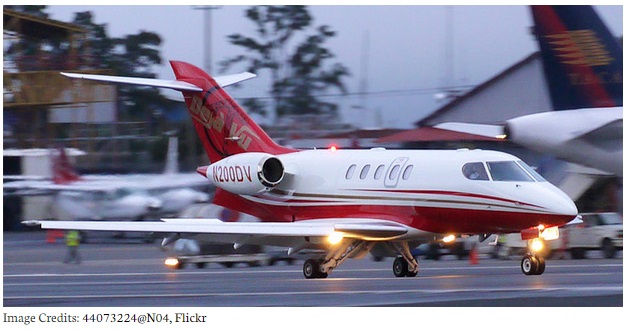 World leaders traveling to this year’s Davos Economic Forum in Switzerland will reportedly board about 1,700 private jet flights to reach their destination, where ironically the topic of how to tackle “climate change denial” will be discussed.

The annual globalist confab of power brokers, economists, journalists, world leaders, pop stars and titans of industry meets through Friday to flesh out various issues they believe to be affecting the planet.

One of the items on the agenda: “How can we tackle climate change denial?,” a problem threatening the implementation of a carbon tax scheme long in the works.

Oblivious to the irony, forum attendees from all over the world booked tens of hundreds of flights into Geneva, collectively spending hours polluting the airways.
“Roughly 1,700 private flights are expected over the course of the week, which is twice as many as normal, according to WINGX Advance, a tracking firm,” CNN Money reports.

A June 2008 Institute for Policy Studies report, entitled, “High Flyers: How Private Jet Travel is Straining the System, Warming the Planet and Costing You Money,” (.pdf) revealed “An hour of flying in a private jet burns as much fuel as an entire year of driving.”

“Four passengers flying in a private Cessna Citation X from Los Angeles to New York will each emit 8,892 pounds of CO2 into the atmosphere. This is more than five times as much CO2 emitted by a commercial air passenger making the same trip,” the report added.

“Don’t worry. I’m sure these will be non-polluting private jets powered by carbon offsets and unicorn magic,” jests FrontPageMag.com’s Daniel Greenfield. “They will not in any way add to the heat death of the earth. Unlike you, toting your groceries home in a plastic bag in the back on an SUV.”

Among this year’s meeting attendees is none other than climate change advocate, multi-millionaire and former vice president Al Gore, whose name has become synonymous with the ongoing effort to convince humans we’re the primary cause of global warming, a stance many non-establishment scientists largely contradict.
Scientists at the Indian Science Congress, for example, recently expressed concerns that “man-made global warming” was being blown out of proportion, pointing out that polar ice caps were melting before humans were on Earth.

“While I agree that glaciers are melting because of global warming, if this is because of man, then what was the reason for the melting of the glaciers in the Gondwana period long before man arrived on the planet?” asked Dhruv Sen Singh, a University of Lucknow geologist.

“The polar ice is increasing, not melting away,” Coleman said in an open letter to the Intergovernmental Panel on Climate Change. “Polar Bears are increasing in number.”

“Heat waves have actually diminished, not increased. There is not an uptick in the number or strength of storms (in fact storms are diminishing).”

“I have studied this topic seriously for years,” he added. “It has become a political and environment agenda item, but the science is not valid.”

Despite a host of dissenting voices, an overwhelming majority of the U.S. Senate passed a measure Wednesday declaring “climate change is real and is not a hoax.”

While voting in favor of the measure, Oklahoma Senator James Inhofe pointed out that the only “hoax” regarding climate change is the belief that it is man-made.

Watch: Lord Christopher Monckton puts climate change in its place once and for all.