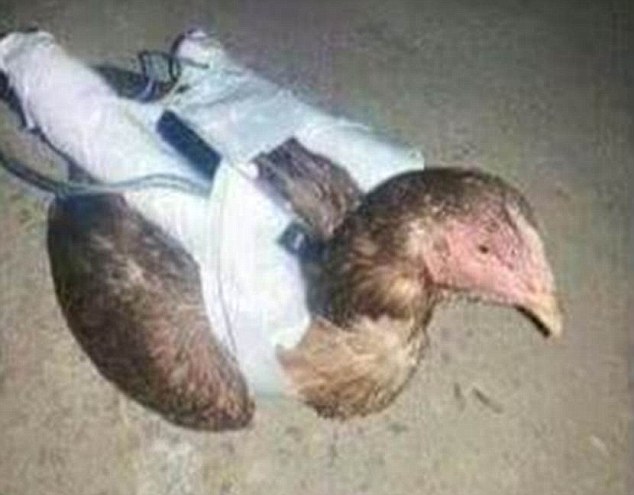 Depraved jihadis fighting for the Islamic State in Iraq have started using chickens as mobile improvised explosive devices, it has been claimed.

Members of the terror group operating in and around the city of Fallujah are said to be strapping explosive belts to chickens, which are then encouraged to wander into enemy camps.

Once the chickens are successfully within striking distance without having aroused suspicion, the ISIS extremists apparently use remote controls to set off the devices, killing all those close by.

Images of the Islamic State’s so-called ‘suicide chickens’ have been widely shared online by both pro and anti ISIS users, although their authenticity could not be verified.

Details of why the terror group are apparently using exploding birds were told to the Daily Star.

The crude devices show how ISIS is running low on ammunition following several years of all out war in Syria and Iraq, the newspaper quoted unnamed experts as saying.

‘ISIS will use whatever means they can to bring death and destruction. Using animals has little military value – it is just another example of how their twisted minds enjoy dreaming up bizarre ways to kill people,’ a unnamed British man fighting alongside Kurdish troops in the region added. 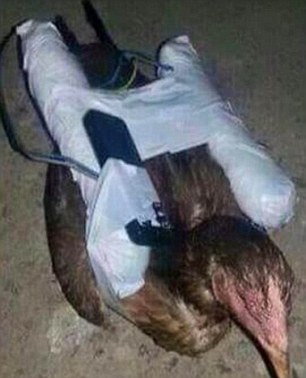 The bizarre claims that ISIS are using suicide chickens comes just days after reports of the terror group strapping IEDS to a goat that was sent into a Kurdish base in the Syrian city of Kobane.

ISIS are thought to have been behind five co-ordinated car-bomb attacks in Gaza yesterday, targeting members of Hamas and Islamic Jihad.

The devastating blasts rocked a quiet area in the north of Gaza city, destroying five cars thought to belong to members of the Ezzedine al-Qassam and Al-Quds brigades.

The attacks come amid growing tensions between the Palestinian territory’s rulers and extremist opponents.

Yesterday’s attacks are believed to be the work of hardline ISIS supporters, looking to destabilise Hamas’ control of Gaza strip.