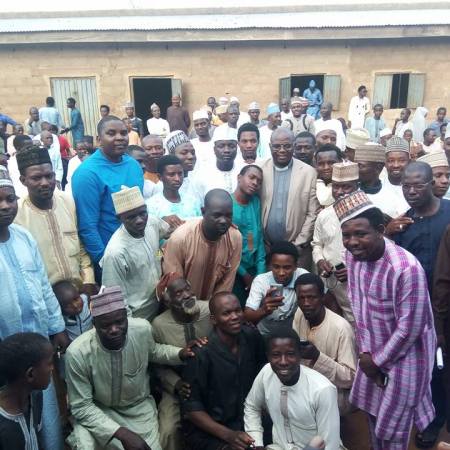 Northern Christian Cleric has felicitated with all Muslims across the 36 States of the Federal including Africa as they continued to mark the arrival of the newly Islamic year and urged them to intensify prayers for peace and unity in the country and west Africa at large.

Pastor Yohanna Buru who made the called when he visited some muslims scholars in kaduna to immensely extend friendly relationship,with the aims of boosting interfaith activities and peace building.

He wishes every Muslims in the state, and across the world a happy Islamic New Year celebration, and enjoined residents of the state to continue to live harmoniously and peacefully with tolerance and understanding to support Government mission in promoting peace and unity among its citizens.

According to him, Nigerian must show tolerance, forgiveness and help Government in spreading the message of peace, unity among its citizens and also to support the government in tackling all forms of ethno-religious, political and regional differences in other to make Nigeria great.

The Christian leaders called on Federal and State Governments to declare the first day of the Islamic calendar as a public holiday to allow every Muslims enjoyed the arrival of the news year in a special ways like how they celebrate the English new year.

“Some states in Nigeria do usually declared public holiday to celebrate the day,and this would enabled our muslims brother celebrate in a special way.”

“We must congratulate our Muslims brothers that are celebrating their Happy new year Today. We should always remember that we are from one family Adam and Eve, worshiping one God; and we all believed in paradise and hell, as well as believed in the day of resurrection.

“We believing also in Holy Bible and Qur’an, therefore, we congratulate the Muslim Ummah round the world. We are hoping to join them in the celebration to promote religious tolerance and forgiveness. We appealed to all Muslims to always remember the less –privileged in the society, begged them to assist Orphans and widows,and The IDPs.

The Christian leaders however enjoined the Muslim to promote peace while calling on the Muslims and Christian youth leaders to shun hate speeches and encouraged youth to always live in peace and harmony.

Also responding, Evangelist Jonathan of Christ evangelical and life intervention ministry says, “we congratulate our muslims brothers for the arrival of the new Islamic calendar.”

“We wish all our muslims brothers and sister happy celebration while calling on Government to declare public holiday on day like this.”

In his remark Mallam Gambo Abdullahi Barnawa, who is one of the youth leaders that toke the delegation to pastor Yohanna house said, the celebration of the happy new Islamic year is not only for Muslims but to all human kind, while thanking the Christian leaders for Sending SMS to Muslims youths in congratulating them for the new Islamic year.

In a separate remark, The specialist on interfaith matters in Nigeria and peace Ambassador Hajiya Ramatu Tijjani said, “we are one under one family.”

While calling on both muslims and Christians to be their brothers keepers.

She equally adviced federal government to declare public holiday on day like this in other to allow muslims celebrate the day in a special way.

Ramatu congratulate Muslims world wide and urged them to pray for world peace and stability across the planet.

Islamic New Year is considered to be the second holiest day in the Muslim calendar after Ramadan.