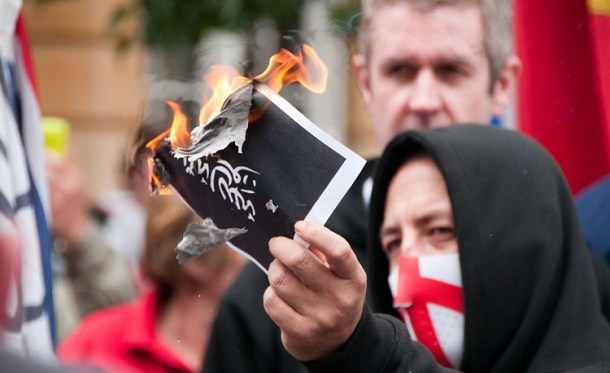 (CNN) — Fears were growing in Britain Monday of a surge in Islamophobia in the wake of the knifing death of a British soldier last week that his suspected attackers claimed was revenge for the deaths of Muslims worldwide.

Officers arrested two men in the town of Grimsby on England’s east coast on suspicion of arson after a mosque was set on fire, according to Humberside county police. No one was injured in the blaze.

The anti-Muslim English Defence League demonstrated in the town’s center the morning before the fire. On Monday hundreds of EDL supporters marched near the central London office of Prime Minister David Cameron.

Enraged by the murder of British soldier Lee Rigby in the southeast London neighborhood of Woolwich Wednesday, the EDL has called for marches around the UK.

In a demonstration in Newcastle on Saturday, angry supporters cried out for Muslims to leave the country. EDL demonstrators threw objects at counter demonstrators, and police stepped in to keep the raucous men from going after their opponents. Read more on CNN