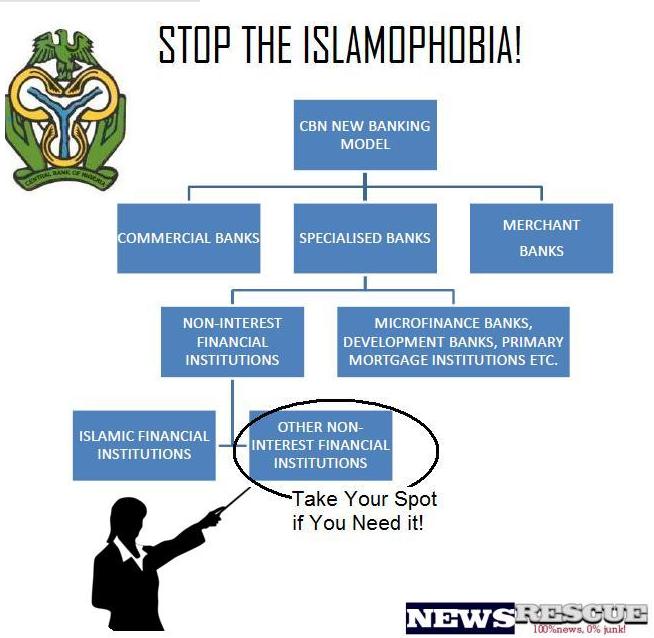 NewsRescue- First of all, Islamophobia, the hate and intolerance of Islam, Muslims and anything affiliated, is not new in Nigeria, Africa’s most populous nation. Many Christians have always been known to be intolerant of Muslims, perhaps due to a history of religious fracas between these two large groups. However the level today is above anything that has ever been in the past, this largely due to the Boko Haram terrorist sect, responsible for 100s of deaths in Nigeria of Christians, but also Muslims.

The CAN president, Ayo Oritsejafor, a pro-violent secessionist from the Niger Delta region, has in his ways, contributed largely to the level of Islamophobia. Firstly, he falsely exaggerated the discrepancy in Boko Haram related deaths on “his” side of the divide. US officials had mentioned that Boko Haram had killed more Muslims than Christians, but to provoke anti-Muslim sentiment, CAN president, presented misleading data against this easily verifiable fact.

Firstly Boko Haram has been targeting Northern Muslims long before they started a recent serious Church bombing campaign. Governors brothers, deputy Governors, large swaths in markets, public buildings, etc, in fact the largest Boko Haram strike, famously called ‘Kano 200’, was against the citizens of Kano, and numbers have this affecting Muslims more than Christians. But talking numbers either way is sectarian, immature and evil. Any innocent human matters. Boko Haram is an evil, terrorist group, and all attacks are evil.

But CAN president even went further to spark Anti-Islamism in the North by encouraging Christian youth to pick up arms, and in a treason call, fight innocent Muslims for the crimes of Boko to divide Nigeria. This call was answered in the recent Kaduna terror attack. Boko Haram terrorists struck a Church in Kaduna, killing few Christians. In answer to Ayo Oritsejafor, the CAN presidents call, Kaduna Christian youth picked up arms and killed innocent Muslims on Bikes, traveling by in cars, buses, etc. Over 200 innocent Muslims were killed in youth mad rampage.

This example is like the LRA of Uganda, that Christians fanatic group led by Joseph Kony. If that group carried out its usual terrorist attacks, for non Christians in the DR, Congo and Uganda to be called upon to attack any Christian in the area for the crimes of Christian fanatic Joseph Kony’s LRA terrorist jungle group. This would be absurd. The crimes of Joseph Kony are terrorist crimes and only he should be pursued and punished for them, not all Christians. This is the same way it is highly irresponsible for the CAN president to make all Muslims appear as culpable for the crimes of Boko Haram.

Some argue that it is not in Christian nature to like Muslims, since Christians preach everyday that Muslims by default, will certainly spend eternity in hell for not “accepting” Jesus(U) in the way they do. Thus, they can not love people they view as condemned to death eternal, due to their post-colonial interpretation of the Constantinian 73 book version of the Bible. I disagree with this view. They do not have to expect or understand my salvation to respect and tolerate me. I as a Muslim believe that all good people who believe in God and His messengers and do good, will go to heaven. But this does not make me disrespect and wish death upon non believers.

The media were also irresponsible in the Kaduna episode, also promoting anti-Islamism, by calling the Christian youth rampage strikes and murder of innocent Muslims, as “revenge” attacks as against “misdirected criminal responses”, which is what they were.

All this, with constant media skew, many reporters being southerners and pro-violent secessionists has fomented a highest level of Islamophobia among Nigerians on and offline, than ever recorded in the past.

A recent post on Sahara Reporters, clearly portrays the level of hate among readers.

The post described that a prominent Sheik in North Nigeria, Gumi had said that ‘Muslims were good in Nigeria’. Reactions were heated and nasty, “Gumi is a terrorist”, “And Christians are bad, right”. “We knew Gumi supported Boko”. “Lie, everyone knows Muslims are bad”, etc, etc.

Unthinkable responses filled the pages. What was expected? Because Sheik Gumi clearly as do most other Muslims, condemn Boko Haram, he is expected to also condemn Muslims and speak and preach bad about them in his sermons, to gain the love and tolerable reactions of Christians?

Sahara Reporters when they first came out, were targeted against corrupt government, now it seems they are targeted against Muslims, not even relaying to their readers the fact that it is a corrupt government, and dirty politics and politicians that created Boko Haram, as they did Bakkasi boys of the east and MEND terrorists of the South. And that the government still shields Boko Haram sponsors, so the public should fight the government and not each-poor-other. Rather Sahara Reporters seeks an anti-Islam story every day, even a robbery by unknown men in the North is written as a terror story to stoke the flames of sectarian strife and anti-Islamism.

Gumi even cited exactly what he was talking about, which could be easily read in the story, even though Sahara Reporters gave it a misleading caption. Gumi’s examples were of Nigerians like Sanusi Lamido, who cleaned up Nigeria’s financial act. And Nuhu Ribadu, whose braveness, well linked with Islamic character, included them arresting their bosses, and their decency and honesty, enabling them fight corruption in ways uncommon among Christians in similar positions, and unknown in Nigerian History among anyone.

Buhari and Idiagbon were likewise some of the leaders who fought evil and corruption in ways unseen in Nigeria today, and they too were Muslims. Yaradua killed Muhammed Yusuf, and up to a 1000 Boko Haram members with a conviction that Goodluck Jonathan, a southern Christian lacks today. This list can go on and on. Gumi was insisting that it is dishonest to portray Muslims as simply for evil and harm in Nigeria, not recognizing the very many great Nigerian Muslims and their actions that rival any. Christians have ruled Nigeria for 23-28 of its 51 years since independence, and there is nothing different or better to show for their reigns. But Muslims and the North is always accused unfoundedly, and this is promoted by a Christian dominated media. I guess that’s what you get for not learning “Boko”, Western orthography and media/journalism.

I recently posted a sharp criticism of Muhajid Dokubo Asari, the terrorist who led the violent, deadly economic and military southern war against Nigerians, supposedly for the Niger Delta problem. He had in some media reports likewise threatened to fight the entire Muslim North due to the acts of the Boko Haram terrorists. This type of madness, I criticized, asking why he did not fight high sea piracy, kidnapping, child witch hunting and other criminal activities in the South. Should the entire South be insulted and threatened sue to the actions of these criminals? Muslims are not so intolerant to react in such a way.

It has been reported and detailed, that suspiciously, most of the times the person trying to bomb a Church was caught, or suppliers of ammunition were captured, they had Christian names. Evil is evil, and it has neither religion, nor zone. And also good is good, and love is love, regardless of ethnic or religious affiliation.

Estimates are that the Muslim population of Nigeria, interspersed North and South is 120 Million, compared to about 50 million Christians. A census with column for religion, rejected by Obasanjo will prove the reality of the numbers once and for all.

The current governor of Kaduna is a Christian, we Muslims voted for him. Likewise, Christians voted en-mass for Muslim Abiola. In same vein Muslims voted en mass, though regrettably, for Goodluck Jonathan, a Southern Christian. We are all intermarried and inter-living. Most Yoruba states have Muslim governors. Nigeria is not as the media commonly lies for whatever reason, divided roughly into a Muslim North and Christian South, many northern states have as much or more Christians, and so also southern states, Muslims. Mujahid Dokubo Asari led the southern war as a Muslim, with Muslim mindset, and the kind response to the Delta situation, the Amnesty program was done, not by Obasanjo, or Goodluck, but by Muslim Yaradua.

We all love Hausa Suya. There have been bad Muslims and regrettable riots up North due to ignorant youth, but we should be working toward peace, tolerance respect and coexistence rather than directly orchestrating deaths with the messages we type online and the hate we spew offline.

Can we just get along? We have Boko terrorists to go after together!