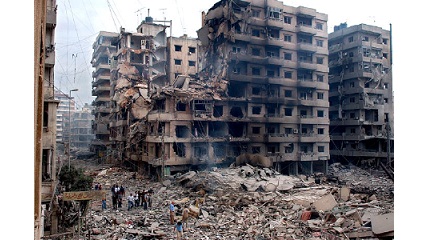 Following the inevitable collapse of Syria, Israel will invade Lebanon and “the damage will be enormous,” a senior officer told Haaretz on Thursday.

“The destruction will be greater in Lebanon than in Israel and the amount of explosives which will fall there will be far more than what will fall here,” said an IDF officer. “We will need to be strong and aggressive.”

IDF Brig.-Gen. Herzi Halevy said blame for the coming Israeli invasion will be attributed to Hezbollah due to the Shi’ite paramilitary organization’s establishment of bases in villages and towns located in southern Lebanon.

Hezbollah was organized in response to 18 years of Israeli military occupation of southern Lebanon. It has since established itself as a major political broker with veto power in Lebanon’s parliament and control of eleven of thirty seats in the cabinet.

Israel claims Syria is transferring missiles and chemicals weapons to Hezbollah. Israel has indicated it is prepared to use military force to prevent Hezbollah from obtaining Syria’s weaponry, Maj. Gen. Yair Golan, head of the Israel’s Northern Command that borders Lebanon and Syria, told the UPI on May 31.

Halevy said Israel blames Syria for “terrorist activities” on its northern border “and is preparing accordingly,” according to Jonatan Urich of the IDF.

Halevy added that “the IDF is preparing seriously and professionally for another Lebanon war. The response will need to be sharper, harder, and in some ways very violent.”

“The Goldstone report will pale in comparison to what will be here next time,” Halevy warned, referring to the 2009 UN report documenting Israeli war crimes in the Gaza Strip. Israel’s Operation Cast Lead, also known as the Gaza Massacre, was later determined to be a serious violation of international humanitarian law. The July, 2006 invasion of Lebanon killed over six thousand people and displaced nearly a million. Israel, with the active support of the United States, decided to invade the country and destroy Hezbollah, which receives support from Syria. Israel did not manage to decisively defeat the popular Shi’ite group and retreated the following month.

On June 29, the Joint Task Force Lebanon, a U.S. European Command operational unit assigned responsibility for military support to the American Embassy in Beirut, began Angel Curator 2, an exercise designed to simulate the evacuation of civilian and UNIFIL (United Nations Interim Force in Lebanon) personnel and their families “as a result of natural events such as earthquakes, floods and environmental catastrophes,” according to Il Gazzettino, an Italian newspaper.