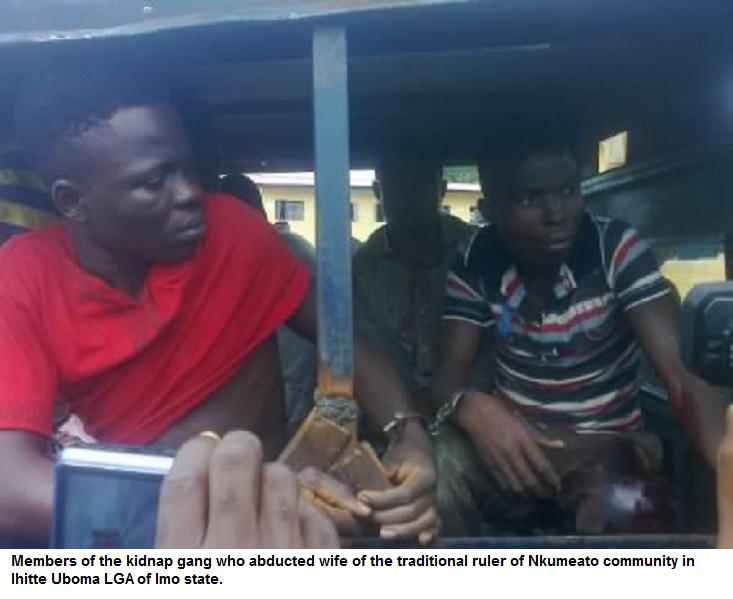 Following media reports that the Imo State commissioner of police, Mr. Muhammed Katsina has been transferred to replace his controversial Rivers State counterpart, Mr. Joseph Mbu, the Imo State police boss has denied being transferred out of the state.

Speaking to 247ureports after parading the kidnap suspects before newsmen at the state police headquarters in Owerri, Mr. Katsina said, ‘I de kampe for Imo doing my job, and i’ve not been transferred to anywhere.’

Earlier, the commissioner of police disclosed the wife of the traditional ruler who was kidnapped last weekend was rescued after a coordinated operation that lasted for 48 hours.

He said three suspects including the ring leader, Chizuru Osuagwu(aka Point One) from Obowo were arrested  while the operation was still ongoing.

According to the police boss, it was Ogbanje who led a 15 -man gang that invaded Naija Plaza Hotel, Oguta in February this year killing the Managing Director of the hotel, Chief Emeka Esieme and two policemen before taking away their rifles.

He said the command’s response to the situation then led to the arrest of 14 members of the gang while the ring leader, Ogbanje escaped.

The gang, he added, had been identified to be responsible for attacking and robbing UBA and First Bank Orlu branches sometime last year and First Bank Amaraku in Isiala Mbano LGA early this year.

Mr. Katsina happily informed the press that the escaped Ogbanje who relocated to Lagos, sneaked into Owerri Monday night and converged with his recruits at a hideout in Umutako Ifakala in Mbaitoli LGA where they were planning to attack and kidnap a prominent member attending the women’s annual August Meeting.

He posited that the deadly gang was sighted by police strategic partners and alerted the near-by Anti-kidnapping Squad who engaged them in massive gun fire, adding that in the course of which Ogbanje was gunned down while his converts fled abandoning their weapons.

Some of the items recovered from the gang include one AK 47rifle with police colour strongly believed to have been one of the two rifles snatched from the slain policemen at Naija Plaza Hotel; one military Assault Rifle; three pump action guns and fifty Live cartridges.

The police boss used the opportunity to warn criminals who are still in the state to leave of face annihilation by his men as he was not ready to waiver nor shrink while trying to ensure a crime free Imo society. -247