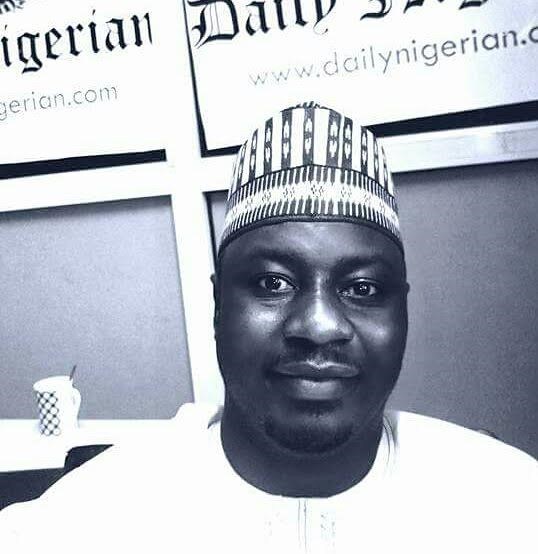 The person in question has earned a reputation for the construction of reality that exists in his own mind only. Jafaar Jafaar, one writer – I don’t regard him a journalist— known for his stray ideas about strong personalities, has carved a niche for himself in the gullible, ignorant north, as a master of an art. In the latest display of the usual dance, he is up against the Emir of Kano, someone who is the opposite of the writer in every sense of difference.

I am sure he has been commissioned by mischief makers or some royals in the house’s other half of Bayero to do the job—to divide the House and to incite anarchy for some power claim.

Am happy he is exposing himself this much to the gallery.

I am also happy that his readers will now see his patterns of writing and inviting the big question: Why is Jafaar Jaafar’s pen sharp only when he is writing about ‘money scandals’? He has engaged in many such writings to depict governors, in particular, in bad light. I remember one bitter piece on Yobe and when the Adviser to the Governor called his attention to correct some impressions, he didn’t listen, and broke into insults. I called the friend and asked him to ignore him. Ignoring is the best.

He is the typical thug of the pen among many redundancies of their type, who are maddened by the locks on the loopholes of corruption. There is no stray money for them and their job doesn’t pay regularly – mischief contractors are discouraged too— and so they have to go into blackmail to get bribes. They are not journalists. No. Not by any measure. He collected some 200k recently though he denied it.

There are many of their types all over Kano, Kaduna and Abuja. They are a clique of the same north-westerners that have strangulated the north to the very menace Emir Sanusi is trying to help the political leadership understand its dimensions and the dangers of further neglect of the problems.

Jafaaf jafaar and co are bystanders for politicians who lose elections. They pay them to cook lies against the incumbency just to raise dust and create crises, distracting governments from work and delivery. They have cheated our people for long. They are still on it, until Allah injects them with terminal diseases.

It is unfortunate that same group of pen blackmails frustrate our attempts to educate proper journalistic skills. When our diplomates and graduates take up jobs in their organisations and would want to apply current skills, they pull them back and say, ‘we have been doing this job before you were born. Sit down.’ Deep-seated bottlenecks for modern practise.

Their many types have put a lot of issues on the new government at the beginning, making all sorts of noise, claims and accusations. Some of them have pushed themselves and got some junk appointments in the federal government. Now they are silent because they are eating. Stupid potbellies.

Jafaar Jafaar talks like he is a Kano prince and writes that much to want his own share of the riches of the Kano Emirate. What concerns a slave with this surpassion on matters of princes?

He would have been the worst even just as the Emir’s Chief of protocol. That’s not how to get there, please. The era of dogma is over all over the sectors. Go and be decent and remake yourself more relevant.

But thank Allah some will never be anywhere near benevolent leaders again, even if they can claim royalty but have no royal hearts, even if they have to torch the Emirate.

Because we have come to the crossroad and even if persons like them must die, the poor of the north has Allah’s mercy now.