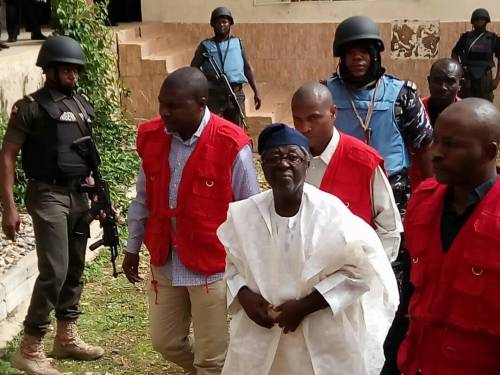 Jonah Jang, former Govern of Plateau State, was on Wednesday arraigned by the Economic and Financial Crimes Commission (EFCC) before Justice Daniel Longji of the Plateau State High Court sitting in Jos on a 12-count charge bordering on misappropriation of funds to the tune of N6.3billion.

Jang, a serving senator, allegedly embezzled special funds released to the state by the Central Bank of Nigeria (CBN), two months to the end of his governorship tenure in 2015.

Specifically, Jang allegedly pocketed N2billion released by the CBN for disbursement to small and medium enterprises in the state under the Micro, Small and Medium Enterprises Development Funds (MSMEDF) just a month before the expiration of his tenure in April 2015.

He was also said to have abused his office by collecting money to the tune of N4.3billion from the state coffers through the cashier of the Office of the Secretary to the State Government, Yusuf Gyang Pam.

Jang was docked alongside Pam, who was also accused of using his office for personal enrichment to the tune of N11.5million.

Count eight of the charge reads: “That you, Senator Jonah David Jang, whilst being the Governor of Plateau State between January and May, 2015 in Jos, within the jurisdiction of this Honourable Court, used your office as Executive Governor of Plateau State to confer unfair advantage upon yourself by collecting the sum of N4,357,195,000 (Four billion, Three Hundred and Fifty-Seven Million, One Hundred and Ninety-Five Thousand Naira) from the cashier of the Office of the Secretary to the Plateau State Government, and which sum was derived from the account of Plateau State Government, and you thereby committed an offence punishable under Section 19 of the Corrupt Practices and Other Related Offences Act, 2000”.

Particulars of count nine read:  “That you, Yusuf Gyang Pam, whilst being a cashier at the Office of the Secretary to the Plateau State Government on 11th July, 2014 in Jos, within the jurisdiction of this Honourable Court, used your office as cashier at the Office of Secretary to the Plateau State Government to confer corrupt advantage upon yourself by making a cash lodgment of the sum of N10,000,000 (Ten Million Naira) into your personal account with Zenith Bank and which sum was derived from the account of Plateau State Government , and you thereby committed an offence punishable under Section 19 of the Corrupt Practices and Other Related Offences Act, 2000.”

The defendants pleaded not guilty to the charge.

Upon their plea, counsel to the EFCC, Rotimi Jacobs (SAN), asked the court to fix a date for hearing and to remand the suspects in prison custody pending trial.

However, Robert Clarke (SAN), representing the defendants, informed the court that he had a pending “bail application for the 1st and 2nd defendants”.

He urged the court to admit the defendants to bail on self-recognition, saying “the first defendant was a former military governor, two-time civilian governor and currently a serving senator”.

Responding, Jacobs opposed the application and urged the court not to grant it, considering the weight of the offence. “The defence counsel’s submission was not based on law,” he said.

Justice Longji thereafter ordered the remand of the defendants in prison custody, and adjourned to May 24, 2018 for hearing of the bail application.