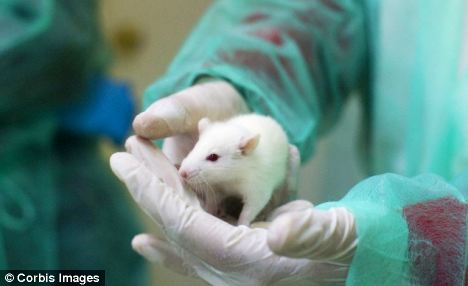 A mouse has been cloned from a single drop of blood, Japanese scientists have reported.

Blood cells from a donor mouse’s tail were collected and used to  make the cloned female mouse, which went on to reproduce and live a regular lifespan.

Japanese scientists have previously cloned mice using cells from various sources, such as white blood cells found in the liver and lymph nodes.

Blood cells from a donor mouse’s tail were collected and used to make the cloned female mouse, which went on to reproduce and live a regular lifespan

The difference this time was that the circulating blood cells, as they are known, were taken from the tail of another mouse.

The researchers, from the Riken BioResource Centre, wanted to find a straightforward source of donor cells to clone laboratory mice.

After extracting the blood, they isolated the white blood cells, and used the nuclei to do the cloning –  using the same procedure that created Dolly the sheep, BBC News reports.

The technique, called somatic cell nuclear transfer, involves a donor cell nucleus being transferred to an egg cell whose own nuclear DNA has been removed.

The egg develops into an early-stage embryo that is a clone of the donor, containing the same genes.

Stem cells taken from the embryo are ‘pluripotent’, having the ability – with the right coaxing – to mature into any kind of tissue in the body, from brain to bone. After extracting the blood, scientists isolated the white blood cells, and used the nuclei to do the cloning – using the same procedure that created Dolly the sheep (pictured)

The findings of the study, published in the journal Biology of Reproduction, state the researchers ‘demonstrated for the first time that mice could be cloned using the nuclei of peripheral blood cells’.

Furthermore, the cells ‘could be used for cloning immediately after collection and no donor animals need to be euthanised’.

Professor Robin Lovell-Badge of the MRC National Institute of Medical Research in London, told BBC News it was a ‘useful small advance on previous work showing that it is possible to clone mice from a variety of adult cell types, including white blood cells.

He added: ‘The efficiency of cloning from these cell types was very good, suggesting that even a small drop of blood will contain sufficient numbers…this is helpful if the intention is to use cloning to propagate and expand numbers of rare or valuable types of individual or species.