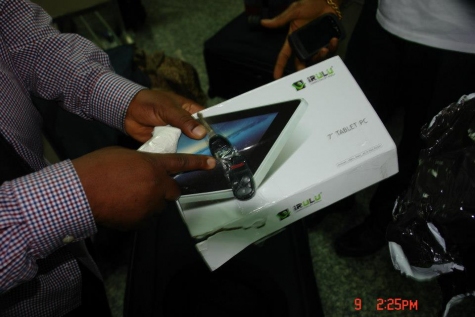 There was pandemonium last Friday at the Murtala Mohammed International Airport (MMIA) when passengers of Arik Airline from New York, United States, discovered that some of their luggage had been tampered with and valuables removed.

Passengers at the E-gate exit were so furious that they almost caused a scene at the airport but for the timely intervention of some custom officials.
After being cancelled on November 20 without compensation to any of the affected passengers, Arik Airline’s Flight W3108 departed John F. Kennedy International Airport in New York at about 7:30pm on November 22, and landed at MMIA at about 4:30am on Friday.

With the air conditioning systems not working, the conveyor belt started moving about 45 minutes later in the baggage claim section, rolling out the bags.

The area is currently undergoing renovation.

The conveyor belt operated fitfully, stopping for a short time on two occasions, and the bags arrived slowly.  It was when one of the passengers raised the alarm that his bag had been tampered with that some others went berserk.

One of the victims of the theft, Mr. Sylvester Mogole, described what happened as a shame.

“They took most of the things in my bag: cell phones, laptops and so on. I don’t really know all that is stolen yet but these ones have been stolen,” he said showing the reporter the torn packet of the Ipad and cell phones.

Another passenger, John Tobo, said he had two bags and discovered one had been tampered with.

“This has been tampered with but my concern is the other bag where I put more valuables, I am yet to get it. This is not fair at all,” he said.

Some of the affected pieces of luggage seemed to have been cut with a razor, going by the sharp cut patterns left on the bags.   Others had their padlocks broken.

As the passengers raised their voices and vented their annoyance, an unidentified member of the Arik staff to whom they complained tried to calm the passengers down before leaving, but it took the intervention of the Custom officials to achieve that.

When contacted on the issue, the Public Relations Officer of Arik, Ola Adebanji, said that he was not aware of the incident but would follow up on the issue.

“Normally when this happens, you report to the office and fill a form and we take it from there. I have not heard about this and will surely look into it. You know that we have a company that handles ground operations for us. Every airline has a handling agent so that when flights come they get the luggage out and put them on the conveyor belt for it to go.  It is a complicated thing because some of these things are not handled directly by the airline. But it is always the airline passengers will come to; they don’t know NAHCO or SAHCOL. It has been a long time I heard this kind of [this kind of] development and we will look into it,” he said.