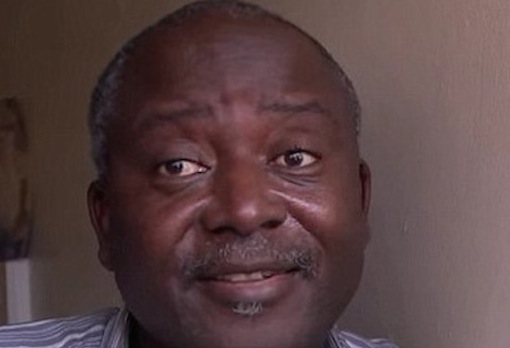 A Nigerian heartbroken granddad of the six year-old boy now dubbed Jihadi Junior by British media, revealed today that boy called him days ago begging him to save him, before ISIS made a video, in which the boy threatens to kill unbelievers.

In the video, Isa Dare, now said to be just four years (and not six years) old, was paraded in military fatigues and an ISIS bandanna while being made to declare: “We are going to kill the kaffir (non-believers) over there.”

He was brainwashed by ISIS fanatics after being taken to Syria three years ago by his mother, the Muslim convert Grace ‘Khadija’ Dare, 24, who had links to the killers of Lee Rigby.

His grandfather, Henry Dare, 59, said Isa made a desperate plea for help during a heartbreaking phone call just days before he featured in the barbaric stunt, saying: “Please save me.”

Mr Dare, who is also known as Sunday, told The Sun: “I am devastated they have used my grandson like that — they are using him as a pawn.” Child soldier Isa Dare seen in a sickening new execution video wearing military fatigues and being forced to declare: ‘We are going to kill the kaffir (non-believers) over there’ while pointing into the distance In 2014, Dare posted a shocking photograph to her Twitter account of her then four-year-old son Isa, meaning ‘Jesus’, holding an AK-47 rifle. He bears a remarkable similarity to the child in the latest propaganda video Jihadi bride: Isa Dare’s mother, Grace, who fled to Syria with him three years ago is seen with her husband, ISIS militant Abu Bakr, who is dead

But in an earlier interview, he said of Isa: “He’s my grandson. I can’t disown him.” He also urged his daughter to return to Britain to “face the music”.

He told Channel 4 she had called him from Syria ‘weeks ago’, having ‘brought shame’ on the family.

His daughter had told him she was going to Egypt to study and when he found out she was in Syria, ‘I dropped the phone on her because I was annoyed’.

Asked if he thought his grandson had any idea what he was saying in the video, Mr Dare – of Deptford, South-East London – said: ‘No – he’s a kid.

Grace Khadijah Dare is Isa’s mum and a Nigerian

Listen to Dare on Channel 4:
http://www.dailymail.co.uk/news/article-3385117/British-boy-4-dubbed-Jihadi-Junior-begged-grandfather-save-heartbreaking-phone-call-paraded-sick-ISIS-propaganda-video.html#v-4684974275001

“He’s a minor, he’s under five. He’s acting under the influence of ISIS guerrillas. He’s too young.”

Mr Dare added: “He’s propaganda. They are just using a small boy. They are using him as a shield.”

Mr Dare said he had reported Grace to the police on three occasions before she left for Syria and told them “she’s behaving in a very funny way”.

Talking about his feelings for his daughter and her family, he said: ‘I don’t want to have any contact with them.

‘They’ve let me down. I’m totally disappointed. She was a Christian, she was brought up in a Christian way – all of a sudden she decided to become a Muslim.’